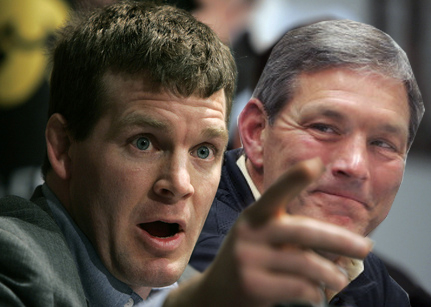 Iowa closes out the Carver-Hawkeye portion of their schedule with a dual meet against Michigan, 9-3 on the season and ranked 11th in the nation. Michigan did upset Minnesota a few weeks ago, 19-14, and they do have a number of dangerous wrestlers, so this might not be a lay-up for Iowa. But Iowa’s still a solid favorite in the dual. Let’s break it down….

#5 Thomas Gilman (RS FR, 15-3) or Cory Clark (RS FR, 13-0) vs Conor Youtsey (RS FR, 15-8)
TONY: I’ve been saying all year that Cory Clark will be the starter at 125 pounds and I am sticking with it. Clark should have no problem getting bonus against Youtsey. Clark needs a solid win this week and then a convincing win against Wisconsin’s Taylor.
IOWA 4-0

ROSS: Gilman or Clark, Clark or Gilman? It’s not an easy call, but Clark looked impressive in his major decision win last week at Northwestern, so I would suspect that we’ll see him again here. Youtsey is fresh off a 2-0 upset win over #9 Tim Lambert (Nebraska), so he’s not a slouch. I’ll take Clark via decision.
IOWA 3-0

#3 Tony Ramos (SR, 20-2) vs #19 Rossi Bruno (SO, 15-11)
TONY: What an opponent for Tony to finish his career at Carver. I think Ramos will definitely get bonus points in this match after watching Gulibon beat Bruno by major decision. Ramos will end his career 34-0 all-time at Carver. He will be missed. The crowd should give him a standing ovation after a fall!
IOWA 10-0

#9 Josh Dziewa (JR, 21-4) vs #13 Steve Dutton (JR, 4-2)
TONY: Dziewa has been on a tear in B1G dual meet action, going 6-0 and scoring the fourth most dual points on the team. He has been a big lift for the Hawkeyes at this weight class. This match is another big test for Dziewa in my eyes. Dutton wrestles smart and is good in all positions. These are the type of wrestlers Dziewa will have to step up and defeat to make sure he gets on the stand in March. Look for a close match with Dziewa coming out on top.
IOWA 13-0

ROSS: Dutton hasn’t wrestled much this year due to injuries, but he’s a dangerous opponent. It will be interesting to see how Dziewa approaches this match; he hasn’t always had the easiest time scoring points from neutral and Dutton doesn’t figure to make too many mistakes for Dziewa to exploit. I think this is close to a toss-up, but since this match is on Carver-Hawkeye Arena, I’ll favor Dziewa. Dziewa via decision.
IOWA 12-0

#12 Brody Grothus (SO, 19-8) vs #7 Eric Grajales (SR, 17-7)
TONY: Brody is coming off a disappointing loss to Alex Tsirstsis which hurt his seeding for the B1G tournament. This match is a good opportunity for him to get some momentum back. Grajales is clearly not the same wrestler from previous seasons. Has he already peaked? Will he gas out? Grothus has wins over-higher ranked wrestlers, so a win here is not out of the question.
IOWA 13-3

ROSS: This is an interesting match. Grajales won a crazily entertaining match over Penn State’s Andrew Alton last week, but Alton (surprise surprise) gassed badly in that match, allowing Grajales to make a furious before eventually winning with a pin when Alton appeared to just flat give up. But Grajales himself appeared to gas in a 10-3 loss to Nebraska’s Jake Sueflohn on Friday night. Grothus has shown a pretty good gas tank so far this season, so if he can keep it close into the third period, he could have a great chance at an upset. That said, I’m not quite ready to pull the trigger on that upset. Grajales via decision.
IOWA 12-3

#2 Derek St. John (SR, 21-2) vs #14 Brian Murphy (FR, 13-4)
TONY: DSJ showed us against jNW that those two losses were a minor speed bump on the road to March. Murphy is a solid opponent and he really impressed me in his match against Alton last week. There are some rumblings that Murphy is dinged up so we could see bonus at 157 pounds if they throw back-up Jake Salazar (2-6) on the mat. Either way, DSJ should get his 98th career win in this match. He’s just two wins away from becoming the 40th Hawkeye in program history to record 100 career wins. Sure will miss this tough-nosed Iowa boy.
IOWA 16-3

ROSS: Murphy gave Alton everything he could handle a week ago, just barely losing in OT to the upperclassmen. Murphy also took James Green into OT (lost, 7-5) and knocked off Dylan Ness, 5-3. He’ll be a tough opponent for DSJ. That is, if he wrestles. Salazar wrestled in the Nebraska dual on Friday night — and took Green into OT himself, losing 7-6 in the tiebreaker periods. Still, I’m not betting against DSJ in his final match at CHA, no matter who Michigan sends out there. DSJ via decision.
IOWA 15-3

#4 Nick Moore (JR, 16-2) vs #6 Dan Yates (SR, 16-3)
TONY: Nick Moore faces another ranked opponent in Yates and he can solidify his spot on the bottom of the bracket (and away from David Taylor) with a win Sunday. Moore has never wrestled Yates, but I expect a tough match between two upperclassmen. Moore needs as much confidence as possible going into March because I have him top three in the nation. Moore via decision.
IOWA 19-3

ROSS: Welcome to one of your two Matches of the Day (the other one’s at heavyweight), with a pair of top-6 wrestlers squaring off. As Tony said, this is the first time Moore and Yates have faced one another. Yates has a salty 16-3 record and two of his three losses have come to the top two guys at 165, David Taylor (who crushed him via tech fall last week, 17-2… but it was David Taylor, yanno?) and Nick Sulzer (Virginia). This should be a great test for Moore and a win here could give him great confidence with the Big Ten Tournament just a month away. That said, this is another toss-up match, and I just can’t give them all to Iowa. Yates via decision.
IOWA 15-6

#5 Mike Evans (Jr. 20-3) vs Collin Zeerip (Jr. 16-10)
TONY: Evans has been progressing and Zeerip has been regressing. Evans will be hungry after receiving a forfeit at Northwestern. Evans should find his stride and should be looking for bonus points against Zeerip. Believe it or not, Evans has scored bonus points in 17 matches this season.
IOWA 23-3

ROSS: Michigan just has a neverending supply of Zeerips, don’t they? Jeez. Anyway, we’ve seen this story plenty of times this year: Evans might have his struggles with the top guys at this weight, but he’s done a good job of dominating the lower-end guys at this weight. Zeerip isn’t a top guy. Ergo, bring on the ‘Stache bonus points. The ‘Stache via major decision.
IOWA 19-6

#4 Ethen Lofthouse (SR, 17-2) vs #16 Domenic Abounader (FR, 11-6)
TONY: Barring an injury this week, we should see Lofthouse on senior day. A senior versus freshman should be a great opportunity for Lofthouse to get some mat time. Lofthouse gets the major decision!
IOWA 27-3

ROSS: The top 184ers haven’t had too much trouble dispatching Abounader this year. Ed Ruth beat him via tech fall (17-2) a week ago, Kevin Steinhaus beat him via 12-5 decision, and Jimmy Sheptock beat him via 10-2 major decision. If Lofty is a top 184er, it’s not unreasonable to expect him to be able to do something similar here. That said, I’ll go with Lofthouse just missing a major decision and winning a comfortable decision.
IOWA 22-6

#16 Nathan Burak (SO, 10-3) vs Chris Heald (JR, 7-15)
TONY: Burak continues to win battles. My excitement for Burak is diminishing. There shouldn’t be anything too exciting about this match. Burak should win by a comfortable margin, but you never know.
IOWA 30-3

ROSS: Heald is 1-9 in his last ten matches and he’s given up bonus points in five of those losses, including two pins and three major decisions. So yeah: this should be a comfortable win for Burak. Burak only has two bonus points on his resume this year, so he could use a strong win here to maybe give him a jumpstart heading into tournament season in March. But I’ll go with a comfortable decision win for Burak.
IOWA 25-6

#3 Bobby Telford (JR, 17-2) vs #2 Adam Coon (FR, 25-1)
TONY: Both of these wrestlers are coming off tough losses recently. Mike McMullan took the wind out of Telford’s sails last week with a 3-1 win in sudden victory, while Coon suffered his first loss on the season a few weeks ago against Michigan State’s Mike McClure, 5-1. This weight is a mess. Carver should be rocking for this match-up and I have Telford getting his revenge.
IOWA 33-3

ROSS: Carver might be rocking… until they spend the first several minutes of the match locked up and butting heads. Woo heavyweight wrestling! Anyway. Coon has had a tremendous freshman season, that hiccup against McClure aside and beat Telford earlier this season, 3-2, in the finals of the Midlands Championships. Telford finally got his elusive white whale and beat Minnesota’s Tony Nelson a few weeks ago, but he fell to Northwestern’s Mike McMullan last week in a match where he just didn’t generate enough offense or make enough happen. I think Coon gets the ever-decisive takedown and holds on for victory. Coon via decision.
IOWA 25-9

Tony has the over, and I’ve got the under. That didn’t work out so well for me last week…

Go ahead and use this post as your live thread for the dual, too. We’ll update results in the comments.

BONUS! If you want to see two of the other best teams in the country tussle, Minnesota and Penn State are facing off in Minneapolis on BTN at 1 PM CST on Sunday. There should be plenty of interesting matches to watch there.