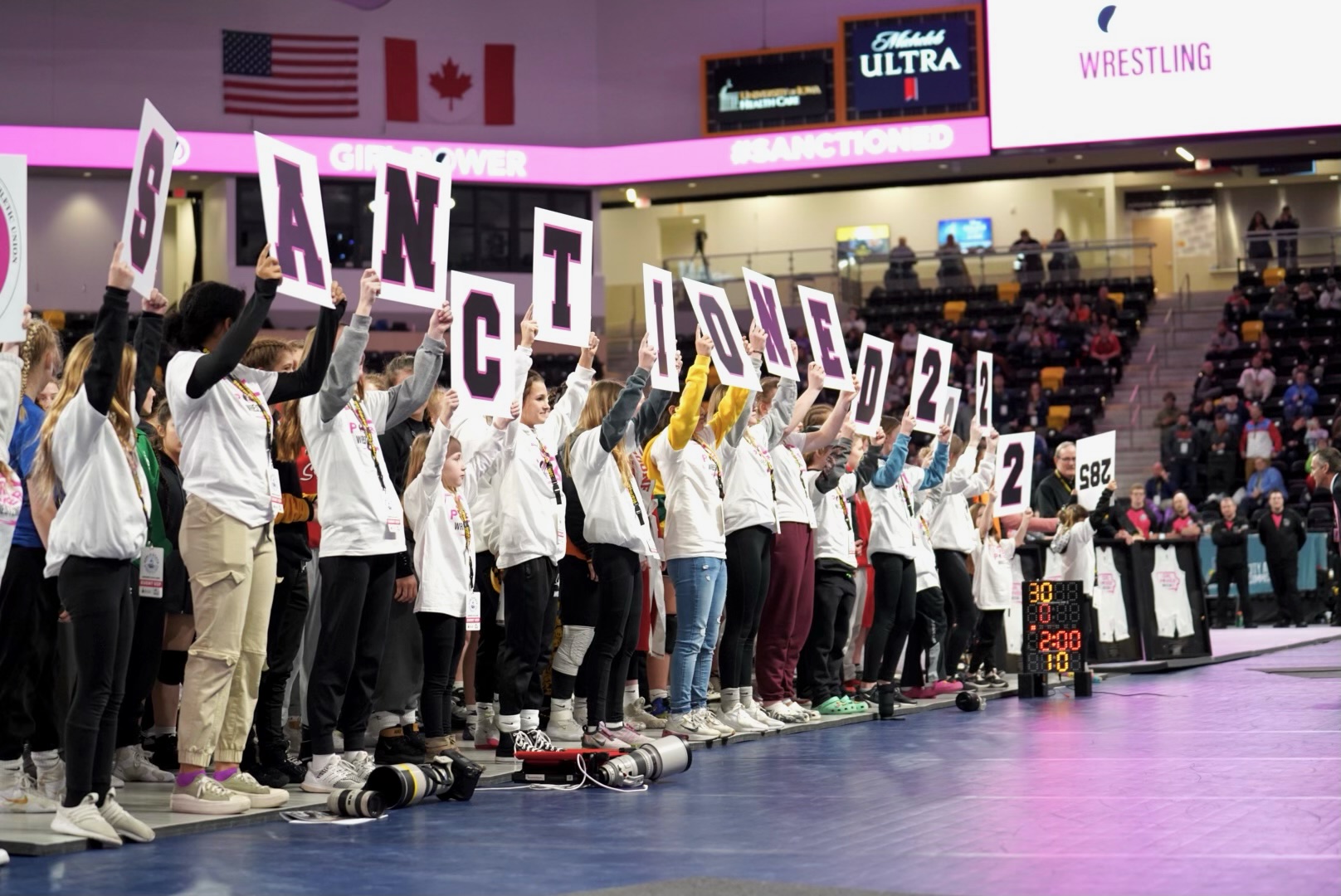 The moment girls wrestling in the state of Iowa has been building towards is finally here. Today, prior to the start of the Iowa Wrestling Coaches and Officials Association (IWCOA) state finals, the sport of wrestling was officially sanctioned by Iowa Girls’ High School Athletic Union (IGHSAU). Girls wrestling will officially begin as a new sport in the 2022-23 season.

It’s a landmark moment for both the sport and the state. Iowa has long been considered one of the premiere wrestling states in the country and by sanctioning the sport for high school girls, Iowa makes it clear it intends to maintain that status moving forward.

While this movement has been years in the making, the origins of the IWCOA state tournament began three years ago in Waverly.

On a cold and snowy January day, 87 wrestlers competed at the first ever IWCOA state tournament at Waverly-Shell Rock high school. The tournament continued to grow eventually hitting a point where it moved into Coralville’s Xtream Arena in year three, and the tournament returned in 2022 with record numbers.

This year 695 girls competed at the state tournament, up from 457 in 2021. Almost eight times the size of the initial tournament held back in 2019.

As the IWCOA tournament has grown, so has the participation numbers for girls across the state of Iowa. While several programs boast large numbers for their teams, the 2022 state tournament saw participants from 158 different schools.

The state of women’s wrestling in Iowa has been rapidly growing extending even to the college level. The state was already home to programs at Grand View, Waldorf, William Penn, Iowa Wesleyan, and Indian Hills Community College. Wartburg and Simpson also plan to add a women’s program in the near future.

Earlier this year the University of Iowa also became the first power five program in Division I to announce the addition of the sport. The program hired two-time Olympian Clarissa Chun to head the program in Iowa City.

With the storied history of the men’s program well known, the University is clearly looking to establish themselves as a power in the women’s realm. It’s no secret that the men’s history was built in large part thanks to a strong contingent of Iowa natives.

With the level of talent currently coming through the Iowa ranks, there is no reason to think coach Chun won’t look to use that same blueprint.

The state has its fill of talent. Currently there are 14 nationally ranked wrestlers in the state of Iowa, and produced four All-Americans at Fargo last summer.

The Iowa Girls High School Athletic Union Board of Directors voted unanimously to sanction girls wrestling as the organization’s 11th sport. The vote was made at the IGHSAU’s January 12th board of directors meeting and was announced prior to the start of the championship round of the IWCOA Girls State Wrestling Tournament Saturday in Coralville. The first IGHSAU-sanctioned season will take place during the 2022-23 school year.

“We think there’s a great foundation in place for the success of this sport and we intend to fully support these Iowa Girls as they continue their pursuit of championships,” said IGHSAU Executive Director Jean Berger. “As the sanctioning process unfolded, the Board was able to quickly approve this new opportunity for our girls and schools across the state. The increase in participation, the growth in youth wrestling and the willingness of our schools to commit to the sport all factored into this decision.”

The IGHSAU intends to follow the National Federation of State High School Associations (NFHS) wrestling rules and guidelines. The next steps in this process include meeting with an appointed IGHSAU wrestling advisory committee this winter to finalize details for this roll-out year that include format for the season, classification system, weight classes, and postseason/tournament details.

“The journey to sanctioning girls wrestling as a sport for the IGHSAU has been a labor of love,” said IGHSAU Associate Director and wrestling administrator Erin Kirtley. “I’m honored to have been given the job as a catalyst to get this part of the process accomplished for the girls in our state. While we have closed the book on formal sanctioning, we look forward to opening the next one now as we highlight all the great stories our female wrestlers are continuing to write. The IGHSAU has said from the beginning that our intent is to do what is best for the girls who participate. We look forward to giving them the same amazing experiences as the other ten sports under our umbrella, and to leave nothing spared when it comes to building them as student athletes and leaders. We also look forward to supporting the coaches and officials who serve alongside these athletes, and to give their fans a greater appreciation for what these females already do day in and day out.”

To date, 58 schools have committed to sponsoring girls wrestling programs in Iowa. The latest data from Trackwrestling.com shows 1,018 girls participating in high school wrestling, represented by over 185 Iowa schools.

Wrestling becomes the 11th sport to be sanctioned by the IGHSAU and the first since bowling was added in 2007. Iowa becomes the 34th state association to sanction girls’ wrestling.