Skip to content
Dan Gable Ms. and Mr. Wrestler of the Year 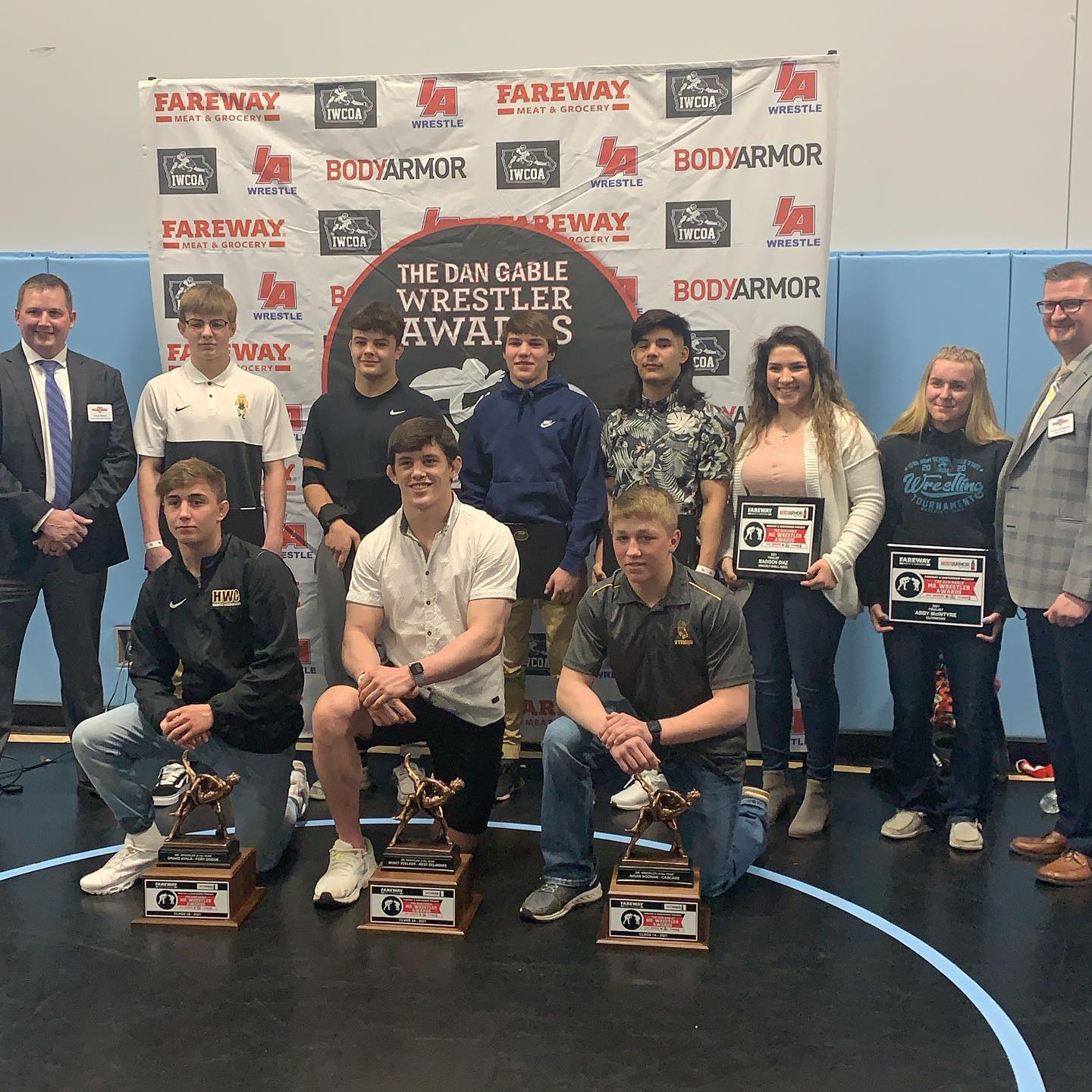 Fareway Stores, Inc. and BodyArmor Sports Drink present the Dan Gable Ms. & Mr. Wrestler of the Year Awards in coordination with IAwrestle and the Iowa High School Wrestling Coaches and Officials Association (IWCOA). Three finalists from each of the three state wrestling classes, regardless of their year in school and weight class, have been selected by fan and IWCOA committee votes. In addition, three women finalists have been selected for the Ms. Wrestler Awards. The top three were invited to the awards ceremony in Sioux City where the top wrestler in each class will be awarded the Dan Gable Wrestler of the Year trophy.

MR. WRESTLER OF THE YEAR

This is the third time that Drake Ayala has been named a finalist for the Dan Gable Mr. Wrestler of the Year Award. The Fort Dodge prep recently wrapped up his career as a three-time state champion. This season Ayala has lived up to his billing as the top wrestler in the state of Iowa. Prior to the start of the year he became the second Iowa native to win the Super 32 and he also defeated the nation’s #1 pound-for-pound wrestler at Flowrestling’s Who’s Number One event.

In the regular season Ayala claimed victories over 2A state champion Matthew Lewis, 1A state finalist Stieve Barnes, and 2A finalist Dominick Ridout. He did suffer one loss on the regular season after bumping up a weight class to take on another talented Iowa prep. He later avenged that loss in the state finalist giving him a total four wins on the year against Iowa state finalists. He joins Brody Teske as Fort Dodge wrestlers to win the award, Drake Ayala.

Two-time state finalist Ryder Block is a first-time finalist for the Dan Gable Mr. Wrestler of the Year award. He joins Madison Diaz giving the Go-Hawks two finalists for the award in 2021. As a freshman Block put together an undefeated season to win the 106-pound state title for the Go-Hawks. As a sophomore bumped all the way up to 132 pounds. He entered the state tournament with an undefeated record and finished second behind Drake Ayala of Fort Dodge.

For the third straight year, Southeast Polk has a Mr. Wrestler finalist. This year’s finalist is 113-pound state champion Nate Jesuroga. After taking third as a freshman, Jesuroga came back with a vengeance in 2021 going undefeated on the way to winning his crown. In addition to being perfect at 113, Jesuroga also bumped up and defeated Ankeny’s Trever Anderson in a dual. Anderson finished the year as the 120-pound state champion. He finished the year 31-0 with 28 bonus wins.

Crestwood, Cresco’s Carter Fousek finished the season a perfect 33-0, claiming his third state title in the process. After winning titles at 106 as a freshman and 113 as a sophomore, Fousek jumped up to 126 where he was truly dominant. 25 of Fousek’s 33 wins were by bonus, including 20 by fall. In addition to success insider the state of Iowa, Fousek has also performed at a high level on a national level, reaching the finals of USA Wrestling’s freestyle nationals.

Another 2A wrestler that captured his third individual state title in February is Solon’s Haydon Taylor who brought home the 160-pound crown in Des Moines. As a junior, Taylor had an undefeated season with an impressive 33 bonus point victories. After winning titles at 126 as a freshman and 145 as a sophomore, Taylor will be one of four wrestlers in the hunt to win a fourth state title in 2022.

With a breakout year, West Delaware’s Wyatt Voelker will claim the Dan Gable Mr. Wrestler of the Year award in Class 2A. Not only was the junior undefeated, 39 of his wins were bonus victories including all of the matches in his state title run. The only two matches that Voelker did not win by bonus was against 3A state finalist Jake Walker, and 2020 state runner-up Jackson Kinsella.

Voelker’s year long dominance is a true hallmark of a Mr. Wrestler of the Year.

Robert Avila wrapped up his third state title this year for the Lions. Avila capped off his title run by defeating a two-time state finalist in his season finale. This is his second time as a finalist for the Mr. Wrestler award, which makes him the third Lion wrestler to accomplish this feat since 2011. He’s a former Preseason national champion and Fargo All-American in Greco-Roman.

Winning his third state title in 2021, New London Junior capped off his first, perfect season on the way to a title at 120 pounds. This year, Marcel Lopez defeated fellow 2020 state champion Brandon Paez for the title. He defeated three ranked wrestlers to win the bracket including shutout victories over the #2 and #3 ranked wrestlers.

Cascade senior Aidan ends his career on a historic note capturing his third state title at 132 pounds. After not qualifying for the state tournament as a freshman, Noonan made the most of his remaining state tournament appearances going undefeated as a sophomore, junior, and senior. As a junior he made history by becoming the first wrestler to thwart a would-be four-time state champion in the finals. As a senior he defeated a fellow 2020 state champion Gable Porter in the finals by a score of 6-2.

He’s committed to wrestle for the University of Wyoming, and your Dan Gable Mr. Wrestler of the Year in Class 1A, Aidan Noonan.

MS. WRESTLER OF THE YEAR

After moving to Iowa from the Sunshine State, Madison Diaz put in a truly dominating season for Waverly-Shell Rock. She was a perfect 22-0 this season with 20 of her wins coming by fall. She was an AAU and IWOCA state champion. Prior to the start of the season, Diaz established herself among the best in the country by taking fifth place at the prestigious Super 32 tournament. She joins Ryder Block as award finalists from her school and is committed to wrestle at Grand View next year.

From Glenwood, Abby McIntyre closes out a truly historic career in Iowa having won six state titles. In February she won her fourth AAU state title by pinning all of her opponents, and all falls were recorded prior to the third period. In addition to her AAU titles, McIntyre is also a two-time IWOCA state champion winning back-to-back in 2020 and 2021. She is committed to wrestle at Grand View next season.

Bettendorf standout Ella Schmit capped off a historic season in 2021 putting her in elite company in the state of Iowa. In January she became a three-time IWOCA state finalist and won her second title by pinning her way through the bracket. In February, she became the third girl’s wrestler to qualify for the boy’s state tournament and then became the second girl to win a match at the tournament. Her other accomplishments include a 2020 AAU state title and runner-up finish the year prior.

She joins Bettendorf graduate Fredy Stroker in award winners from her school. Your 2021 Ms. Dan Gable Ms. Wrestler of the year.

One thought on “2021 Dan Gable Mr. and Ms. Wrestler of the Year Award Winners”