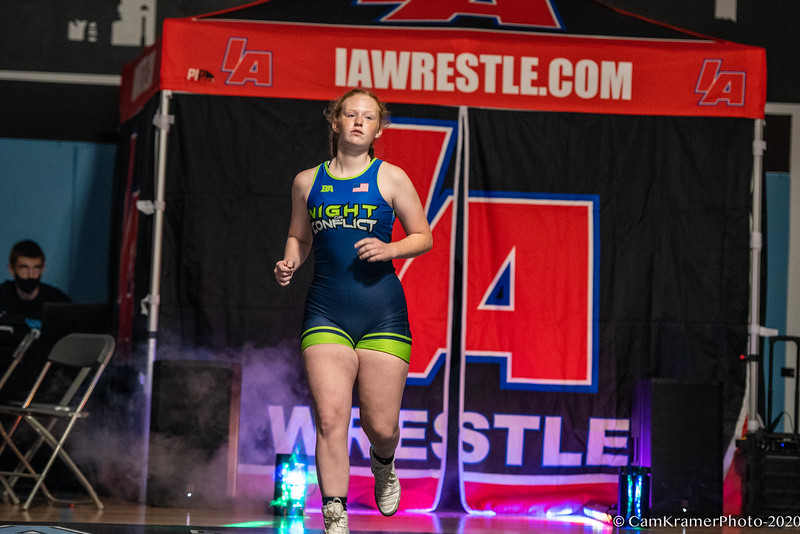 Since many of the brackets vary in size from 16 to 64 person it will be hit and miss how many good opening round bouts we will have. So I’m going to focus more on just fun early-round matches to watch on Friday afternoon. With the event growing by over 100 girls from last year it will be hard to pick just a few but these 6 matches should be some fun ones that you should keep an eye on when your competitor isn’t on the mat!

Rogalla comes in with a 5-2 record and Davis enters at 14-2. They come from completely different ends of the state on the east and west borders and haven’t met but this should be a great test for both. They have both had some big wins and the only losses are to highly ranked girls. The winner will likely face #5 Yareli Morales (Sioux City East) in the quarterfinals.

This is one of the most intriguing matches to me of the first couple of rounds! Connell comes in at 21-5 and has had some huge wins this season!! Shepherd is one of the best wrestlers in this great freshman class and enters the tournament with a 16-3 record! Both of these girls will get after it and it is sure to be an exciting match! This is a wide-open bracket with no clear-cut favorite and this match could play a huge part in determining the placing early on.

We don’t get to see many ranked matchups in the round of 32 but we get one here with a couple of very good freshmen. Sternhagen won a head to head matchup early in the season but Esmoil has really come on in the last few weeks and just won a good bracket in Independence and avenged some losses along the way. An early loss will create a long road on the back side.

You might be wondering why I have a match between two unranked girls in here but don’t sleep on either one of these girls. Henderson is a two-time state place winner already as a junior and has been ranked almost the entire season. Briggs is a name that has been around a while too and has had some really nice wins. Either one of these girls could be ranked at a lot of weights and 138 is just very deep. Don’t be surprised if the winner finds herself in the quarterfinals here.

This should be a fun matchup between two girls who have been gaining steam as the season wore on. Lewis has wrestled a little over the last couple years but did not compete at the state tournament last season. Blockhus is a first-year wrestler who has really been wrestling great since shifting her focus solely to wrestling this winter.

Boleyn is actually the returning state runner-up but comes in with a few losses as of late. Elizondo has had a great season and has some really big wins on her resume. The winner of this match becomes the favorite to reach the quarterfinals.

One thought on “2021 IWCOA Girls State – Early Matches To Watch”