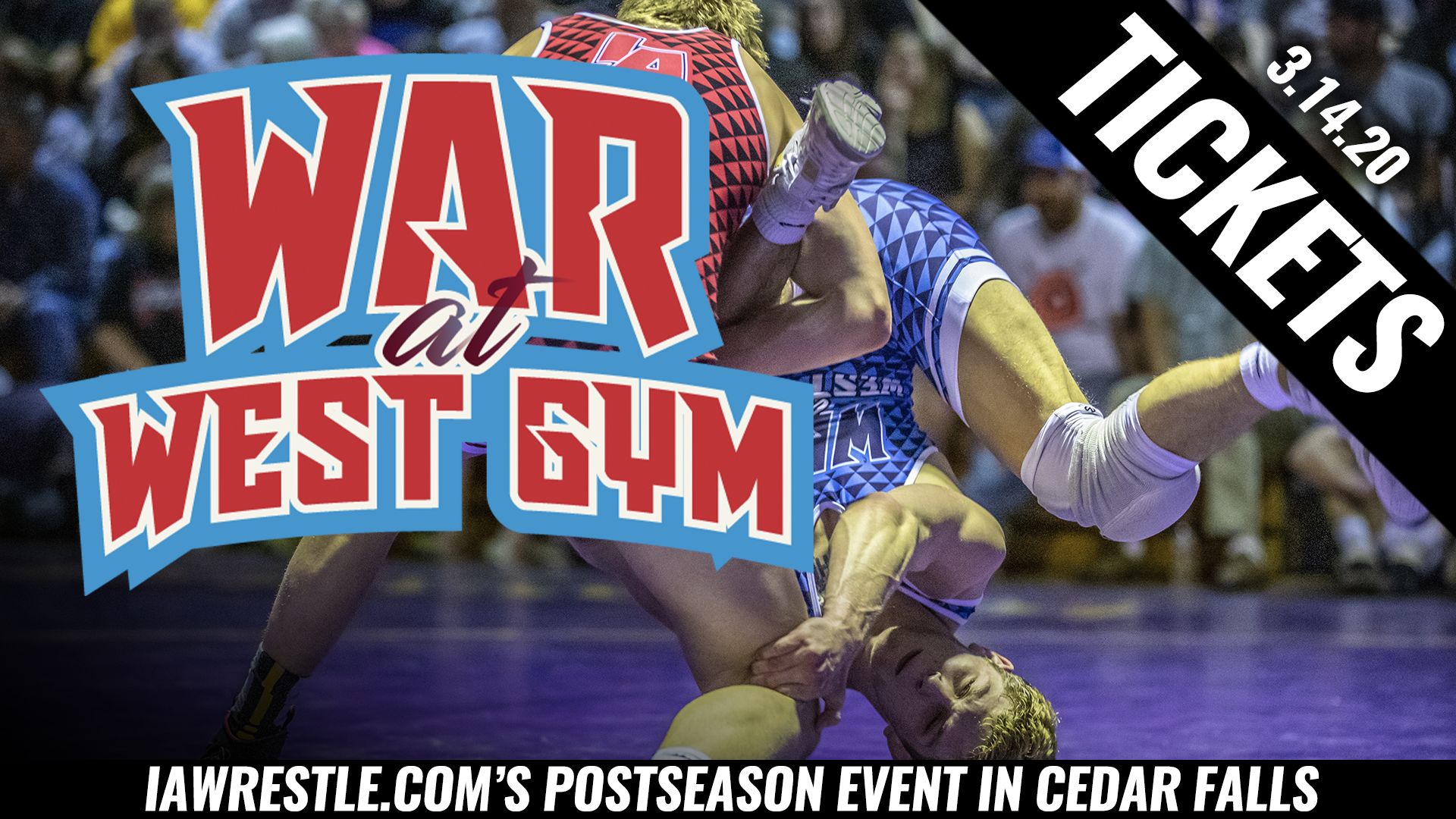 Here we have a battle of 2A state champions, with Kauzlarich making the jump up a weight to take on Schropp. In last month’s state finals Schropp defeated Kauzlarich’s teammate, Nathaniel Genobana 8-3 to claim his state title.

We’ve got ourselves a bonafide heavyweight matchup for fans to look forward to when Greenlee and Buss square off this Saturday. Both wrestlers are coming off of breakout seasons and this match will set up a meeting between two of the state’s top wrestlers at this weight. In Class 1A Buss capped off a perfect season by winning a state title, while Greenlee finished second behind Bettendorf standout Griffin Liddle. This will be a battle between our third and fourth All-Class team wrestlers.

This matchup features two individuals that didn’t get what they wanted at the 2020 IWCOA Girls State Championships. Ross finished 16-1 as a freshman placing third at the state. Grimm finished with a runner-up finish at 126 pounds. Grimm will be bumping up a weight class to wrestle Ross. Both girls are coming off AAU State titles from two weeks ago.

In the late stages of the 2019-20 season, Gmbrall made the decision to cut down from 152 to 145-pounds and the move ended up paying huge dividends as he ended February with a state title. Now he will be tested once against Rahnavardi who dropped three weights from the 2019 state championships and came away with a runner-up finish. In our All-Class rankings Rahnavardi came in third, while Gambrall was given the fifth spot, despite his title. A win for the Iowa City West Trojan could significantly boost his profile.

Coming from the state out west Kunz is coming of a state championship season in Nebraska and will go up against two-time state finalist Taylor in this West Gym battle. After winning a title in 2019, Taylor was felled by fellow Sebolt clubmate Cullan Schriever in this year’s finals. Does being an Iowa runner-up hold more value than being a Nebraska state champ? This is one match that will put that theory to the test.

Mariah Websiter form Colfax-Mingo is a late addition to the event filling in for Abby McIntrye. Webster was 124lb runner-up at AAU state this weekend and Luft finished in third place at 130lbs. Both girls are improving and looking to put their name on the map this weekend.

Here we have a battle between the state’s 1A and 3A state champions. In our final All-Class rankings Lars gave the nod to Fulcher over Griffith for the first team slot, so Griffith will have the opportunity to re-write who should be considered the state’s top 170-pound wrestler.

I will give a lot of props to Lars and Hager for assembling a great card and while there are some really good folkstyle matches on the slate this one might hold the most intrigue. There is no question that Ahrendsen is emerging as an extremely bright talent in our state, but freshman Naaktgeboren already looks to have a bright future after watching his first season. Obviously the edge will be given to the more seasoned Ahrendsen, but Naaktgeboren’s talent this could be a really good measuring stick.

Answering the call at 152 is Phillips, who will be moving up two weight classes to face off with fellow Class 3A state champions Yant. This is a match that should definitely engage the crowd aspect. If history is any indicator both Fort Dodge and Waverly-Shell Rock travel well to this event and we all know the type of matches the West Gym can produce.

What many anticipated as being the state finals match at 113 in Class 3A instead Anderson was victim to an upset and wrestled back for third, and Roybal defeated Anderson’s foil (Ryder Downey) to win his first state title. While this won’t be the match many wanted to see last month (since it’s in freestyle) this should still be a fantastic matchup.

This should be an entertaining bout between talented freshman Kueter who won the 3A 160-pound title but will be moving up to take on 2A runner-up Mooberry. In our All-Class rankings, Kueter was second at 160, while Mooberry was fifth at 170. But don’t let that deceive you. Mooberry’s length can give opponent’s some serious issues and Kueter will have to combat that while moving up a weight.

Class 3A had three wrestlers nationally ranked in the top 20 at 106 pounds, and at the end of last month’s state tournament, Jesuroga finished in the third-place spot behind Ryder Block and Brandon O’Brien. Now he will look to get back on track against a tough opponent, the Class 2A state champion Phetxoumphone. In our final All-Class rankings Phetxoumphone edged Jesuroga for the fourth spot (also behind Block, O’Brien, and 1A’s Gable Porter).

Sage Walker vs Thomas Even

Here we’ve got the 2A state champion Walker taking on 1A state champion Even for a match of class dominance. Our All-State list had Walker nudging Even for the top spot, so Even will be eager to take this match to try and claim top billing.

This year’s state tournament already provided us with what a folkstyle meeting between these two wrestlers would look like, so kudos to the duo for opting to compete for this match in freestyle to give us another look. One may favor Taylor over Thomsen based on Taylor’s known freestyle prowess he’s displayed for Team Iowa at USA Wrestling events. After a barn burner folkstyle match hopefully, we get a show when the pair switch to freestyle.

The main event and piece de resistance will pit Ayala, the state’s top overall prep wrestler, against Burks, potentially the best prep from neighboring Nebraska. While Ayala hasn’t picked a college Burks could still be considered as a future college rival with several of Ayala’s more notable landing spots Iowa, Iowa State, and Northern Iowa all holding annual duals with Oklahoma State, which is where Burks’s future awaits. These two should also be prominent contenders for USA Wrestling Junior World Team spot later this summer.