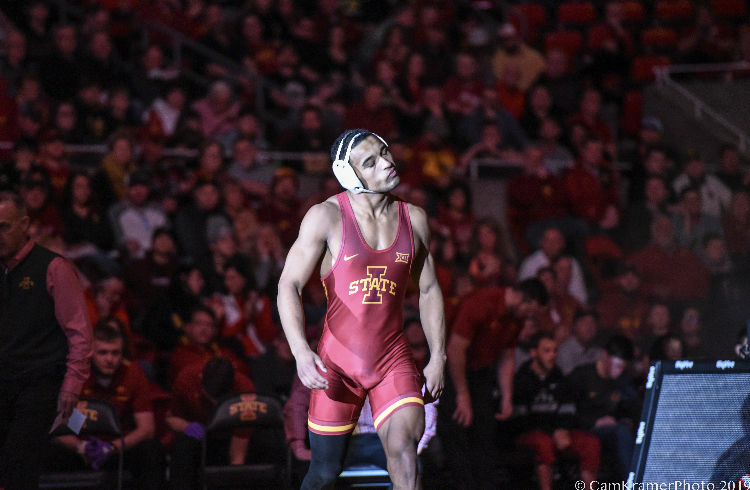 How It Happened
Junior Jarrett Degen and sophomore Marcus Coleman were the ISU pinners against West Virginia. Degen was an offensive force, scoring on four takedowns, a reversal and six nearfall points before bringing Liam Lusher to his back in 4:19.

The shortest match of the night provided the most excitement. In just 24 seconds, Coleman cradled Jackson Moomau and turned him to his back, bringing all 3,362 Cyclone fans in attendance to their feet.

Small took on WVU’s Lucas Seibert at 133 pounds. The Suwanee, Ga., native got out to a fast start, tallying three first-period takedowns. He would go on to add three more in the second and third periods and racked up a total of 2:52 of riding time in a 15-7 victory over Seibert.

At 141 pounds, Parker advanced to 11-1 in dual action this season, earning his fifth major decision victory of the year. It was a workman-like match for Parker, taking Caleb Rea down three times and riding the Mountaineer for 2:34 to win it 8-0.

The 174-pound bout featured Colbray vs.WVU’s Scott Joll. Colbray’s high-powered attack was on display. The junior amassed six total takedowns in the match. He took control of the match with a four-pointnearfall to close out the second period. In the end it was Colbray over Joll, 18-7.

Gremmel closed out the match for ISU in style. He scored on three takedowns, a pair of two-point nearfalls, an escape and riding time to best Sean Mullican by 12-1 major decision.

At 165 pounds, Chase Straw gutted out a 4-1 victory over nationally-ranked NickKiussis. Straw took Kiussis down in the first period, which proved to be the difference in the contest.

Next Up
Iowa State has a quick turnaround as it’s set to host No. 19 UNI in Hilton Coliseum tomorrow afternoon at 2 p.m. Fans are encouraged to arrive early because the Cyclones will be recognizing Dan Eslick, Chase Straw, Hank Swalla and Joe Teague prior to the dual for Senior Day. The contest between ISU and UNI will be on Cyclones.TV and FloWrestling.