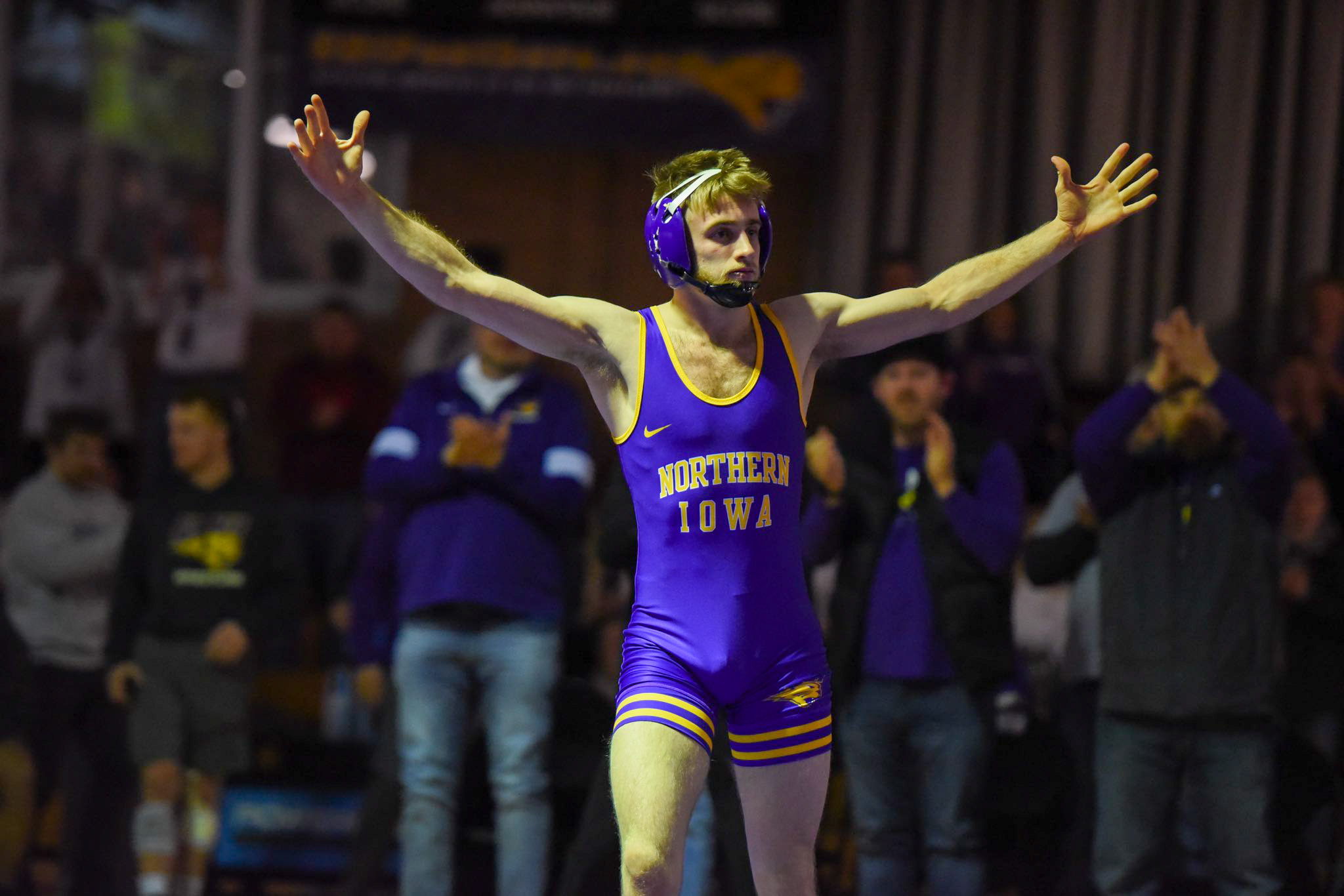 Three Panther seniors earned pinfalls and UNI rolled West Virginia 36-6 on senior night in the West Gym. Jay Schwarm, Bryce Steiert, and Taylor Lujan all earned the falls, while Jack Skudlarczyk and Max Thomsen both had wins with bonus points.

Jay Schwarm closed out his senior year in the West Gym with his 65th fall of his career and his 12th this season. He took Joey Thomas down very quickly and wrapped up a fall and eventually the fall.

At 133 pounds Jack Skudlarczyk had no problem taking down Lucas Seibert, winning 14-3. Skudlarczyk used a pair of nearfalls to build his to 13-1 before getting ridden out for most of the third period.

Michael Blockhus seemed to be in control of his match against Caleb Rea, leading 9-3 in the third period before Rea hit a reversal and four point nearfall to take an 11-10 lead with 23 seconds left in the match. Blockhus was unable to score again and with the riding time point awarded the pair went to sudden victory. After a scoreless minute of sudden victory, Blockhus was able to get an escape in the first thirty-second rideout. With Rea choosing down in second thirty seconds, Blockhus was able to ride him out and secure the win.

Senior Max Thomsen put on a takedown clinic for the fans, racking up six of them along with a four point nearfall in the first period and a reversal in the third to earn a 21-6 tech fall win over Liam Lusher.

Austin Yant came out after intermission and won a match against Nick Kiussis, scoring early and getting a reversal to lead 4-2 after the first period. Earning another takedown in the second and riding Kiussis out in the third, Yant won going away 8-2.

The #5 and #4 ranked wrestlers in the country both earned pinfall wins for the Panthers. Bryce Steiert wasted little time, getting his in just 1:03 after loading up Scott Joll after a quick takedown.

Taylor Lujan took a little while longer to secure his fall, getting it in 5:47 after scoring takedowns every way you possibly could against Jackson Moomau; he had eight total before finishing things out.

Carter Isley wrapped things up with a 6-2 win over Sean Mullican. He built a 5-1 lead after the second period and held off Mullican at the end for the win.

The Panthers are next up in two days as they head to Ames for a conference battle with Iowa State. The dual starts at 2 PM and we’ll have live coverage from Hilton.