Class 3A District Brackets to Watch 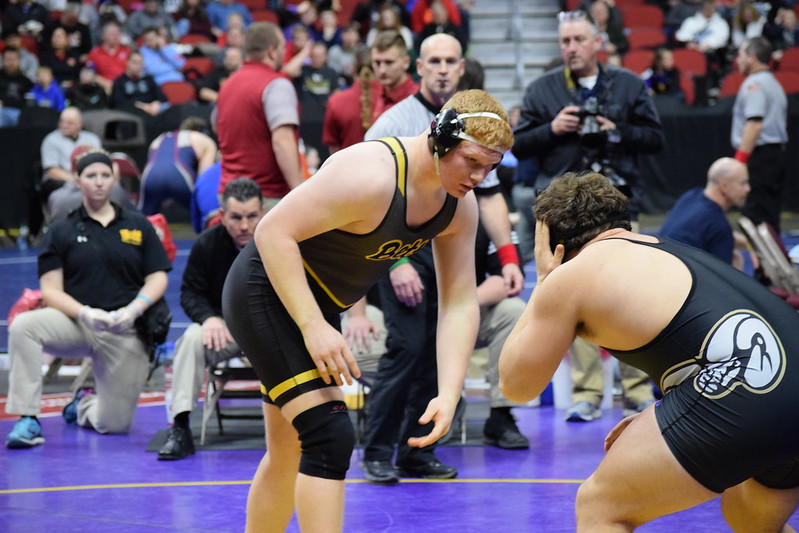 Talented freshman CJ Walrath will be in a district with a pair of returning State Qualifiers. Logan Adamson placed 7th last year as well. None of these guys have wrestled each other this year.

Griffin Liddle is ranked #1 for a reason and should cruise to a District Title. Settles beat Deseh by a 3-1 decision at the J-Hawk Invitational in January. Deseh has been wrestling well since then with his only losses coming to Liddle. Look for this to be a semi-final matchup on Saturday with the winner punching his ticket to state.

Interesting weight class where Cox has beat Stotts and German. Shawhan owns a 1-0 win over German from the first tournament of the year. Stotts has beat German and Shawhan in close matches. This bracket could finish a number of ways with any 2 of the 4 wrestlers placing 1st and 2nd in any order. The semi-finals and placing rounds should be really exciting at this weight in Grimes.

Look for Bonanno to run away with this weight at Districts. However, there are 4 other wrestlers at this weight that all have a legitimate shot at punching their ticket to Wells Fargo Arena. Cahill beat Summers 11-6 and Reed in Overtime 7-5 at the CIML.  Gunn has not wrestled many matched but he has wrestled Bonanno and Vetterick to close matches. There will be an exciting 1st round match, semi-final and I would not be surprised to see a wrestle back happen at this weight.

I look for Runyon to win this weight with relative ease. Wells-Smith was 0-0 after the first period in the dual before Wells locked up a cradle and pinned him. I look for this to be a semi-final match and the winner will find himself wrestling at the State Tournament next week. Don’t sleep on Schwartzman, he can be dangerous and has beaten some quality opponents.

Cowell should win this weight, but don’t be surprised if Walters finds a way to win this weight. He placed 8th last season and has beat some quality opponents throughout his career. Wiemann has had a good season and wrestled hard. He has wins over some quality competition as well. Arnold has not wrestled a ton of 3A competition, but he did pin Plagge from Cedar Falls last night in the regional dual.

Look for Riggins to run away with this weight at Districts. The other 5 guys are all wrestlers who have either been ranked or close to being ranked. Herrmann and Plagge have split this season. Bitker beat Amos 6-2. Amos and Smith both qualified last season. Bitker, Plagge and Herrmann were in a tough district and could not get out last season. There are a lot of moving parts in this bracket. Two of these guys will be wrestling for 5th place on Saturday which is crazy. Look for there to be a wrestle back and some fireworks in the semi-finals and 3rd place match.

This weight is interesting. Bohnenkamp does not have many matches at 195 this season. Walker has not wrestled the other 3 guys in this district, but is an extremely talented freshman with some quality wins. Cook qualified last season and has done nothing but improve all season and put together a 31-7 campaign. Sanger has not wrestled much, but also has some quality wins. I look for Bohnenkamp and Walker to have a battle in the finals.

Braydon Wolf is putting together one of the most dominant season in recent memory and I don’t think that changes this Saturday. Williams has wrestled both Linahon and Thorson. Linahon beat Williams 6-5; Thorson beat Williams 7-2. Linahon is the returning 3rd place finisher and knows what it takes to be successful when it matters most. Thorson qualified for state and won a match last season. Williams has been in a battle with several ranked wrestlers. This weight is going to be fun. We will see a Linahon-Thorson quarter-final. If Williams beats the loser of that match for 3rd then he will likely get a wrestle back to head to the state tournament.

One thought on “Class 3A District Brackets to Watch”