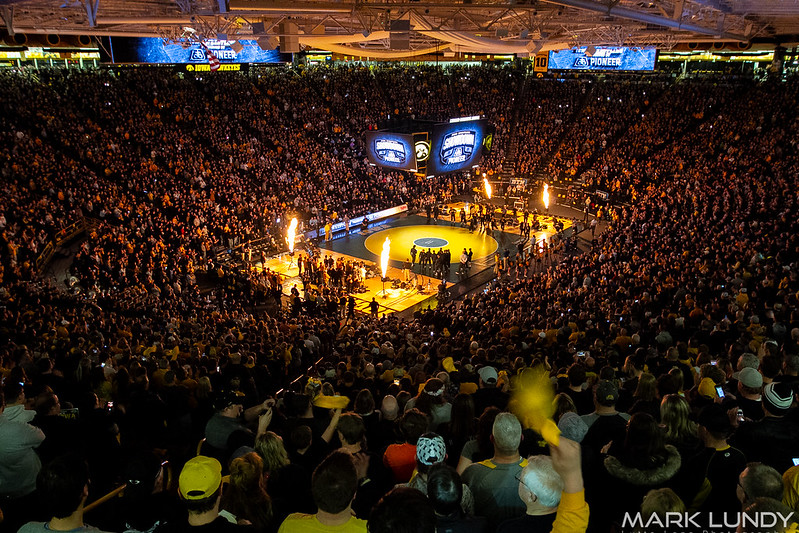 CHICAGO, Ill. – On Jan. 31, No. 1 Iowa vs. No. 2 Penn State became the most-watched wrestling telecast in BTN history as well as the day’s highest-rated college sporting event across all networks. The Big Ten dual averaged 342,955 viewers, according to Nielsen Media Research, which eclipsed the Ohio State vs. Penn State meet in 2018 (309,265 viewers) by +11%.

The Hawkeyes and Nittany Lions broadcast capped a run of three consecutive nights in which BTN featured the highest-rated college sporting event across all television networks. On Wednesday night, Indiana vs. Penn State men’s basketball averaged 325,205 viewers and earned the No. 1 distinction. On Thursday, Iowa vs. Maryland men’s basketball averaged 455,490 viewers en route to the top spot.

BTN’s complete wrestling schedule for this weekend is below (all times ET):

About BTN: A joint venture between the Big Ten Conference and Fox Networks, BTN is the first internationally distributed network dedicated to covering one of the premier collegiate conferences in the country. With more than 1,700 events across all platforms, the 24/7 network is the ultimate destination for Big Ten fans and alumni across the country, allowing them to see their favorite teams, regardless of where they live. The Fox Sports App is the digital extension of the Big Ten Network, delivering live games and on-demand programming to Big Ten Network customers via the web, smartphones, and tablets. Network events include football, men’s and women’s basketball games, dozens of Big Ten Olympic sports and championship events, studio shows and classic games. Original programming highlights activities and accomplishments of some of the nation’s finest universities, including the Emmy-nominated The Journey. The network is in more than 60 million homes across the United States and Canada, including carriage by all the major video distributors, such as DIRECTV, DISH, Verizon FiOS, AT&T U-Verse, Charter Communications, Comcast Xfinity, Altice USA, Cox Communications, Mediacom, RCN, WOW!, and approximately 300 additional video providers across North America. BTN is also available through the majority of OTT providers, including AT&T TV NOW, YouTube TV, Hulu, PlayStation Vue and fuboTV. For additional information, please visit www.btn.com.