UNI Roars Back, Knocks off Missouri 20-13 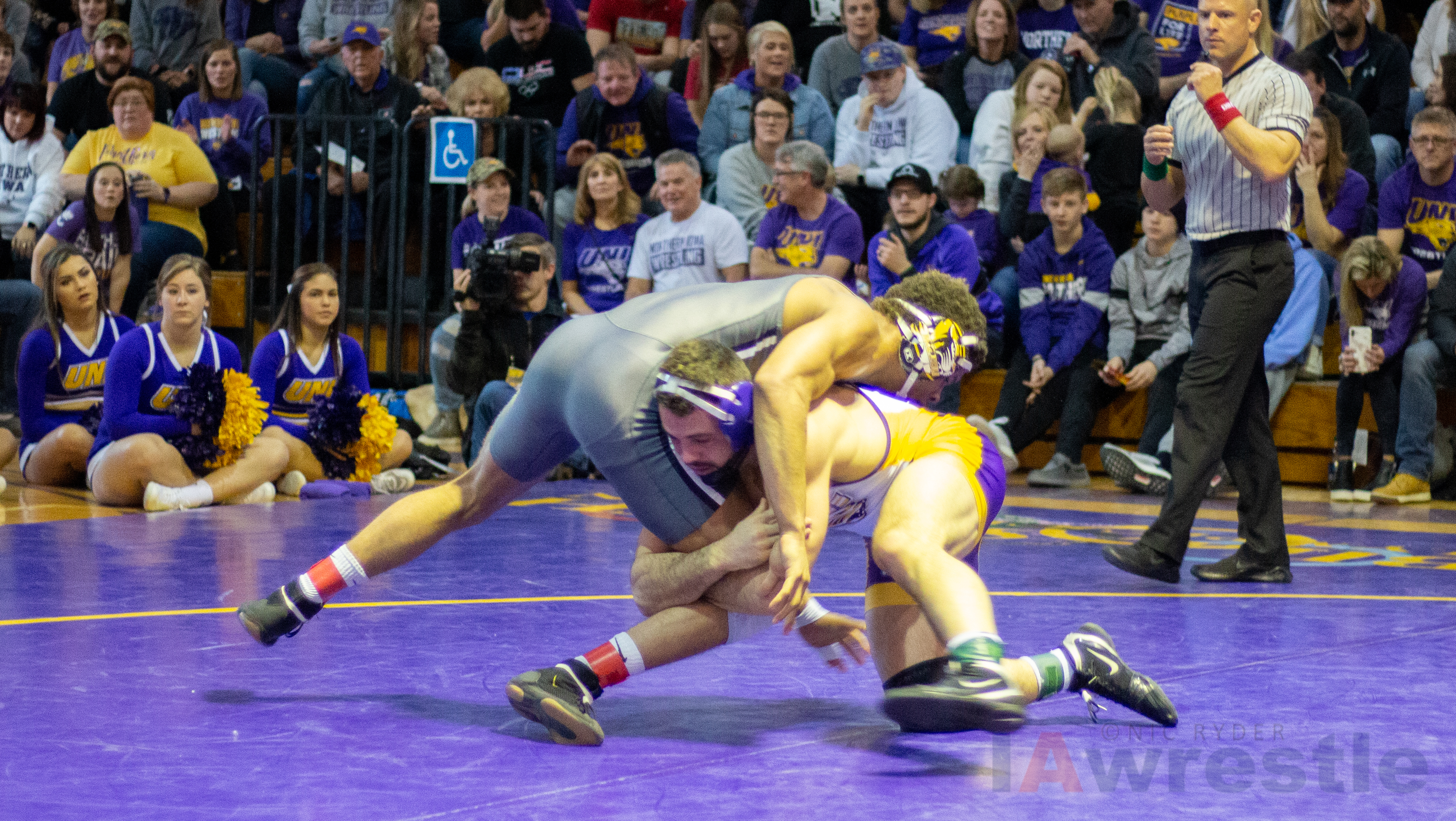 On Friday night, as a couple of reporters were walking out of the West Gym, UNI head coach Doug Schwab thanked us and said, “That’s the great thing about wrestling, we get another chance Sunday.” The Panthers had just finished losing 25-13 to South Dakota State.

Well now its Sunday and Schwab’s squad didn’t let another dual get by.

“It was a good response by our team. A lot of guys gave themselves a lot of opportunities,” Schwab said. “That’s what I want, we rolled really hard, and some of the pace that we set, I think, early in matches paid dividends later in matches.”

The Panthers roared back from a 10-6 intermission deficit to win 20-13 against the Missouri Tigers. With consecutive wins from Austin Yant, Bryce Steiert, and Taylor Lujan UNI led 16-10 with two matches remaining. Heavyweight Carter Isley closed things out with an 11-1 win.

Yant scored his second victory in his last three duals, 4-3 in tiebreaker one, against Peyton Mocco. Yant scored a takedown in the first period and rode Mocco out of the second set of tiebreakers.

“We came out a little flat the other night, but short term memory, that’s the biggest thing. It’s just like a tournament,” Yant said afterwards. “Doug talked a lot about, ‘give me the ball, I want to be the guy, I want it on me.’

“I took that mentality and you know what, I’m gonna go score. And I got a takedown, for once, finally.”

Bryce Steiert kept things rolling with 10-1 major decision over Missouri’s Jeremiah Kent. Kent was a little of a new look for Steiert, as he wanted to go mostly upper body on the senior and rode tough on top, even choosing to go on top to start the second period. The Panther escaped that and took a 3-1 lead into the third period, where he chose to start on bottom.

“Bryce could have easily went both up on [their] feet, you know that guy’s really good on top,” Schwab said. “But man he’s challenging himself on bottom and he doesn’t feel like anyone can ride him.”

“I asked my teammate at the end, ‘what was the score?’ I forgot to look at the end, and I think I majored him,” Steiert said afterwards. “Just continuing to build, it’s like cracking an egg, you know, you just kind of stick with it and see how it ends up.

“Try to win every position.”

Well, Steiert won the battle on bottom, earning a reversal and riding Kent out, racking up four more points along the way (one two-point nearfall and two more stall points).

Taylor Lujan came out and did his thing, after giving up the first takedown of the match. He reversed Dylan Wisman right out of that and it was all Lujan afterwards, racking up five takedowns and only having his knee go completely backwards once.

Lujan was fine though, his knee just does that. He won 13-8.

Jay Schwarm got things started off with a 2-0 win over Dack Punke, earning a takedown off a neutral-danger call in the second period and effectively riding Punke out for the rest of the match. Schwarm drew a stall call on Punke in the third but could not get Punke over the rest of the way.

Michael Blockhus missed out on wrestling #13 Grant Leeth, who’s been in and out of the lineup this season, but took advantage early in his match against Alex Butler, scoring a takedown in the first period and then riding Butler out of the third, not giving up an offensive point.

One of the most exciting matches of the afternoon, but one that didn’t go the Panther’s way was #4 Brock Mauller’s win over #7 Max Thomsen. Going into sudden victory each man scored an escape point with some scrambles that ended up with no points being scored. Thomsen shot in the sudden victory and Mauller was able to scramble out of it and get the winning takedown.

Jack Skudlarczyk came back off an injury from Friday night, but dropped a 14-2 match to Allan Hart. Keaton Geerts was able to keep it close against #12 Jarrett Jacques, but ultimately fell 8-5. UNI’s other loss came at 197 pounds, where Noah Glaser dropped a 6-2 decision to Wyatt Koelling.

UNI is next on the mat this Friday night against Northern Colorado. They’ll visit Air Force to round out their trip out west on Sunday.