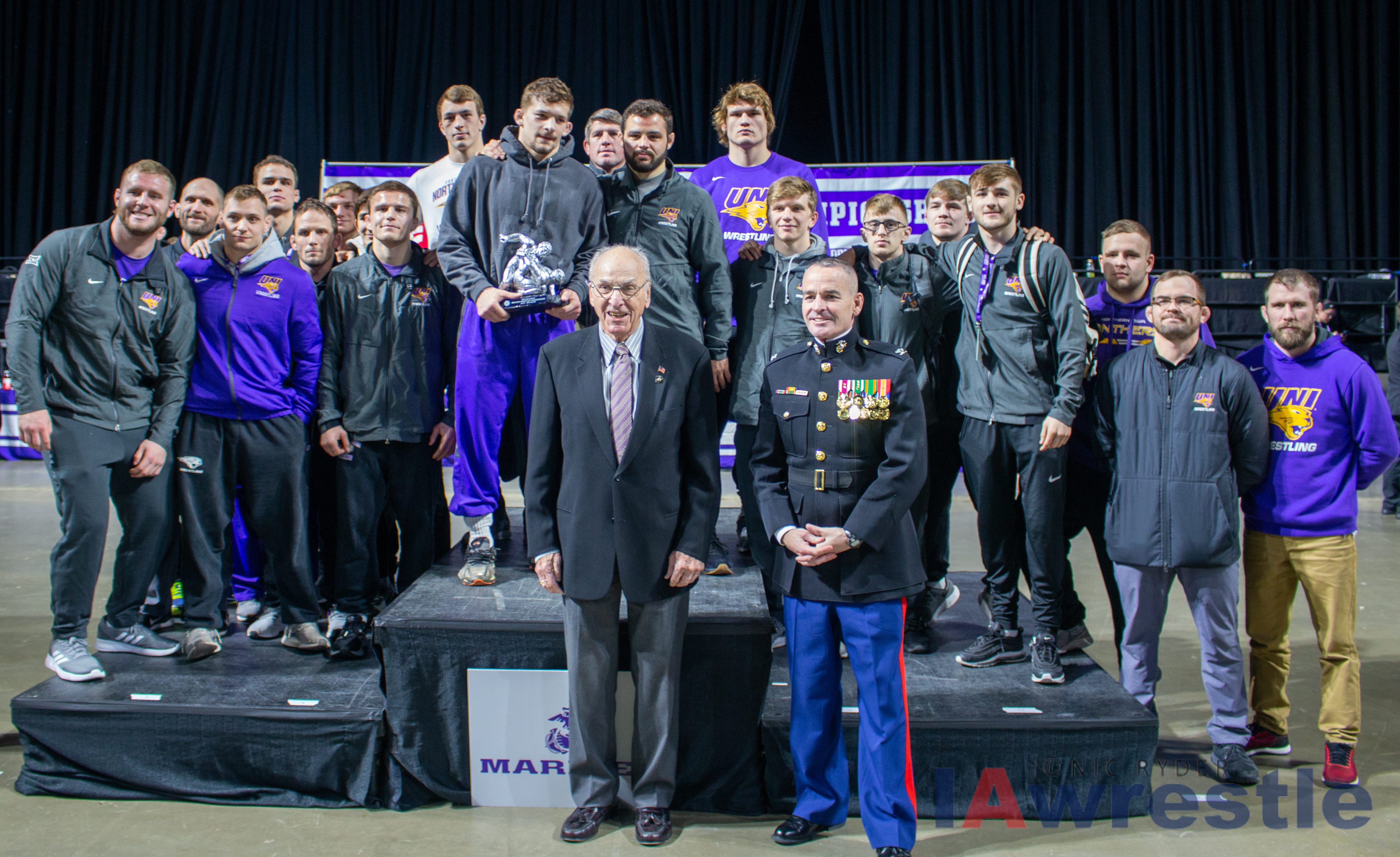 In case you missed Sunday and Monday, the UNI Panthers took home second place from the 57th Midlands Championships. The tournament wasn’t *technically* in Chicago, but Hoffman Estates. Everybody just says Chicago.

I was asked by someone who is a self-described, “novice wrestling mind,” how they should feel about the second place finish on Monday afternoon, before the medal matches. I responded that when I figure out how I feel about it, I’d let him know.

Now it’s two days later and I still don’t really know how I feel about it. Obviously, taking second in any national tournament is very good, and with that tournament having the history and prestige of The Midlands, plus UNI tied it’s highest team finish, seems quite good.

And the smaller school from Cedar Falls was in front of its Big 12 competitors…but only because no other Big 12 school sent their full lineups to the tournament. Fresno Statew as behind UNI in 20th, and Oklahoma was next in the standings in 22nd place.

Comparing against larger Big 10 schools, Illinois, Wisconsin (who wrestles UNI in a dual later this year) Purdue, Northwestern (who UNI lost to this year), Indiana, Minnesota, and Michigan all finished behind the Panthers. The two “M” schools did not send their entire lineups.

But they were 95.5 points behind first-place team Iowa. The Hawkeyes had seven wrestlers in the finals with five champions, one third placer, two fourth placers, and two in sixth. Their 12 place finishes were by far the most of any team, followed by Army and Northwestern with six each.

The Panthers had two men in the final match with Taylor Lujan coming out on top against Iowa’s Abe Assad, who is a true freshman wrestling unattached. Bryce Steiert lost a rematch with Purdue’s Dylan Lydy in his championship match. Steiert lost a sudden victory match against the Boilermaker in the final of the Cliff Keen Las Vegas Invite.

Lujan closed things out on a high note for UNI, but the Panthers had a rough start to the second day of competition; all four wrestlers in the consolation round lost in their first matches, knocking all of them out of the tournament. That costs the team placement points (though it wouldn’t have been near enough to catch Iowa) and did not instill a lot of confidence going forward. So you go from eight men competing to just four in a matter of half an hour.

I have been saying for a while that when Lujan and Steiert, and to a little lesser extent Schwarm, Thomsen and Holschlag (when he’s healthy) are good, UNI can be a really good team – especially in tournaments. Bonus points are big and all five of them can go get them. But as their most recent performance shows that when just a few of these guys are off, or unavailable, the Panther’s prospects go down drastically.

However as I type that, I have to remind myself that UNI still took home second place. They still beat all those other Big Ten schools in a tournament. They still had four place winners and two finalists. Carter Isley took down the number one ranked heavyweight twice and made it look easy. Schwarm can pin anybody, anywhere, anytime. Lujan’s knee doesn’t do what normal human knees do and can wrestle with anybody in the country. Steiert is solid from every position, as is Thomsen. The Panthers are good this season.

Yes there are holes at 157, 165, and 197 for as long as Holschlag is out. Yes there were disappointing performances in Chicago. And yes their dual record might not be as good as it might otherwise be.

I hesitate to tell people how to feel about their respective teams, because people are generally smart enough to make those determinations on their own, but lets hope that Panther fans enjoy these final runs by their seniors, and lets hope that those seniors go all out and put on a show for fans.

The top of this UNI team is good. Midlands was a good performance, and fans should be excited about what this team can do the rest of the year and in March.