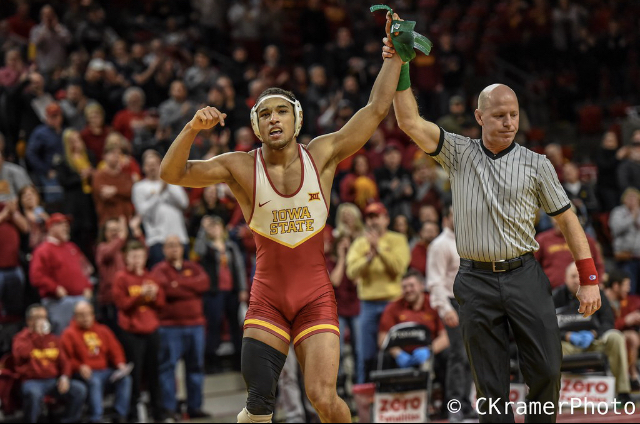 How It Happened
Alex Mackall put the Cyclones on the board to open the dual with a 10-3 victory over Brandon Siedman. Mackall tallied four takedowns, including three in the first period, to improve his season record to 4-0.

Iowa State separated themselves from the Bison when the Cardinal and Gold won three straight matches from 141-157, two that were of bonus-point variety. Ian Parker spurred the Cyclone run with a 6-2 decision over Noah Levett. Parker racked up over three minutes of riding time in his 2019-20 season opener.

At 149 pounds, Degen secured three third-period takedowns to distance himself from Matthew Kolonia. Degen gave up the first takedown of the match, but didn’t surrender another in his 15-5 major decision over Kolonia.

In what was a highly anticipated collegiate debut, Carr did not disappoint. The Junior World Champion jumped out to an 8-0 lead against Jaden Fisher in the first period with a takedown and a pair of turns. Carr showed that his freestyle prowess translated to folkstyle wrestling, turning Fisher a number of times and garnering nearly five minutes of riding time in an 18-3 technical fall victory.

At 174 pounds, Coleman provided the highlight of the night for the Cyclones. Leading 3-0 in the second period, Coleman went to work on top after a takedown. Bucknell’s Frankie Guida tried to roll through, but Coleman countered and pinned the Bison in 4:59.

Sam Colbray iced the Cyclone victory away with a workmanlike 7-3 decision over Brandon Stokes. Colbray scored on two takedowns and did well on top, riding Stokes for 1:59 of the match.

Next Up
Iowa State will turn around and host Iowa next Sunday in the Iowa Corn Cy-Hawk Dual. The Cyclones and Hawkeyes are set to wrestle at 2 p.m. in Hilton Coliseum. That dual will be available through Cyclones.tv and FloWrestling.

One thought on “Iowa State handles Bucknell in opener”