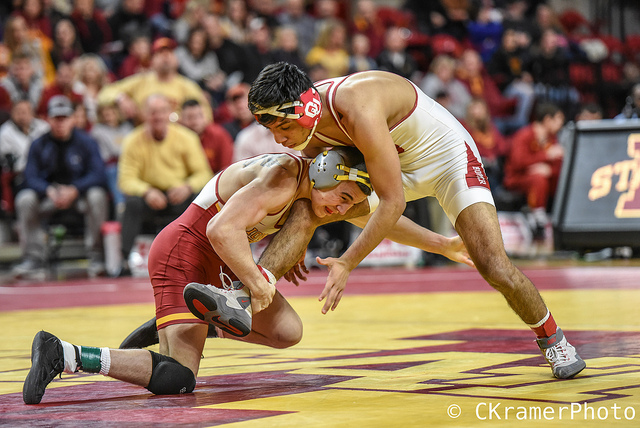 Iowa State comes into their dual against Oregon State having done something they hadn’t since the ‘72-‘73 season. Shutout conference opponents in back to back duals. Oh…and then there’s the one hundred points put on the board in doing so.

Scoffers will say, neither team they wrestled last weekend was very good. True, but one of the biggest differences this year is that the Cyclones are beating lesser opponents by big margins. Let’s get real, a far cry better than two years ago.

When asked about Alex Mackall’s progress this year Coach Dresser had this to say, “He’s pretty good on top isn’t he? I like the way he trains, his focus, his detail. He’s a professional in the way he approaches the sport.” He also added, “This is what makes you famous in college wrestling. Going out and beating the good guys; you don’t get famous beating the average guys. He’s gonna get a chance to get more famous here in the next month.”

While Austin Gomez didn’t get a match last Sunday; he did get in on the eight falls recorded by Iowa State last weekend. On Friday night he earned the fall over Rylee Molitor of SDSU in the second period.

No. 8 Ian Parker is a Perfect 10-0 in duals this year. He’s also averaging 10.8 points per match in those duals. I don’t look for his first blemish to come against Grant Willits Monday night.

Getting comfortable in uncomfortable is exactly what Jarrett Degen has done. This will come in handy down the home stretch. Giving up the first takedown has been commonplace as of late. Although against Utah Valley  this wasn’t the case, getting a fall in the first period after securing the only takedown of the match.

At this point we should all hope Chase Straw leads the dual off for Iowa State. Each of the last three duals have started at 157 pounds. In those duals, Chase has outscored his opponents 27-10. Worth noting, Hunter Willits injury defaulted out of his match on January 31st at the 3:59 mark. Oregon State’s last dual on February 2nd they forfeited at 157.

It’ll be a game time decision on who gets the nod at 165 pounds Monday night. Either Logan Schumacher, or Zane Mulder will fill the spot vacated due to injury. Remember it’s been stated that it is Logan’s spot once healthy enough.

So many great storylines this year for Cyclone wrestling. Marcus Coleman has got to be one of them. Local Ames High graduate, now in the top twenty in the country, in his first year in the Iowa State lineup. Arguably, the biggest ovation in Hilton so far this season was his comeback win against Oklahoma.

With only one dual loss coming into Monday night is Sammy Colbray. He brings twenty eight takedowns, and eight bonus point wins with him when he faces Bob Coleman Monday night.

Looking to add to his six match win streak is, Willie Miklus. The three time All-American seems to be gaining momentum heading into the postseason. Cyclone fans are chomping at the bit for a potential rematch with Josh Hokit at the Big 12’s, but first we’ve got a couple more duals to go. Starting with a matchup with Jamarcus Grant Monday night.

Gannon Gremmel is another Cyclone wrestler aiming to be more famous. Like Mackall, he’ll get his chance against Oregon State when his opposition will be No. 3 Amar Dhesi. Gannon already has wins over last years Big 12 runner-up AJ Nevills, and No. 12 Tate Orndorff. The latter of which was by fall.