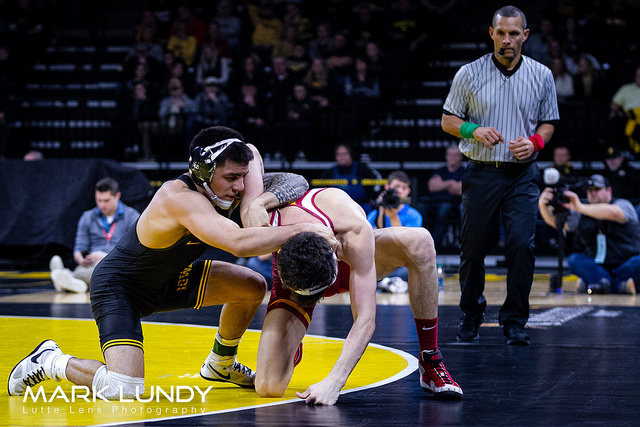 MINNEAPOLIS — The fourth-ranked University of Iowa wrestling team defended the Governor’s Border Belt on Sunday at Minnesota, defeating the eighth-ranked Gophers, 24-10, at a sold out Maturi Pavilion.

Iowa won seven-of-10 matches, held a 17-8 edge on takedowns, and defeated three top 10 wrestlers to extend its winning streak over Minnesota to five.

“We have guys that want to wrestle and we have guys that get ready to wrestle,” said Iowa head coach Tom Brands. “We came into Minneapolis and the University of Minnesota… they geared up for it, our guys get up for it. Good things happen when you get ready.”

The 5,238 in attendance saw Iowa win four of five matches prior to intermission. Fifth-ranked Kaleb Young led things off with a 7-1 win at 157. The match was tied 1-1 before Young threw No. 9 Steve Bleise to his back with 10 seconds left in the third.

“I was hand fighting. He went to a shot, came up to a body lock, not exactly a position I want to be in, but nothing that I haven’t been in before,” Young said. “He came up tight, I stepped my hips out in front and let it fly.”

Marinelli extended Iowa’s lead to 9-0, registering his fifth pin of the season. He led 8-1 before securing a fall in 5:55.

“During the week Tom told me, we need bonus points. That’s all I needed to know. We needed it and I got the pin,” Marinelli said. “I had to get him in the middle of the mat with my pinning combinations. Terry said when I secure that and stick to the base hits first, that stuff will come.”

Mitch Bowman nearly kept Iowa perfect through three bouts, but he ran out of time against No. 11 Devin Skatzka at 174. Trailing 7-1, Bowman scored a reversal and three takedowns in the final two-plus minutes, and was in on a shot when time expired on an 11-9 defeat.

Cash Wilcke and Jacob Warner won by decision at 184 and 197, respectively, giving Iowa a 15-3 lead at the break.

Iowa responded with consecutive top 10 wins from Spencer Lee and Austin DeSanto at 125 and 133, respectively.

The Gophers got a win at 141, where No. 6 Mitch McKee won 5-3 against No. 15 Max Murin, but Iowa finished the dual back on top at 149. Twelfth-ranked Pat Lugo used two takedowns and two sets of back points to win by major decision, 14-0, against No. 20 Tommy Thorn.
“We showed some things with where we’re headed. There are things in this lineup that are not going our way necessarily, but where we’re headed with this team, that path that we’re on, we’re going in the right direction,” Brands said. “We have Rutgers coming up, that’s what we have to look to and then we go from there.”

NOTABLES
•Iowa has won five straight in the series and owns a 13-5 advantage battling for the Governor’s Border Belt.
•Iowa has won three straight at Minnesota.
•Kaleb Young defeated the first top 10 opponent of his career.
•Marinelli recorded his fifth fall of the season, matching his total from last year. He improved to 12-0.
•Jacob Warner won his Big Ten debut.
•Spencer Lee won for the 11th time in 14 career matches against top 10 opponents.
•Austin DeSanto earned his first win over a top 10 opponent and improved to 3-1 against ranked opponents.
•Iowa head coach Tom Brands improved to 13-5 against the Gophers.

One thought on “Hawkeyes Silence Gophers, 24-10”