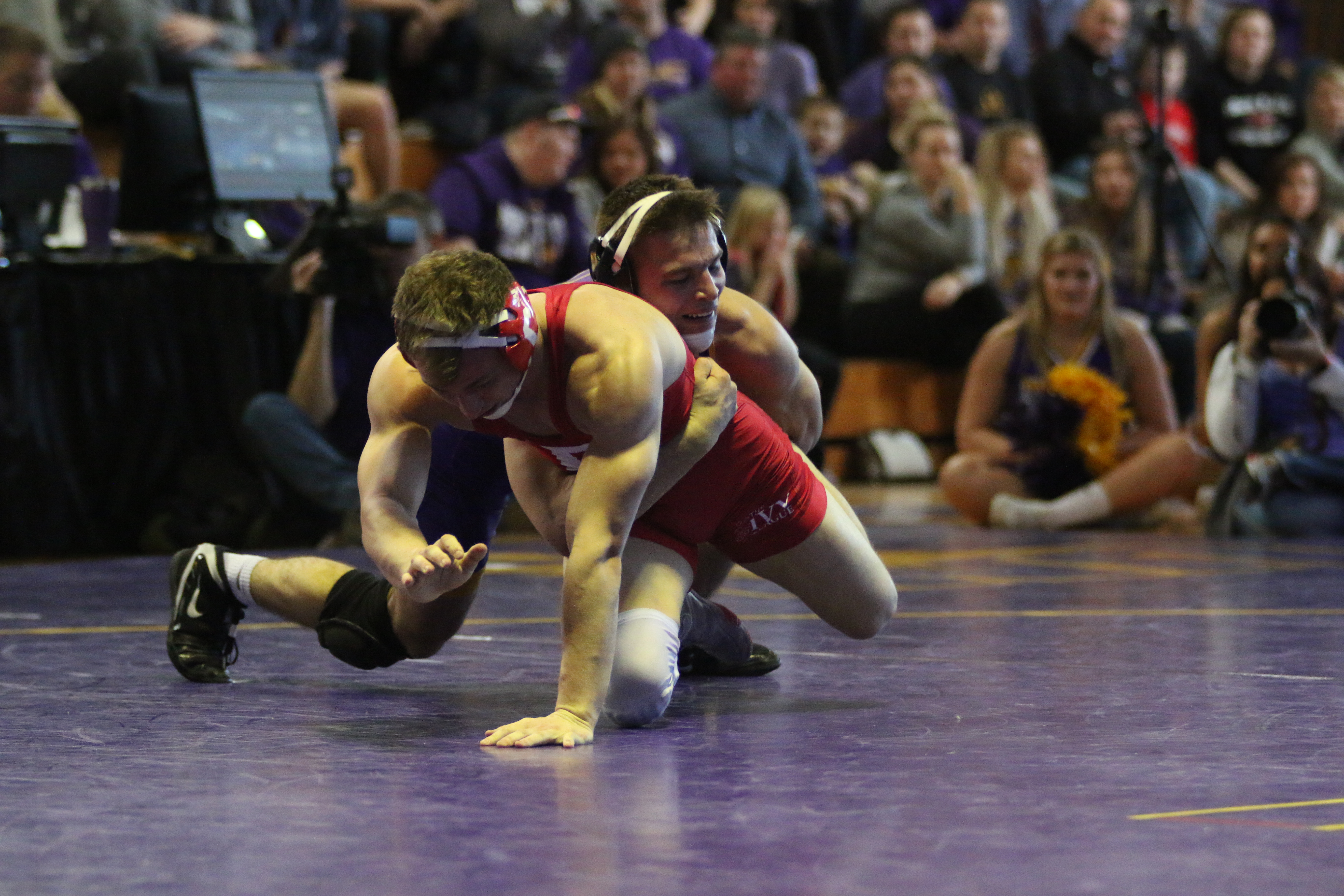 In their 2018-19 home opener the UNI Panthers dropped a dual with the Corenll Big Red 21-14. The 11-time defending EIWA Champions came into the West Gym in Cedar Falls and just outlasted Northern Iowa.

UNI won three of the first five matches and carried a 11-7 lead going into intermission. They were only able to capitalize once in the second half, a 3-2 win by Tyrell Gordon.

Gordon made his UNI debut against Cornell’s Jake Taylor. The two traded escapes going into the third, when Gordon was able to score a takedown off a poor attempt by Taylor.

“I thought that guy was really slippery,” Gordon said. The Panther was able to fend off Taylor for the remainder of the period to come away with the win.

The dual started with Cornell’s defending national champion Yianni Diakomihalis wrestled in his first dual of the season, taking down UNI’s #7 Josh Alber 12-2. Diakomihalis controlled most of the match, putting himself in great positions to reattack after Alber fended off a first try.

“Considering it’s his first time back, first time down to weight, first time one-hour weigh in, and we drew 141, which I was like, ‘Oh my goodness,’ I was worried about that,” Cornell Head Coach Rob Koll said. “I was thrilled with how he wrestled.”

Max Thomsen got the Panthers right back in the dual though with a 14-4 major decision over Hunter Richard. Thomsen scored early and often, and his shoulder looked healthy after defaulting out of the UNI open last weekend.

Taylor Lujan looked great in his dual debut, taking down #16 Brandon Womack for the third time this season. Lujan gave up the first takedown of the match but used a strong third period to come all the way back and get the Panthers much-needed bonus points.

#11 Max Dean took a match from #6 Drew Foster at 184 pounds. Foster led 4-2 after the first period but gave up three points in the second to trail 5-4 going to the third. Dean did a great job of riding in the third, not letting Foster out until there were under 7 seconds left in the period and earning riding time for the deciding point. Dean won 6-5.

Carter Isley was out for the Panthers, having injured his knee last Saturday at the UNI Open. Izaak Shedenhelm took the mat at heavyweight (and probably gave up at least 30 pounds) against Jeramy Sweany. Sweany was just too big for Shedenhelm and dropped the match 6-2.

Vitali Arujau and Chas Tucker closed out the dual with wins for the Big Red at 125 and 133 pounds, respectively. Arujau won 17-7 over Jay Schwarm and Tucker won 12-2 over Jack Skudlarczyk.

The Panthers are next in action at The Midlands, December 29th and 30th.