Clark wins anticipated battle with Ramos at AWL I 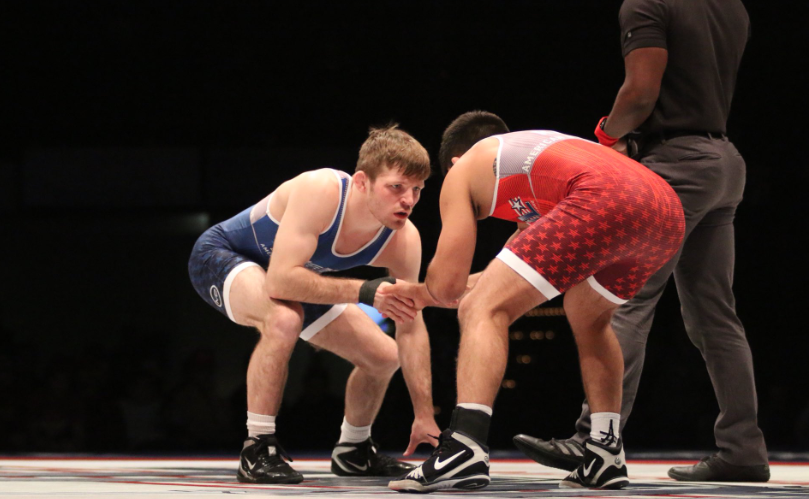 The dual was led by a plethora of well credentialed freestyle wrestlers on the Senior level. Team Taylor ran away with the team score, but despite one team running away with the dual, the individual matches provided entertainment all through the lineup with the night highlighted by the final two bouts.

The dual started at 70 kg with hometown wrestler Brandon Sorensen taking on James Green. The multi-time World medalist was able to strike first in the bout securing a takedown midway through the first period. He continued to build on that lead scoring two more takedowns in the first to lead 6-0 at the end of the first. Green closed things out early with two second period takedowns to deliver Team Dake its first win of the night.

Making his return to the Hawkeye state was former Iowa Central star Richie Lewis taking on Tommy Gantt at 74 kg. It was former U23 World Champion Lewis that controlled the first period picking up a takedown on the edge of the mat to control at 2-0 lead. The second half of the match was a different story as Gantt’s pace proved to be too much as he poured on seven straight points in the period to take the match 7-2.

Team Taylor brought home their second straight match to take over the team lead at 79 kg when Taylor’s top selection Alex Dieringer took out Isaiah Martinez by a score of 4-2. Dieringer picked up takedowns in the first and second periods for his winning scores.

The hometown crowd showed strong support for their own Sam Brooks in his 86 kg bout with Nick Heflin. The first period went to Heflin as he scored a takedown and was able to tie up Brooks’ ankle for a leg lace for two more points. But the second period was all Brooks. He started his comeback with a big throw on the edge of the mat, and followed that with a pushout, takedown and turn to takeover the lead. Brooks continued to pour on the points for the final score of 11-4 in front of his crowd.

Extending Team Taylor’s run of dominance was Mike Macchiavello, who picked up a 8-0 victory over Deron Winn in the 92 kg. At the end of the bout Winn removed his wrestling shoes and left them on the mat, signalling the end of his career on the wrestling mat.

In the 97 kg bout another local product was featured as Kyven Gadson looked to defend his home territory against Jacob Kasper. Gadson was able to strike first in the match with a takedown which is a lead he never surrendered. That’s not to say that Kasper didn’t push the former NCAA champion, as the Duke standout managed to make things interesting in the second.

Team Dake returned to the win column late in the dual as Dom Bradley secured a tight 3-1 victory over Zach Rey in the 125 kg match. Bradley scored a point in the first and two points in the second to claim a victory for his team.

From there the dual flipped back over the lightweights where Frank Perrelli and Nico Megaludis put on a show at 57 kg. Megaludis managed to come out on top of the meeting 7-2, but until a late match score it was anyone’s match. Both wrestlers provided the crowd with plenty of action and scrambles.

It wasn’t all that long ago that Tony Ramos was the fan favorite of the U.S. Cellular Center, but his reception inside the arena was much different as he was greeted by some boos. Despite winning a big match the last time he was in this arena, this time it was all Clark as he dominated an 8-0 victory over his former teammate at 61 kg.

The match’s first point was scored when Ramos failed to score on the shot clock and that was all that would go on the scoreboard in the first period. It was in the second that Clark really found his offense getting a takedown and turn to pull away from Ramos. Clark finished it off with another takedown and pushout for the final.

In the night’s final bout there is no denying that both Jordan Oliver and Zain Retherford put on a display, putting up 12 points in the first period. Oliver struck first with a pushout, followed by Retherford rattling off three straight points to take a 3-1 lead. Oliver then staged a comeback of his own, highlighted by a five point throw that put him up 9-3 halfway through the match.

Retherford was down eight points in the final period and stage a comeback full of pushouts, a takedown, and a late exposure, but in the end Oliver came away with a 13-11 win.