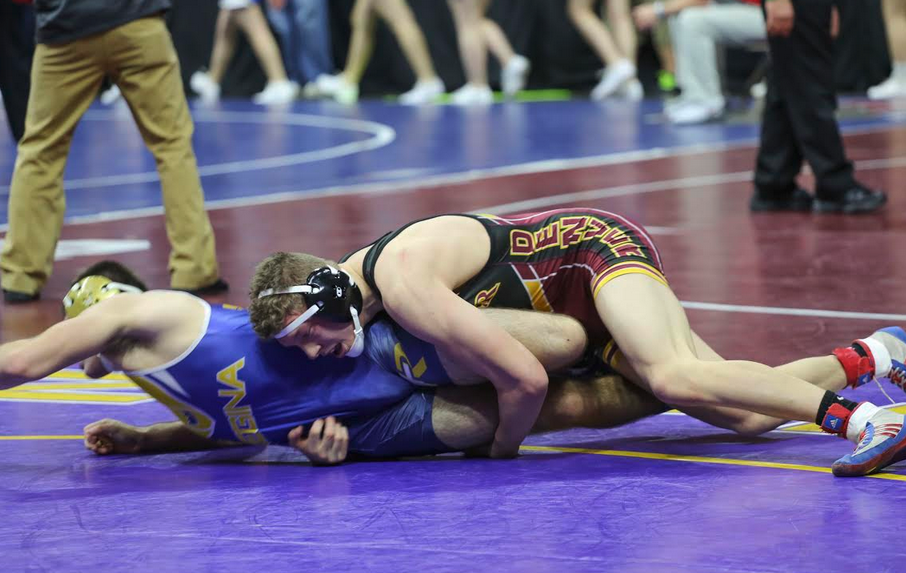 Two time state place winner Cael Krueger of Denver has committed to Coe College and coach Jon Oostendorp. After being forced to miss the postseason his freshman year due to injury Krueger has made the award stand twice. He finished fifth in class 2A at 152 pounds as Sophomore and fourth in class 1A at 170 pounds as a Junior. Krueger enters his senior season with a career record of 128-12.
Krueger has also had an outstanding off-season following up an Adidas Nationals Title with a Preseason Nationals All-American finish knocking of Oklahoma State Champion Cade Cook along the way.
“I had contact from teams from all levels but whether i wrestled D1, D2, D3, or NAIA wasn’t a priority to me.” Krueger told IAwrestle “I’ve had some really good scraps with a lot of the guys signing D1, but finding the coaches that I most wanted to compete for was my top priority.  I think the Denver staff does the best job of getting the most out of their guys and I feel that same energy with Coach Oostendorp, Gotto, and Henderson.”
“Wrestling is a huge part of my families life so being close to home where they could follow my career, was a big factor. After quite a few visits it was clear to me Coe College and Grand View University were two places I felt i could be the most successful as a student-athlete. Both put together amazing packages for me, and I kind of went back and forth, but Coe just felt like home.  I can’t wait to get to work on winning a National Title anywhere from 165-184lbs with Coach O in my corner.”
Krueger added that “Goal one is to go win a high school state team and individual title at either 160 or 170lbs.”
Krueger is the first known commitment for Coe College in the 2019 recruiting class.