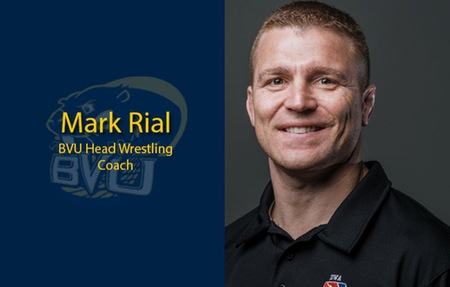 Buena Vista University (BVU) Director of Athletics, Jack Denholm, has announced the hiring of Mark Rial, as the University’s next head wrestling coach, pending the completion of a standard background check.

Rial has been employed by Royal Flooring in Urbandale, Iowa, since 2017 where he works with builders and home owners on new construction and retail projects from start to finish.  In addition to those duties, he has remained closely involved with the sport of wrestling and is gearing up to take the U.S. Greco-Roman Cadet Team to Zagreb, Croatia in July after being named as a co-coach of the team earlier this year.  He was named the Iowa USA Person of the Year in 2017.

“I’m very excited to become the next head wrestling coach at Buena Vista University,” says Rial.  “I met a lot of great people during my time on campus for the interview process which makes it even more exciting.  There are a lot of great things going on both on campus and within the wrestling program that makes it an attractive place to be.  I feel very motivated to lead and to carry on the tradition of BVU wrestling, and with such passionate alumni here, it makes it even more exciting.”

From 2010-17, Rial was an assistant coach at Iowa Central Community College in Fort Dodge where he was also heavily involved with recruiting.  During his tenure with the Tritons program, he was part of a pair of NJCAA National Championship finishes.

Prior to joining the ICCC staff, he served as the wrestling strength and conditioning coach at the University of Northern Iowa from 2008-10, where he assisted with the development and goals of Division I athletes.

Rial was a three-time letter winner and a co-captain in wrestling at UNI where he became an NCAA qualifier as a senior in 2001.  Following graduation, he was part of USA Wrestling from 2002-08 and he went on to become a national champion in 2008.  He was a five-time National Greco Roman All-American and a three-time University Nationals All-American.  He placed sixth at the Olympic Trials in 2004.

“We are thrilled to announce Mark Rial as the new head wrestling coach at Buena Vista University,” says Denholm.  “His wrestling background is very impressive and he is motivated to create a successful program here.  All of his valuable experience and leadership skills will give him the tools to make an impact.”

A native of Fort Dodge, Rial was a two-time state champion for the Dodgers.  He was a four-time state qualifier and a three-time state finalist, earning individual titles in both 1994 and 1996 while finishing as a runner-up in 1995.  He also earned both the Henry W. Schultz and Kevin Lind Scholarship awards.

“The sport of wrestling is a demanding one, but not to be lost is also the demand of being a student-athlete,” adds Rial.  “It takes some adjusting to find that balance, but I’m ready to get here, work extremely hard and show lots of passion for the program and to get it back to the high level.  There is so much upside in place and I’m looking forward to the challenge and am extremely confident we can get there.”

Rial has also volunteered some of his free time serving as a referee and timekeeper at several youth wrestling tournaments over the years and also serving as a guest speaker on both sports and athletics at various local elementary and high schools.

Rial graduated from UNI with a Bachelor of Arts degree in general studies in 2001.