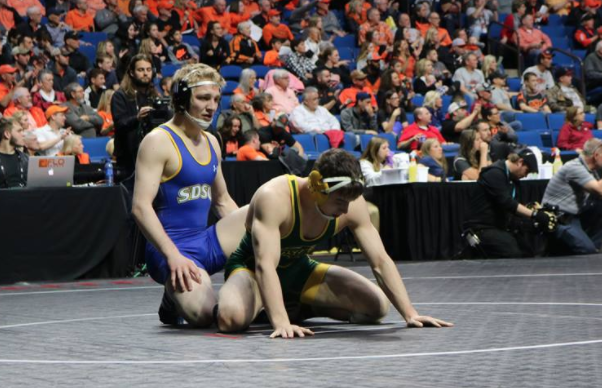 The NCAA released the 47 at large selections for the national tournament next weekend in Cleveland.

Just about the only Iowa connection that received an at-large selection was Henry Pohlmeyer. Pohlmeyer graduated from Johnston and currently wrestles for South Dakota State. He reached the 3rd place match against UNI’s Josh Alber at 141 pounds this past weekend in Tulsa, Oklahoma, for the Big 12 Tournament but fell 5-3.

Iowa, Iowa State, and UNI all did not receive any at-large selections.

INDIANAPOLIS — The NCAA announced the 47 at-large selections for the 2018 NCAA Division I Wrestling Championships on Tuesday.

The wrestlers, listed in alphabetical order by weight class, join the 283 student-athletes that qualified automatically through their conference tournament finishes over the past two weekends. The at-large selections were made by the NCAA Division I Wrestling Committee using the following selection criteria: head-to-head competition, quality wins, results against common opponents, winning percentage, rating percentage index, coaches ranking and qualifying event placement.

Wrestling fans can buy and sell official tickets through the NCAA Ticket Exchange™. This gives ticket holders who are unable to attend a session a place to safely sell their tickets. Buyers can also get their tickets knowing the tickets are authentic and guaranteed, visit here for more information.

Check back here at 6 p.m. Wednesday for the NCAA Division I Wrestling Championship selection show and brackets.