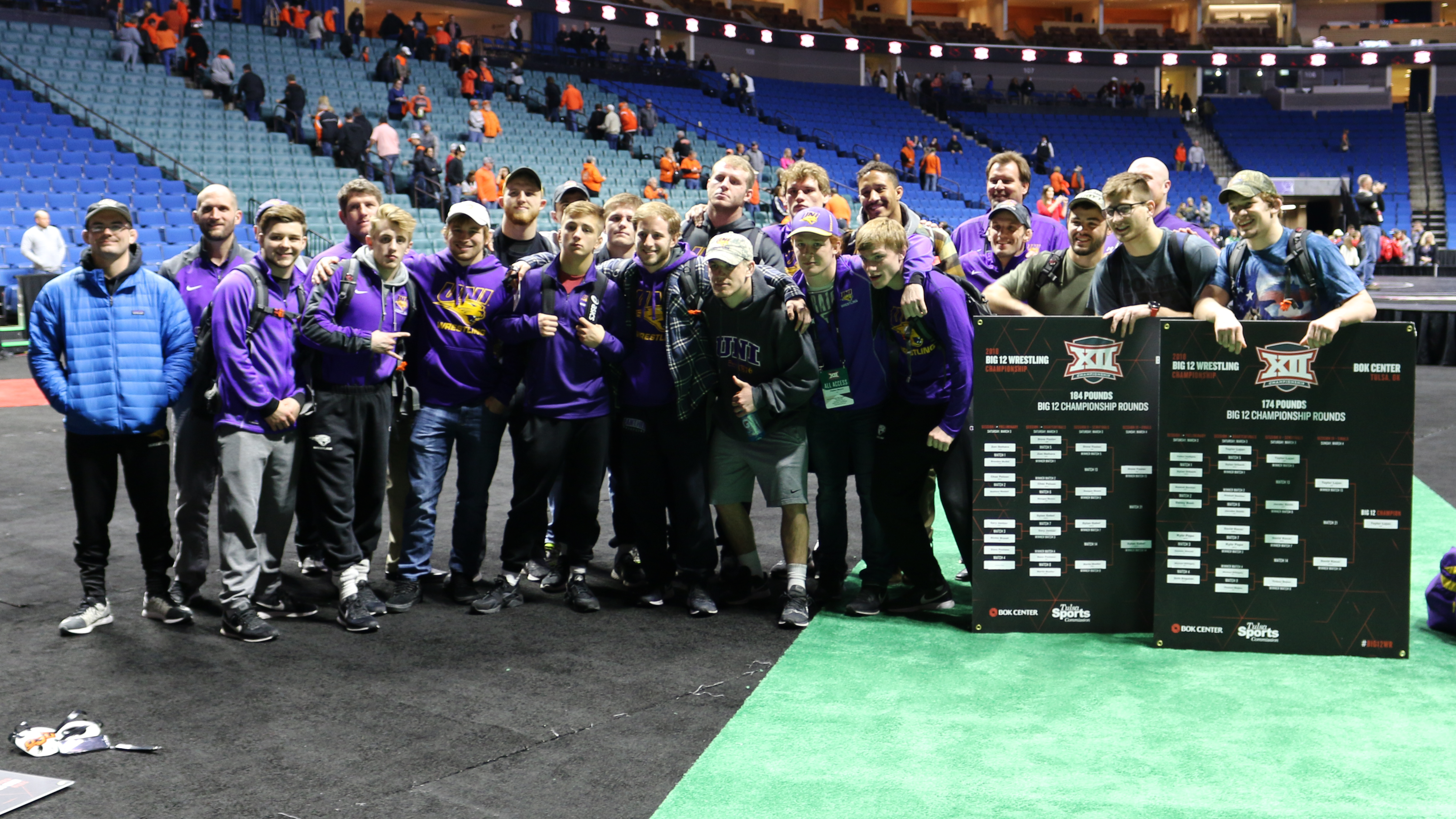 I don’t know if anybody remembers this song, but Two out of Three Ain’t Bad.

That’s not so bad, and even Doug Schwab admitted to some good things.

“Good event, we got to raise the level of our wrestling,” he said after the tournament. “There were a lot of good matches, a lot of high level matches, that’s what we want. So when we get to the national tournament it’s not really a surprise.

Glad we came to the Big 12’s and looking forward to the many years to come. But everything really turns towards nationals now.”

“He did a good job, he got on top and rode him out the rest of the first period,” Schwab said. He went and got to some attacks, he really kept good composure.”

“I’m real comfortable when guys are on my legs, maybe a little too comfortable,” Lujan said afterwards. “I wish I would have shot more, but it is what it is.”

Lujan gave up the first points of the match against South Dakota State’s David Kocer when he was called for a neutral nearfall, giving up two. But he got a takedown and rideout, so things were even again to start the second. He scored another takedown in the third to salt away a 6-3 victory.

Drew Foster came right on Lujan’s heels in the 184 pound match, scoring a 5-1 win over Northern Colorado’s Dylan Gabel. Foster struck first with a takedown and rideout and never looked back.

UNI’s lone blemish in the finals was their first opportunity. 149 pounder Max Thomsen came up short in a rematch against Oklahoma State’s Boo Lewallen. Thomsen won their dual meet match a few weeks ago 3-1 in sudden victory, but was unable to get to many attacks Sunday night.

“He beat us up on collar tie. They really made sure to keep his left hand very active,” Schwab said of Thomsen’s match. “We’ve got to be able to make a match adjustment, and be able to recognize some of that sooner.”

Overall UNI had a good tournament, they pushed through six men total to the NCAA championships in Cleveland, and outpaced everybody not named Oklahoma State in the team standings. Oklahoma State scored 137 to set the pace, UNI had 96.5, SDSU came up third with 94, and Wyoming rounded out the top four with 82.5 points.

The Panthers had a pretty good session III Sunday afternoon, getting three men through to the NCAA Championships in two weeks.

They were led by 141 pounder Josh Alber, who took home 3rd. Alber defeated Iowa State’s Ian Parker in the consolation semifinal, 3-2, and then beat Henry Pohlmeyer from South Dakota State 5-3 to qualify for the NCAA tournament.

UNI had a pair of 4th place finishers in Jay Schwarm at 125 pounds and Jacob Holschlag at 197. Schwarm avenged a pair of losses to Oklahoma’s Christian Moody, knocking him off in a 10-8 match. Schwarm would lose to Utah Valley’s Taylor LaMont 6-4 in the third place match. This will be Schwarms first year qualifying for the NCAA tournament.

Holschlag won his consolation semifinal 1-0 over Fresno State’s Josh Hokit. He would lose again to Preston Weigel in the third place match, 8-4, despite some good scrambles.

Carter Isley dropped both his matches this afternoon, earning 6th place. He lost 8-4 to Dustin Dennison in the consolation semifinal and by fall in TB1 to North Dakota State’s Dan Stibral.

Now it’s on to the NCAA tournament in Cleveland in two weeks. But first we’ll have a little event called War at West Gym, where we’ll put some of the best high school wrestlers in the home of the Panthers next Saturday night. Come out and see all the action before heading east.