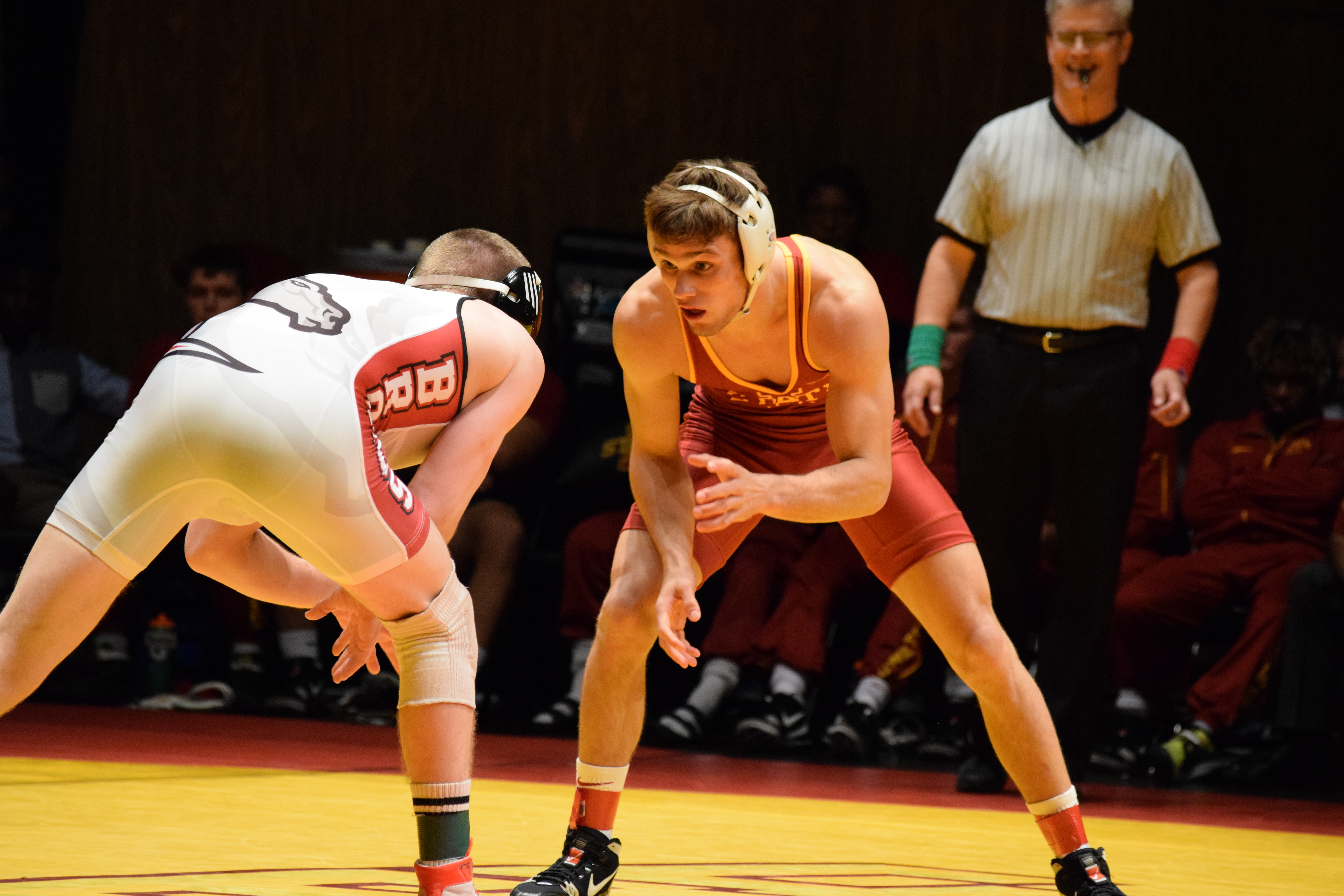 Iowa State returns to the mat this weekend in Las Vegas where they will compete at the Cliff Keen Invitational. This tournament has quickly grown into one of the premiere in season competitions, and it just might be the best field in terms of ranked wrestlers and teams compared to the Midlands and Southern Scuffle.

The tournament will feature over 100 ranked wrestlers across the ten weight classes, with three of those competing for Iowa State. That ranked trio consisting of redshirt freshmen #20 Ian Parker (133), #17 Kanen Storr (141), and #18 Jarrett Degen (149) has brought excitement to the Iowa State faithful who began the season only truly feeling comfortable about Storr. The emergence of Parker and Degen has helped solidify Iowa State’s lightweights to give them a nice core from 133 to 149 pounds.

We’ll start our preview with that ranked trio. Of those three it looks as though Ian Parker will have the easiest path with “only” seven ranked wrestlers competing at his weight, the lowest among any weight-class. The top two at this weight look to be #2 Stevan Micic (Michigan) and #5 Jack Mueller (Virginia).

After that the next “easier” weight would be Degen at 149, which has nine ranked wrestlers. Half of the top ten will be in mix this weekend, which will finally give us our measuring stick on where Degen stacks up. The top contender will be UNI’s Max Thomsen, but after that the top end talent takes a bit of a dip. Both #5 Colton McCrystal and #11 Ke-Shawn Hayes are looking to establish themselves after coming up from 141 pounds from a year ago. Degen’s former teammate Solomon Chishko is off to a rough start in 2017, losing two upset matches and every single win coming by a narrow two point margin or less. This is a weight that is primed for Degen to breakthrough at this weekend.

Last of the trio is Storr who comes into a bracket with 12 ranked wrestlers with the big names being #3 Bryce Meredith (Wyoming), #6 Chad Red (Nebraska), and #7 Tommy Thorn (Minnesota). Last weekend Storr rebounded with an 11-6 win over Tyson Dippery (Rider) after taking two upset losses at the Joe Parasi – Lindenwood Open the week prior. This bracket has the potential for Storr to get a rematch against one of those upsets in  #16 16 Michael Longo (Oklahoma).

The rest of the Iowa State lineup still has a lot of proving to do, but there are still a couple medal threats expected to be in action. At 157 pounds Chase Straw is the only returning medalist out of four wrestlers from last year’s team (Markus Simmons is behind Parker at 133 on the depth chart, and the other two graduated). His eighth place finish a year ago was definitely a surprise and we will see if Straw is able to recapture some of that magic in a bracket with 13 ranked wrestlers.

Heavyweight is the third and final weight-class that has less than 10 ranked wrestlers, which will provide an excellent opportunity for junior Marcus Harrington to make a name for himself. We could also see Harrington meet up with Drexel’s #19 Joey Goodhart, who didn’t travel to Ames when the two teams meet earlier this month.

Looking to keep pace with his fellow redshirt freshmen will be Sammy Colbray at 197 pounds. The highest rated recruit among his peers in 2016, Colbray will try his luck in a field with 11 ranked wrestlers.The same goes for returning NCAA qualifier Dane Pestano, who will also have 11 ranked wrestlers at 184 pounds.

The remaining three weights – 125, 165, 174 – have looked a little rough to start the season. The Cyclones unexpectedly had to call upon Jon Marmolejo to fill 125 [Editor’s note: Since this preview was written Iowa State has announced that Jakob Allison traveled with the team at 125 instead of Marmolejo]  pounds after Danny Vega left the program earlier this season, while 165 and 174 have struggled to find their starter. To begin the season many expected 165 to be a battle between Logan Breitenbach and Skyler St. John, but it was last year’s 157 pound starter Colston DiBlasi who got the call last weekend against Rider. Injuries have slowed Hank Swalla at 174, but after competing in two straight events may be ready to step up and take a hold of this role.