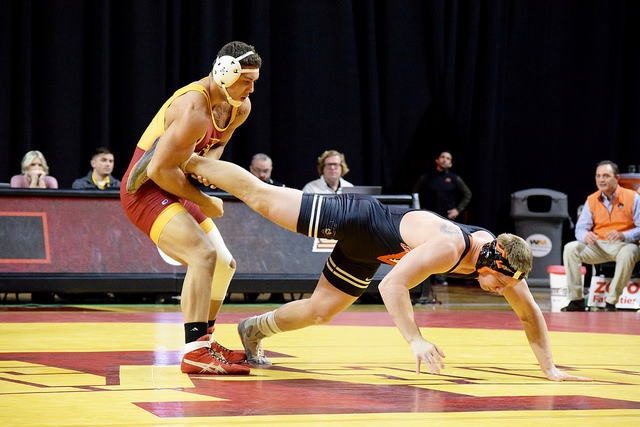 This season is finally here! The much anticipated debut of the Kevin Dresser Era Cyclones will open the 2017-18 season on their home mat at their self hosted, Harold Nichols “Cyclone” Open. There has been a lot of buzz surrounding this Iowa State program since Dresser was named the head of the program back in February. Over the past nine months Dresser has been able to keep the enthusiasm for his program at an all-time high (as an example, Iowa State announced they had sold a record number of season tickets for this season) all while trying to temper fans’ expectation of what this season will be.

A lot of Dresser’s attempts to slow play his team’s performance is based on the fact that while he squad has several promising wrestlers, a lot of that potential is on the younger side of their college eligibility. Despite all that this year’s team should be a step forward from last year’s with three key wrestlers moving up a weight class, and the addition of one redshirt freshman in particular that has set people in Ames and across the country buzzing.

That freshman is of course Kanen Storr, who looks to take over the starting spot at 141 for Iowa State after a 24-5 redshirt season. In a year that was full of disappointment, Storr was a beacon of hope that Cyclone fans were able to turn to as their team’s performance continued to nose dive. His debut featured a top 20 upset and tournament title at the Grand View Open and it ended with him being named The Open Mat’s top performing redshirt.

We will see three wrestlers making weight class changes this season for Iowa State including senior Dane Pestano making a return to 184 pounds where he was a NCAA qualifier at the weight back in 2016. Additionally, sophomore Markus Simmons is one of two wrestlers battling for the starting spot at 133 pounds and junior Marcus Harrington will move up to heavyweight.

While the Cyclones moved on from Kevin Jackson due to lack of results on the mat, the one thing he did not struggle with during his time as head of the program was recruiting. In 2016 Jackson amassed a top five overall recruiting class and that hard work looks to bear fruit this season. Along with Storr, four other Jackson-era redshirt freshmen will look to challenge for starting spots this season with Danny Vega and Sammy Colbray considered as favorites for the 125 and 197 pound spots respectively. Ian Parker is a legitimate contender to win the 133 pound spot and Gannon Gremmel enters as an underdog to win the heavyweight spot from Harrington.

The middle of Iowa State’s lineup will have a couple more lineup battles that should help determine the starting lineup for their dual home opener, which takes place the following weekend against Drexel. Sophomore Dante Rodriguez is back from his redshirt season and will battle Virginia Tech transfer Jarrett Degen for right to start at 149 pounds. At 157 pounds returning starter Colston DiBlasi will look to fend off fellow sophomore Chase Straw, who is moving up from 149. Finally, at 174 pounds we expect a three way battle to take place between sophomores Hank Swalla and Luke Entzel and JUCO transfer Danny Bush.

One of the reoccurring themes during Iowa State’s media day was the change in culture and training that the Cyclones have undergone since the coaching change. None said it better than Simmons, who in his media day interview stated that what the new coaching staff considered a “light” practice would have been considered a “hard” practice last season. While it’s true a majority of the wrestlers in the room were “Jackson-guys” first, Dresser is doing his part to develop, train, and convert them into his athletes.

After this weekend the Cyclone lineup should hopefully begin to materialize so fans can begin to see the team take shape. Another take away from the Cyclone media day that fans will be pleased to know is local product Marcus Coleman is in fact competing at 174 pounds this weekend. Coleman is expected to also be a big part of the plans to rebuild Iowa State going forward, as is Austin Gomez, the true freshman out of Glenbard North high school in Illinois. Unfortunately Gomez will miss this week’s competition, due to a concussion.

A look at Iowa State’s lineup:

One other Iowa school will open their season at this open in addition to Iowa State, as Northern Iowa will be in attendance as well. UNI recently completed their media day, and our own Nic Ryder previewed their season earlier this week.