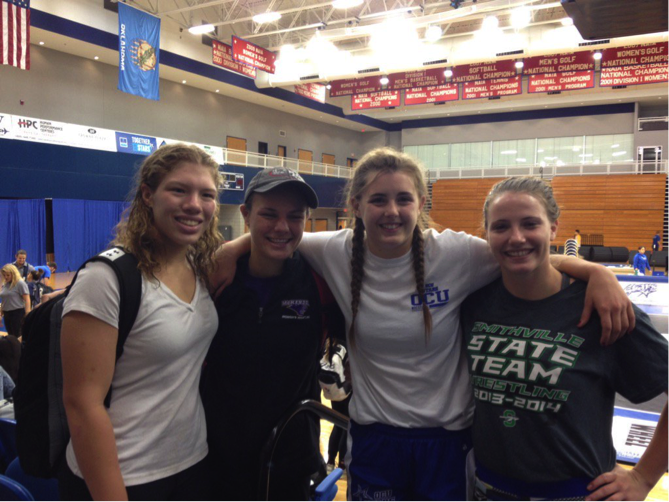 Earlier this summer United World Wrestling (UWW) announced the addition of the U23 division (ages 18-23) to provide an additional developmental stage between the Junior Division (which goes to age 20) and the Senior, Olympic-Level. In previous years, USA Wrestling has taken part in the University Worlds which was not a UWW event. Four of Iowa’s elite female wrestlers will attempt to secure their spots on the USA Wrestling U23 World Team this weekend in Rochester, Minnesota. The winners of the U23 World Team spots will compete in Bydgoszcz, Poland November 21-26.

Jasmine Bailey of Iowa City is going into her senior year at McKendree University as the 4th-ranked (143 pounds), 2-time WCWA All-American who will be competing at what Gary Abbott of USA Wrestling has deemed to be the 4th toughest weight class of the tournament, 69 kg (152 pounds). To secure her place on the team she will need to overcome 2017 University World Team member (69 kg) and #1 ranked Niauni Hill of Lindenwood-Bellville; 2016 WCWA National Champion (155 pounds), Forrest Molinari (TMWC); fellow Iowan, 3-time Junior World Team Member (72 kg), Rachel Watters (OCU/NYAC); and 2017 WCWA National finalist (143 pounds), Jessi Kee (NYAC/King University).

Megan Black of Batavia is a 3 time WCWA All-American senior for McKendree University and is currently ranked #1 in the WCWA Preseason rankings at 130 pounds. In addition, Black is the 2017 University World Team member at 55 kg and will be wrestling in the 7th toughest weight class of the tournament, 55kg (121 pounds) according to Abbott. Black’s toughest competition will come from 2-time Cadet World Medalist (Gold 2015, Silver 2016), Ronna Heaton (Sunkist) as well as 2017 WCWA 143 pound runner up, Dominique Parrish (Sunkist).

Rachel Watters of Ankeny is going into her sophomore year competing for Oklahoma City University. Watters (ranked 5th in the WCWA preseason rankings) achieved All-American status at 170 pounds in last year’s WCWA Nationals and is a 3-time Junior World Team Member at 72 kg. Watters will also wrestle in the 69 kg weight class alongside fellow Iowan, Jasmine Bailey of McKendree.

It is sure to be a great tournament with some of the best wrestlers in the nation battling it out this weekend. Be sure to follow along and cheer on Iowa’s own via Trackwrestling!