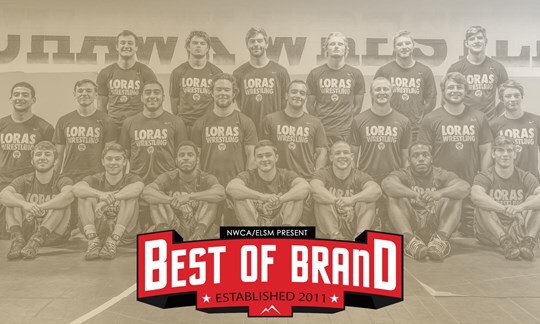 The Loras wrestling program was crowned the Battle Round Vote Champion in the annual NWCA/ELSM Best of Brand Highlight Reel Championship on Thursday, June 22, defeating fellow NCAA Division III counterpart Johnson & Wales with 705 votes. Over the four days of voting, the Duhawks totaled 2,466 votes for their highlight video submission.

The Best of Brand Awards are designed to reward programs for their investments made in marketing initiatives. There are total of seven awards for programs participating in the Collegiate Division, while high school and club programs will compete in the Open Division for three different awards. The Highlight Reel award rewards programs which create the best highlight video to promote their product. The development of innovative videos during the wrestling season is essential to building a program’s brand and the sport of wrestling as a whole. The winner is chosen based on two key elements: a panel of judges assessing video performance and quality in accordance to the award, as well as a social media campaign which concludes with an online voting component.

After nominating its 2016-17 highlight video back in April, Loras was seeded eighth in the field and opened the week with 137 votes to eliminate last year’s champion, Northwestern. In round two, it was the top-seeded Badgers of Wisconsin that fell to the Duhawks after Loras tallied 599 votes. In the semifinal round, the Duhawks broke the 1,000-vote barrier, totaling 1,025 votes to knock off the No. 4 seed Oklahoma City.

In his first season as head coach, TJ Miller led the Purple & Gold to a 12-7 dual record, which included a 7-1 mark in the Iowa Conference, good for a second place finish. Beginning on December 17, 2016, Loras won 10 consecutive duals, including wins over No. 10 Central, No. 13 Coe and No. 11 Cornell.

“The Best of Brand Competition is a great way to rally the support from our current wrestlers, faculty, staff, alumni, as well as friends of the program to come together during a time that collegiate wrestling isn’t in full swing,” Miller said. “The entire coaching staff enjoyed blasting out tweets, Facebook posts, text messages and emails to rally support, and in turn, it was amazing to see the amount of support we received. It goes to show you that Loras Wrestling has a loyal and dedicated fan following that reaches far and wide. A lot of the credit for the highlight video goes to our Director of Athletic Communications Jim Naprstek and his staff. They do a great job year round promoting our programs at Loras and so if anyone deserves the recognition, it’s them.”

This year’s highlight video was created by Director of Athletic Communications Jim Naprstek and his student assistant, Trent Hanselmann.

“It’s always a fun undertaking to create a season highlight video, but this one was special because of the vision that TJ Miller had with the video from the very start,” Naprstek said. “After we met and talked about it the first time, I could envision the final product in my head. Along with the help of Trent Hanselmann, we turned our combined vision into a reality.”

The winner of the 2017 NWCA/ELSM Best of Brand Highlight of the Year Award will be announced on August 5, 2017 at the annual NWCA Convention in Daytona Beach, Fla.