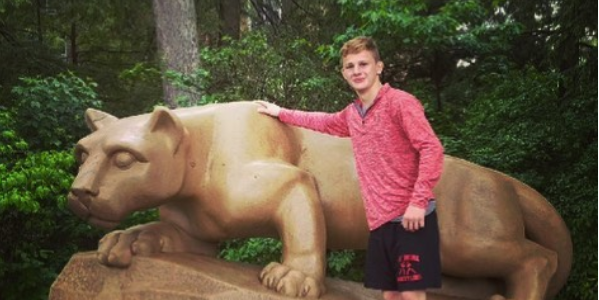 It appears that Cael Sanderson will stop at nothing when it comes to courting the nation’s top recruits, with Fort Dodge standout Brody Teske posting on Instagram a picture of his unofficial visit this past weekend. The three-time Iowa high school state champion is among the top lightweight recruits in the country has been entertaining offers from all the big instate programs – Iowa, Iowa State, and Northern Iowa – and apparently Penn State.

In a story for the Des Moines Register, Teske said he had narrowed his top schools down to a top seven, though outside of listing the three instate programs, no one other schools were mentioned. Although Teske has not released his schools, it’s not hard to guess that he’s received a call from every major program in the country, because not many would pass up on landing the nation’s #30 overall recruit.

Penn State is currently off to a red hot start to their 2018 recruiting, already receiving verbal commitments from four of the top five prospects. Among those recruits are #2 Gavin Teasdale (Jefferson Morgan, PA) and #4 Roman Bravo-Young (Sunnyside, AZ), both project to wrestle 125 or 133 pounds in college, the same weight as Teske.

In addition to being one of the top recruits in the class of 2018, Teske is also coming off a third place performance at the UWW Cadet Nationals in Akron, Ohio.

We will be discussing Teske’s visit on Potentially Dangerous Podcast tonight LIVE at 8PM on Facebook Live.