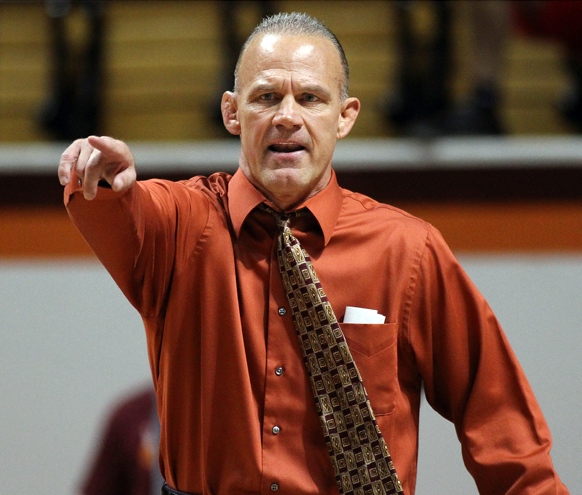 Individual wrestlers from elementary school through high school can go online and register for a camp that suits their skill and intensity level. PLUS, high-school coaches will want to register their entire roster for the four-day team camp in July. Team camp is a series of dual meets, and every wrestler gets at least 10 matches, with an ALL STAR match on the final evening.

“As a former high-school coach, I took my guys to a team-camp every summer,” says Coach Dresser. “It was the best thing we did to improve as a unit. When I became a college coach, I started offering a Team Camp of my own and got to see wrestlers’ progress from the other side of the coin.

The 54-year-old Humboldt, Iowa native, built a national power at Virginia Tech. Inheriting a team that won one dual in the year prior to his arrival, Dresser has led VT to Top 10 finishes at the NCAA Championship the last four years – including an all-time best fourth in 2016 – and it is currently ranked fifth. Dresser’s Hokie teams captured five ACC Wrestling Championships (two tournament and three dual titles) in the last five years. His teams also won 91% of their duals (48-5) the last three years.

Iowa State Athletics Director Jamie Pollard aimed high during the search with the goal of returning the Cyclone wrestling program to national prominence. Pollard believes Dresser’s championship pedigree as an athlete and coach will be a natural draw to recruits as well as an inspiration to the wrestlers on the current roster.

Dresser compiled a 160-51 dual record at Tech and won ACC dual meet titles in 2015-2016-2017 and league tournament championships in 2013 and 2014 (this year’s ACC tournament is March 4). He has coached 65 NCAA Championship qualifiers, 20 All-Americans and five ACC Most Outstanding Wrestlers. Dresser was named ACC Coach of the Year the last four years in a row and the state of Virginia’s coach of the year five times.

Much of the Hokies’ success can be traced to Dresser and his staff’s recruiting acumen. Six of his classes have ranked among the Top 11 nationally, including the 2013 group that was No. 2 according to InterMat.

Dresser was named Virginia Tech’s coach in 2006-07 after a legendary high school coaching career in Virginia. He led Christiansburg High School (1996-2006) to five state championships and three runner-up finishes in 10 seasons. Before that, he took Grundy High School (1988-96) to eight state titles in as many years. Dresser coached 69 state champions and four of his teams ranked in the Top 10 nationally.

As a competitor, he won two state titles and compiled a 112-11-1 record at Humboldt (Iowa) High School before a distinguished collegiate career at Iowa. The two-time All-American and two-time Big Ten champion won the 1986 NCAA Championship (when he won the Mike Howard Award as Iowa’s MVW) and placed fourth at the national meet in 1985. The Hawkeyes won national titles in each of his five seasons on the roster.

Mike Zadick is in his first season as an Associate Head Coach with the Iowa State wrestling program.

Zadick was a member of the Virginia Tech wrestling staff for two seasons prior to his arrival in Ames, helping lead the Hokies to national prominence.

In his two years at VT, Zadick was a key part of the team’s unprecedented success. The Hokies recorded a 34-3 dual mark, had 11 wrestlers earn All-America status and eight competitors won ACC individual titles in his tenure at the school.

Zadick joined the Hokie staff in 2015-16 as a volunteer assistant coach and was promoted to an assistant in 2016-17.

In 2016-17, Zadick helped lead another banner year for VT. For the sixth-straight season, the Hokies finished in the top-10 (6th, 63.5 points) at the NCAA Championships. Tech finished the tournament with five All Americans.

Tech’s historic 2015-16 season benefited from Zadick’s coaching and technique. VT finished fourth at the NCAA Championships, earning a trophy for the first time in school history. With third place finishes from Zach Epperly and Nick Brascetta, six Hokies finished in the top-six at their respective weight classes.

Brascetta became the second three-time All-American in program history, ended his career with three ACC championships and was a four-time NCAA qualifier. Tech’s fourth-place finish was also the best-ever by a team from the ACC, topping a fifth place finish by North Carolina in 1982. Tech won the ACC dual meet title for the second season in a row and finished runner-up at the 2016 ACC Championship.

Before joining the Hokies’ staff, Zadick spent 10 years at Iowa, serving as Iowa’s interim assistant coach for two seasons until 2012. He was a volunteer assistant for four seasons (2004-06, 2009-10) and the strength training coach for three seasons (2006-08) with the Hawkeyes.

As a member of the Hawkeye staff, Zadick continued to excel as a wrestler internationally. He was the 2009 U.S. Senior Nationals freestyle champion at 60kg, won the 2008 U.S. Freestyle Olympic Team Trials at 132 pounds (60 kg) and earned a spot in the 2008 Olympic Games in Beijing, China.

In 2007, he was the U.S. World Team Trials champion and won a silver medal at the Pan American Games in Rio de Janerio, Brazil. Zadick’s other international accomplishments include a silver medal at the 2006 World Championships in Guangzhou, China, and runner-up finishes at the 2004 U.S. Olympic Team trials and U.S. Nationals, and the 2005 World Team Trials challenge tournament

During his tenure at Iowa, Zadick helped the Hawkeyes to three NCAA and Big Ten team titles.

With Zadick in the lineup, Iowa set school records for longest dual unbeaten (84) and winning streaks (69).

A native of Great Falls, Mont., Zadick earned a bachelor’s degree in Sports Studies from Iowa in 2004.

Derek St. John is in his first season as an assistant coach for the Iowa State wrestling program.

St. John was a member of the Virginia Tech wrestling staff in the last two seasons, helping the Hokies achieve unprecedented success.

In 2016-17, St. John helped guide the Hokies to their sixth-straight top-10 finish at the NCAA Championships. VT finished sixth as a team with five individual All Americans. At the ACC Championships, Tech claimed its third conference title in school history, winning six individual titles.

In St. John’s first season at VT (2015-16), the team went undefeated in ACC duals and finished a program-best fourth at the NCAA Championships. The Hokies had eight NCAA qualifiers with six earning All-America status.

The Hokies won their second-straight ACC dual meet title and finished runner-up at the 2016 ACC Championships in St. John’s first season in Blacksburg.

St. John came to Virginia Tech after one season (2014-15) as an assistant coach at North Dakota State. The Bison finished 9-4 overall, including a perfect 5-0 mark in Western Wrestling Conference action, and 23rd at the NCAA Championships.

St. John, who won the 2013 NCAA title at 157 pounds, became the 18th four-time All-American in Iowa history in 2014. He placed fourth at the NCAA Championships as a freshman, second as a sophomore, first as a junior and fifth as a senior, claiming his spot as one of the most decorated Hawkeye wrestlers of all time.

The Parnell, Iowa, native concluded his collegiate career with a record of 106-17. St. John was the 2012 Big Ten champion and a two-time Big Ten runner-up at 157 pounds. He posted a record of 31-2 in his national championship campaign of 2012-13, earning Iowa’s Mike Howard Most Valuable Wrestler Award.

St. John graduated from Iowa in 2014 with a degree in business studies.

Brent Metcalf is in his first season as a volunteer assistant coach on Iowa State’s wrestling staff.

Metcalf served as the National Freestyle Developmental Coach prior to his arrival in Ames.

Metcalf joined the USA Wrestling coaching staff in November of 2016. He operated under National Freestyle Coach Bill Zadick, who is the older brother of ISU Associate Head Coach Mike Zadick. His coaching duties included coaching the age-group men’s freestyle World Teams, directing the freestyle resident athletes at the U.S. Olympic Training Center and serving as an assistant coach on the Senior national team.

Metcalf is one of the most decorated wrestlers in Iowa wrestling history. He won two NCAA titles (2008, 2010) and was three-time NCAA finalist (2008-10) in his three seasons wrestling for the Hawkeyes.

Metcalf was one of the most highly touted prep wrestlers. While wrestling for Davison High School, he posted a record of 228-0 with 156 victories by fall. He was one of the best athletes to wrestle in USA Wrestling’s age-group program, winning six ASICS Junior National Titles, three each in freestyle and Greco-Roman.

He earned his bachelor’s degree from Iowa in 2010.

Robin Wilson is in her first season with the Iowa State wrestling program as director of operations.

Wilson aided Dresser and his Virginia Tech program as a volunteer assistant for the Southeast Regional Training Center in Blacksburg, Va.

Wilson has been a reporter for the Chronicle of Higher Education for 32 years, joining The Chronicle as a staff writer in 1985. She has written numerous articles on faculty members’ personal and professional lives, as well as about issues involving students.

Wilson began her association with Dresser and the Hokie wrestling program when her son, Lex Ozias, joined the team in 2011.

A native of Detroit, Mich., Wilson received her bachelor’s degree from the College of Wooster (Ohio) in 1982.

Wilson and her husband, Darryl Ozias, have two sons: Lex and Coy. Coy was a member of the Princeton wrestling team.