Top 5 Matches to Watch at the North/South All-Star 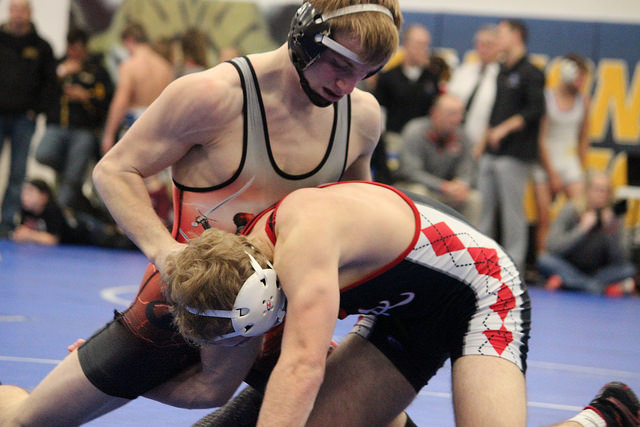 The 39th Annual North/South All-Star Wrestling Meet hosted by the Charles City Mat Club in conjunction with the Iowa National Guard is planned for Saturday, March 25th at 6:00 p.m. in the Charles City High School’s new gym.  Tickets available at the door for $10.

This year’s N/S All Star Meet will be broadcasted live by IAwrestle.com powered by Trackwrestling’s Trackcast with proceeds going to the National Wrestling Hall of Fame Dan Gable Museum.

You can purchase the stream for $10 or join the IAwrestle Season Pass for $65 to receive past and future video content by IAwrestle.com.

Carter Cox, four-time state qualifier and two-time placer (DNP, DNP, 2nd, 5th), entered the state tournament ranked No. 2 at 120lbs in 2A, hoping to get back to the state finals. After a first round setback to No. 4 ranked Shea Ruffridge, Cox went off to win 4 of 5 matches on the backside (he suffered another defeat to Ruffridge) to place fifth in 2017.

Brady Kyner, four-time state placewinner (6th, 4th, 2nd, 2nd), entered his final state tournament in search of the elusive gold medal, undefeated and ranked No. 2 at 120lbs in class 1A. Not only was he undefeated but he won each bout by bonus points.  Kyner fell one win short of the title, losing to No. 3 ranked Brock Henderson of North Linn in the state finals 3-0.

Midkiff, four-time state placewinner (8th, 5th, 2nd, 1st) entered the state tournament ranked No. 2 at 126lbs in 3A, in hopes to reach the finals for the second consecutive year.  Midkiff had to avenge a regular season defeat to No.1 ranked Adam Brown of Southeast Polk in the state finals to win his gold Medal.

Birt, three-time state qualifier (DNP, DNP, 1st) entered his final state tournament ranked No. 3 at 132lbs in class 3A. After a first round fall, he rattled off two tight victories before winning a high scoring affair against No. 2 ranked Cade DeVos of Southeast Polk to win the state title.

Chase McLaughlin, 2016 Class 1A 132lb runner-up entered the 2017 state tournament ranked fifth, looking for a return trip to the finals McLaughlin suffered a loss to the eventual state champ and another state placewinner to miss out on the podium.

Derek Holschlag (UNI Commit) and three-time placewinner (7th, 2nd, 3rd) had a successful senior campaign cut short due to injury, and was not able to compete after the sectional tournament. At the time Holschlag was ranked second at 132lbs in class 2A. This will be Holschlag’s first competition since February.

Zach Barnes, two-time state place winner (3rd, 1st) and No. 1 ranked at 145lbs in class 3A, wrapped up a successful senior season with a state championship with a dominant decision over No. 2 ranked Grant Stotts in the Finals. Barnes will continue his education and wrestling at Campbell University.

Xavier Miller, No. 3 ranked at 145lbs in 2A, earned a state medal after he successfully navigated his way through the class 2A 145lbs bracket to take second after suffering a 5-0 loss to three-time state champ and Iowa State recruit, Ryan Leisure in the finals.

Max Lyon, No. 1 ranked at 182lbs in class 3A, (13th Nationally) Purdue Commit, 4x State Placewinner (4th, 2nd, 1st, 1st) won his second state title in commanding fashion as he capped off a perfect Senior season with a 7-0 decision over No. 2 ranked Anthony Sherry of Glenwood. Lyon will continue his education and wrestling at Purdue University.

Taylan Entriken, entered the state tournament as the No. 2 ranked 170lbs wrestler in class 1A. Entriken is a two-time state placewinner (5th, 1st) capped off a superb season by winning the 1A 170lbs bracket in commanding fashion with a decision over No. 4 ranked Jarel Arbegast of West Fork.