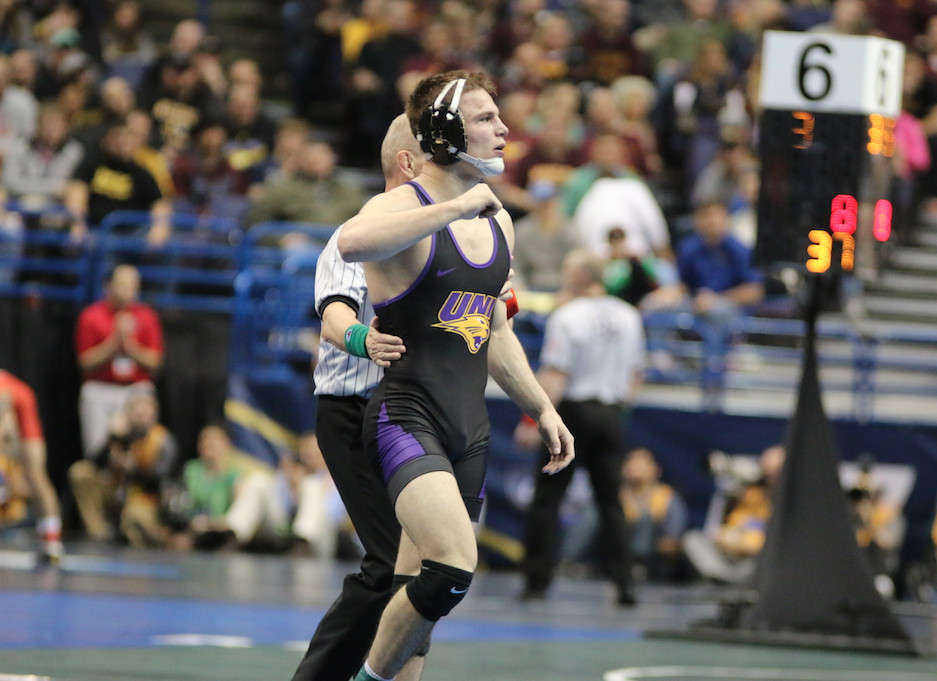 Logan Thomsen became an All-American at Wartburg last weekend for the Knights, when he finished as a runner-up at the Division III National Tournament in La Crosse, Wisconsin.

Max Thomsen was looking to do the same thing this weekend but in St. Louis and he just punched his ticket.

“It’s just a mental game. Focusing on other things besides just winning. Getting better, and getting the most out of my career,” Thomsen said. “I’m trying to get the best Max Thomsen out on the mat.”

Thomsen took a scoreless match into the second period with Rutgers’ Kenny Theobold. Theobold went down to start the second, gave up a two point nearfall was ridden out the entire period. Thomsen scored another takedown and with riding time he won 5-1.

“It just changes the momentum of the wrestling. It’s huge, it elevated me, and it sunk him under,” Thomsen said of the two point nearfall.

Thomsen will match up with Lavion Mayes for the spot in the finals tonight. It’s the fourth time this season the two have matched up, with Mayes having a 2-1 series lead.

“It doesn’t matter who it is, I’m going to come out and try to get to my offense and try to win the match.”

The other Panther quarterfinalist, Drew Foster, drew a tough match against Oklahoma State’s Nolad Boyd. The two had wrestled once this season, with Boyd taking a 10-5 decision at the Southern Scuffle. Foster closed that gap a little bit, but lost 11-7.

Foster wrestled a tough, disciplined match though. And in the second period he took Boyd down to his back and scored a two-point nearfall. The two were on the edge and eventually Boyd was able to work out of bounds. Foster will drop to the bloodround tonight to wrestle to be an All-American.

We’ll have full results from the backside wrestlers later today. So far (as of 1:10PM CST) UNI is 3-1, with Dylan Peters falling to Buffalo’s Kyle Akins, 9-6. Alber, Steiert, and Lujan all won their first matches with another to come this session.

Update on UNI’s consolation round:

Bryce Steiert won his second consolation round match against Iowa’s Joey Gunther. Steiert built up a nice 6-0 lead in the first period after a takedown and four point nearfall, then held Gunther off for a final of 8-3. Steiert will join Foster in the bloodround later tonight.

Josh Alber and Taylor Lujan both lost their second consolation round matches. Alber lost to Rutgers Scott Delvecchio 4-3. Delvecchio took Alber down late in the third period to gain a 4-3 lead, and Alber could not get out from bottom to tie the match.

Lujan lost 14-6 to Navy’s Jadaen Bernstein. Lujan took an early 2-0 lead, but Bernstein was able to keep the Panther away for the rest of the match.