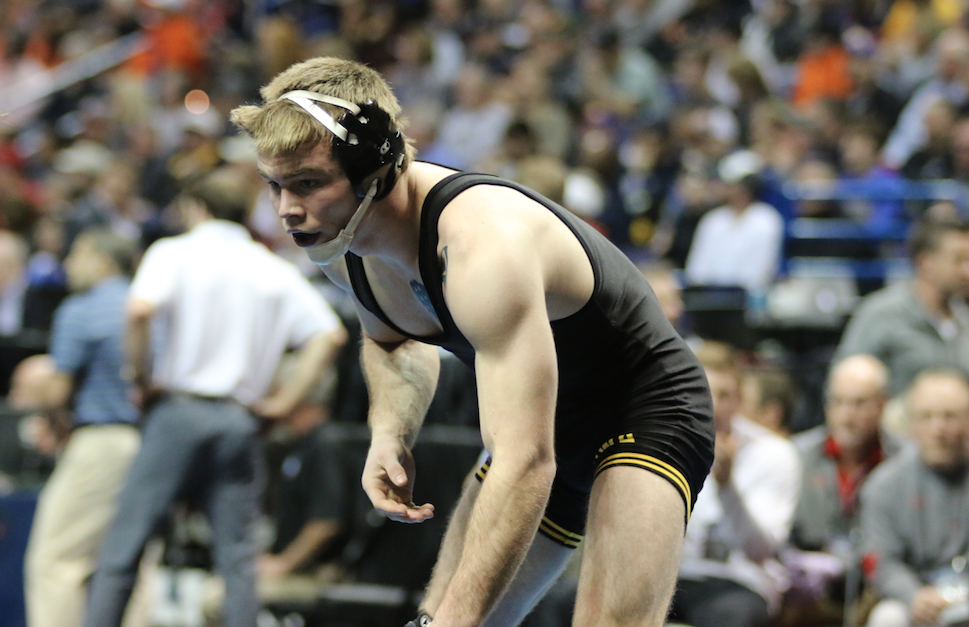 It was a round the Hawkeyes needed, as all nine wrestlers will advance to Friday morning’s session, including six wrestlers to the quarterfinals. Iowa is led by their senior quartet Thomas Gilman (125), Cory Clark (133), Alex Meyer (174), and Sammy Brooks (184) with junior Brandon Sorensen (149) and freshman Michael Kemerer (157) joining their teammates in the quarterfinals.

Gilman kicked the round off for the Hawkeyes with his second straight major decision of the tournament, this time against Campbell’s Nathan Kraisser. This will be the third straight trip to the quarterfinals for Gilman, and his opponent tomorrow will be a re-match with Oklahoma State wrestler Nick Piccininni, who he defeated by major decision in their only regular season meeting.

Clark followed his teammate with a 10-5 decision over Princeton’s Pat D`Arcy at 133 pounds to return to the quarterfinals. The weight’s reigning two-time runner-up will be matched up with Michigan’s Stevan Micic who Clark beat 2-0 in the dual earlier this year. With a win in the semifinal’s Clark would join Derek St. John as four-time All-Americans who began their careers under Tom Brands.

Sorensen picked up a 6-2 decision over Andrew Crone of Wisconsin to head back to the 149-pound semifinals, and he too will face a familiar opponent in the quarterfinals in Ohio State’s Micah Jordan. The pair have met twice this season with Sorensen winning the dual meeting, but Jordan getting revenge in the Big Ten semifinals a few weeks prior. A win for Sorensen would lock up the junior’s third straight All-American honor in his career.

After earning a first round major decision, Michael Kemerer (157) found another gear against Chase Delande of Edinboro, winning 22-6 TF in the second round. Kemerer heads to his first ever quarterfinals and will face Cornell veteran Dylan Palacio, the #7 seed.

Iowa got fireworks in the upper weights were Alex Meyer picked up a 7-5 upset over #6 seed Ryan Preisch of Lehigh, followed by a Sammy Brooks pin over Edinboro’s Dakota Greer. Meyer will face Ohio State’s #3 seed Bo Jordan, who narrowly beat Meyer in their only meeting this year, while Brooks will have #11 seed Emery Parker of Illinois.

Iowa got a boost on the consolation side of the bracket with Topher Carton (141) picking up a technical fall over WIsconsin’s Cole Martin and Joey Gunther (165) gutted out a tough 3-1 victory against Lorenzo De La Riva of CSU Bakersfield.

The Cyclones had a rough round in St. Louis as two of there three qualifiers saw their tournament end on day one. Two-time All-American Earl Hall (133) fell to Stanford’s Connor Schram, 6-5 in the consolation round and Marcus Harrington (197) was eliminated by Cornell’s Ben Honis 11-2. Returning All-American Lelund Weatherspoon (174) is the only remaining Cyclone, after dropping his second round match to Jordan, 10-4.

UNI saw a strong performance in their first day of the tournament, sending two wrestlers to the quarterfinals. For more on that head over to Nic Ryder’s recap.