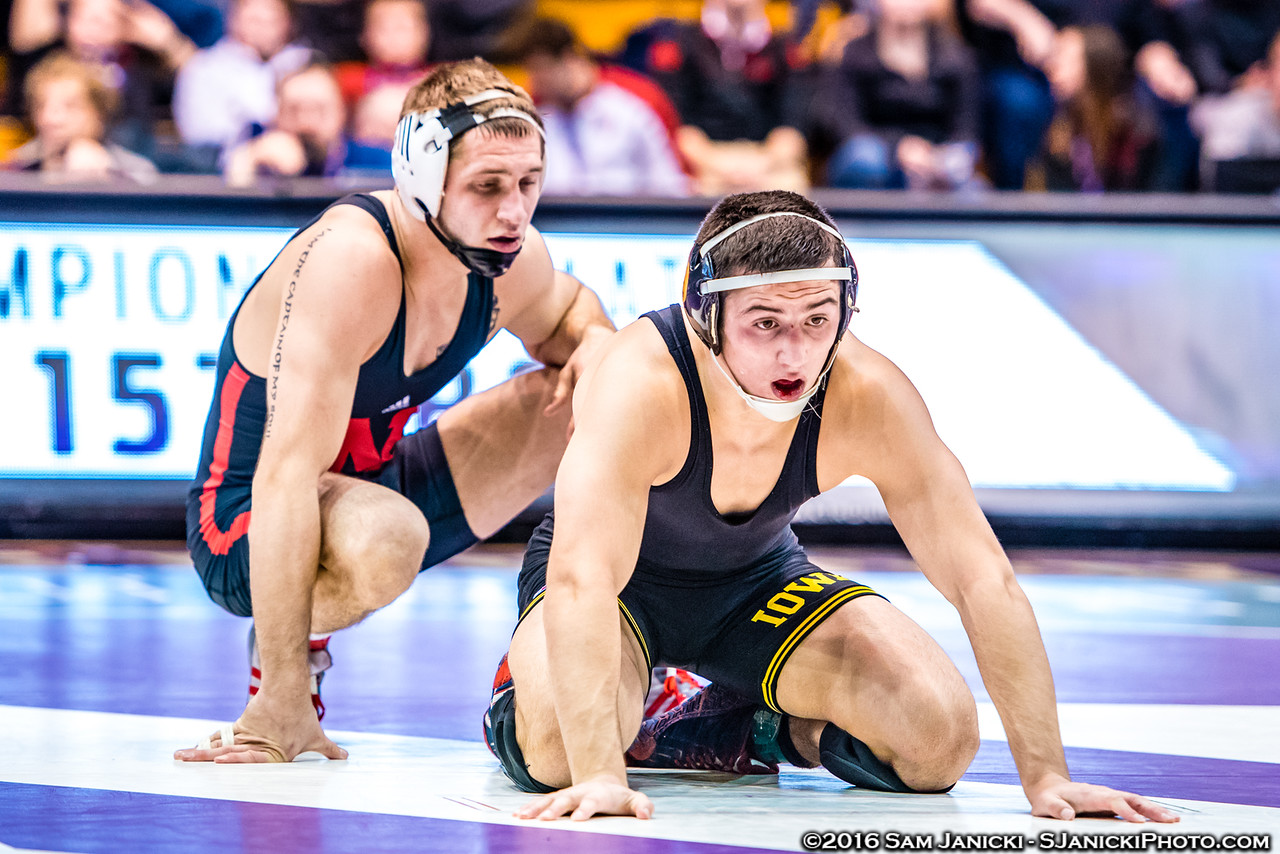 Senior day is upon us with the Iowa Hawkeyes welcoming in the neighbors to the west, the Nebraska Cornhuskers. The Hawkeyes have rattled off four consecutive dual victories since losing back-to-back duals against Oklahoma State and Penn State. The Hawks are coming off of a 32-7 victory over Indiana Friday night, without senior Cory Clark and Sammy Brooks in the lineup. The Huskers are coming off a 24-13 loss to Ohio State, which was highlighted by #3 ranked TJ Dudley being upset by Myles Martin at 184 pounds.

The Hawkeyes could have as many as five seniors in the starting lineup versus Nebraska on Sunday, potentially setting foot on the floor of Carver for the last time as competitors. This senior class has had no shortage of success, combining for seven All-American honors, three NCAA finals appearances, and two Big Ten titles. In additional to accolades, both Thomas Gilman and Sammy Brooks are each closing in on 100 career victories.

125: After returning to form in his Friday night bout with Elijah Oliver, Gilman will come into his match #5 Tim Lambert with a little weight on his shoulders. Gilman is 5-0 in career against Lambert and not only do the Hawks need Gilman to make it 6-0, but they will also lean on the senior to continue his three match bonus streak against the Cornhusker. Gilman has won his last three meeting against Lambert by major decision, and with this dual expected to come down to the wire bonus points will be at a premium from Gilman.

141: The 141 bout not only features two ranked wrestlers, but both Carton and McCrystal are also former Iowa prep wrestlers who are set to square off tomorrow. In their only career meeting Carton won by technical fall over McCrystal at the 2015 Midlands. Since that time McCyrstal has blossomed into a solid starter for Nebraska, and currently sits at #10 in the nation. Despite being separated by five spots in the rankings (Carton is #15) this should be a tight battle between two guys looking to end their careers with All-American honors.

157: It was one of the more controversial matches early on in the season, but in their first career meeting Kemerer defeated Berger 6-5 to win the 157 pound Midlands title and since then the Cornhusker has regularly taken to Twitter to express his eagerness to get back on the mat with the Hawkeye (his latest here). Since than these two have established themselves as the #2 and #3 wrestlers at this weight behind Penn State’s Jason Nolf. This is one of the dual’s biggest swing matches, and the Hawkeyes will absolutely need it if they plan on defending their home mat.

165: Gunther will look to continue his positive momentum by trying to earn another win that Wrestle Stat’s computer is currently picking to go against Iowa. It may be the computer weighing experience against Gunther, but other than that the Hawkeye actually enters this match holding the advantage in the rankings. Gunther did lose to Nebraska backup Dustin Williams at the Midlands, but since entering Big Ten dual competition Gunther has wrestled right there with the best of them including a 7-4 defeat to #5 Vincnezo Joseph (Penn State) and taking #3 Isaac Jordan to sudden victory a week ago.

184: Last but not the least we will have Sammy Brooks vs TJ Dudley Round 5 in what will hopefully be another great match. Outside of last year’s dual meeting where Dudley pinned Brooks, this duo have had razor thin victories against each other going back to their redshirt freshman year in 2014. Their last meeting in Carver was Brooks 6-4 Big Ten title win over the Nebraska wrestler, but Dudley got his revenge two weeks later winning 9-6 at the NCAAs. The Kemerer-Berger match brings a lot of hype to it, but given this pair’s history this might be the biggest match of the dual.