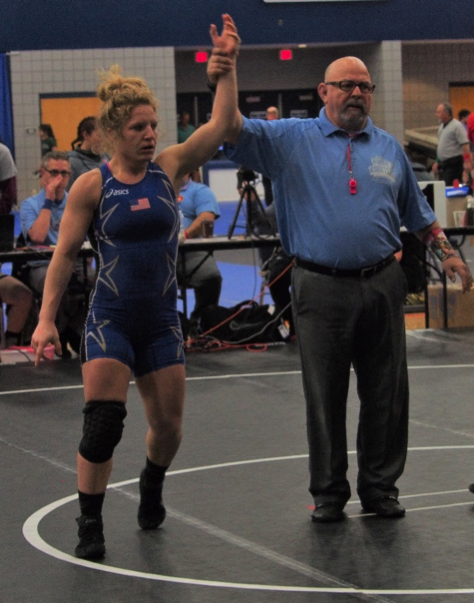 Louive Takes 4th at the Schultz

It was a week without competition at the college level as the women prepare for the WCWA Nationals this Friday and Saturday, February 10-11. At the senior level however, we had one adopted Iowan hard at work in Colorado.

Lauren Louive of the Hawkeye Wrestling Club/New York Athletic Club took 4th place at the open. Louive of Iowa City (formerly of Massilon, Ohio) wrestled for University of the Cumberlands in Williamsburg, KY from 2008-2013. She is a 4-time WCWA All-American and current volunteer Assistant Wrestling Coach at Cornell College (Mount Vernon, IA). Louive was a 2012 Senior Pan American Silver Medalist at 67 kg and is currently ranked #7 at 58 kg in the USA Wrestling Senior Women’s Rankings (January 4th).

Louive wrestled in the 58 kg (128 pounds) bracket and started her tournament with a 6-0 win over Koral Sugiyama of Campbellsville University (Campbellsville, KY). In the semi-finals, Louive gave up a 0-10 techfall to Miki Kawauchi of Japan but followed it up with a decisive 10-0 tech fall over Shelby Hall of Campbellsville to advance to the 3rd place bout. Louive faced #4 ranked Randi Beltz of Titan Mercury Wrestling Club where she lost by decision 2-9 to take fourth place in the tournament.

The women’s college wrestling season comes to a close this Friday and Saturday as the wrestlers descend on Oklahoma City for the WCWA Nationals. Five of Iowa’s own as well as the Waldorf Women’s wrestling program will be in attendance battling it out for those coveted National Championships and All-American titles.

Iowan’s who will be in the mix are:

Be sure to check Wednesday’s recap for complete details from the weekend!