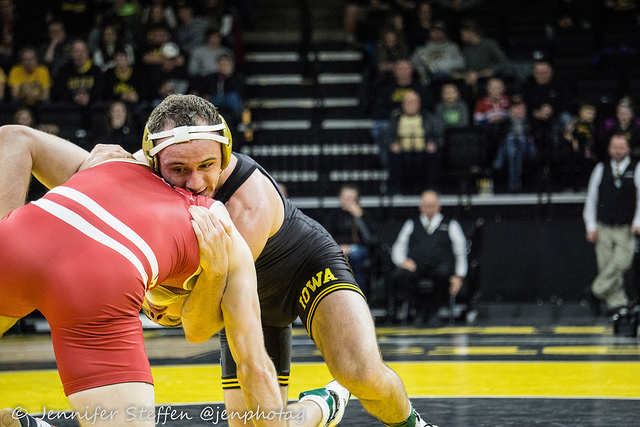 The Iowa Hawkeyes won their 10th dual of the season taking out the Minnesota Gophers 27-11. The Hawkeyes won a total of seven matches, four matches by major decision and picked up a fall in the 125 pound bout to fuel their victory. The biggest eye opener was Thomas Gilman falling behind early to Ethan Lizak, before he was able to storm back and pick up the fall.

The dual began at 149 pounds where Brandon Sorensen faced off against Brandon Kinglsey. Two years ago when Iowa wrestled the Gophers in Minnesota Kinglsey was the starter at 165 pounds and his loss by fall to Nick Moore sparked the Hawkeyes victory. This time around it was Sorensen’s bonus points who would provide the initial start for the Hawkeyes, winning 13-2.

Redshirt freshman Michael Kemerer made it back-to-back major decisions with his 13-5 win at 157 pounds against Jake Short. The pair exchanged takedowns early in the first period, but from there it was all Kemerer as he scored five unanswered takedowns to pick up the bonus point and put Iowa up 8-0 early.

This week freshman Joey Gunther told the media that he was well aware that he needed to pull his weight for Iowa to be in the national title picture, and on Sunday he did his best to live up to that statement by earning the upset over Nick Wanzek, 5-2. Gunther scored late in the first period to take a 2-0 lead in the match and then held of a late charge by Wanzek to secure the win. The score was 3-2 late in the match when Wanzek went for a desperation headlock. Gunther sagged out of it and was able to cover for his second takedown of the match.

The Hawks got their third and fourth major decisions at 174 and 184 pounds with seniors Alex Meyer and Sammy Brooks winning 10-1 and 10-2 respectively.

Minnesota was finally able to get on the board at 197 pounds where sophomore Mitch Bowman got the start as planned instead of freshman Cash Wilcke. Minnesota’s #2 ranked Brett Pfarr did what he does best and racked up 19 points along the way to a technical fall. Minnesota made it two straight at heavyweight where Michael Kroells won 3-0 against Steven Holloway.

Things got interesting at 125 pounds when Minnesota’s Lizak taking an 8-0 lead over #1 ranked Gilman in the first period. Looking at his first major deficit of the season, GIlman chipped away at Lizak’s lead with a reversal in the second before picking to start neutral in the third. It was there Gilman added two straight takedowns, and on his second he was able to whip Lizak over to his back to pick up a fall and keep his perfect season intact.

Also: Iowa’s bench during the fall by Gilman will go down as an instant classic:

Disregard the come from being fall. Watch the Iowa bench. 😂 pic.twitter.com/39hCvl03Tu

Three-time All-American Cory Clark made his return to the lineup at 133 pounds after missing his team’s last two duals against Ohio State and Wisconsin. Clark was his normal self, scoring two takedowns and also got four near fall points in the third. A late takedown by Mitch McKee erased the major decision, final score 10-3 for the Hawkeye.

Minnesota’s Tommy Thorn closed the dual out by winning 3-2 over Iowa’s Topher Carton at 141 pounds.

The win moves Iowa to 6-1 in the Big Ten, and will they wrap up conference action next weekend when they travel to Indiana to dual the Hoosiers on Friday and then hosting Nebraska on Sunday. The Hawkeyes are currently second in the Big Ten standings with Virginia Tech, Missouri, and North Carolina all potential options for the Hawkeyes’ NWCA National Duals opponent.