Iowa vs PSU Play by Play 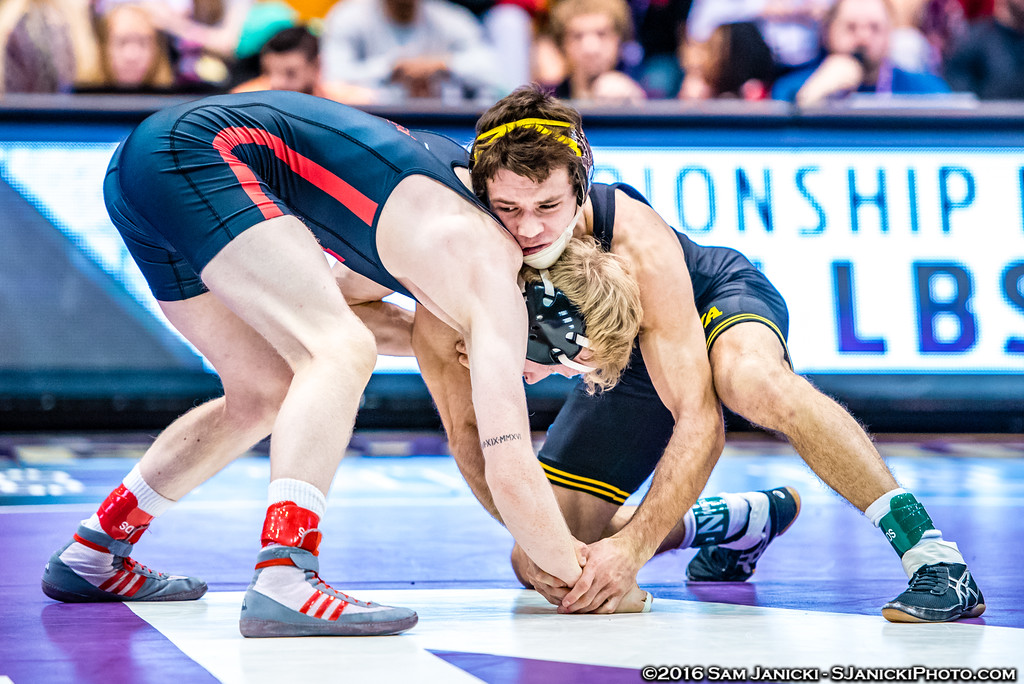 Dual is scheduled to start at 8PM, refresh often for updates!

Pre-dual notes: Starting at 125. Sam Stoll OUT for the season.

Hit me up with questions on Twitter @rossbchek or below in the comments below.

(Matchups go BOLD when they are live)

1st: Both guys trying to move the other’s head. Suriano with a nice snap to take Gilman to his knees, but Gilman up to his feet quickly. No offensive attempts midway through this period. Right at 1:30 Gilman takes a shot and is in on a single, shelfs the leg and trying to trip and cover the hips he does for a takedown. Suriano out right away for his escape. Snap front headlock situation for Gilman Suriano has his harm posted so Gilman can’t come around. Stalemated. Period ends 2-1 Gilman

2nd: Suriano picks down. looks like he is going to come up, but Gilman keeping a lot of pressure on Suriano to keep him on the mat. Now Suriano on his seat, trying to come around and gets up and spins out. Gilman with :50 RT accumulated. Gilman trying to work a snap, shot by Suriano, reshot attempt no good for Gilman. Period ends tied 2-2

3rd: Gilman takes down, caution Suriano on covering too early. Gilman tripod up off the whistle, to his feet breaks the hands and is out with 1:45 to go. Suriano gets to the leg, but unable to get a good hold and Gilman bullies his way out of the shot. Shot attempt by Suriano again, and Gilman fights out of it. Double stall warning. Another shot by Suriano  Gilman survives.

1st: Clark with the full shoulder sleeve on again this week, in a two-on-one arm tie where he is able to score a takedown less than :40 in. Clark sinks a leg in and looks like he’s going to go to work on top. Carpenter up to his feet for the escape, Cory back to his Russian, switches off to the leg for another takedown. Clark looking clean to start things off. Clark has him bellied out, head on the mat and rolls through for a tilt. Looking to go again and gets 4NF to close the first, 8-1 Clark

2nd: Clark starts down and is up in out. RT in his favor over 2:00 at this point. Looking to score again and does off his Russian tie. Lets Carpenter back to his feet for the escape Carpenter warned for stalling, snap front headlock for Clark, looking for a go behind, now he switches to a Russian, drops to the leg and finishes a takedown with short time. Clark leads 13-2

3rd: Carpenter starts down, warned for stalling, point Clark. Carpenter to his feet for the escape, Clark with a go behind for another takedown. Brands yelling to cut, Clark does. Shot by Carpenter, Clark comes around to score. Puts a leg in and has a powerhalf Clark gets the TF with Riding time point

1st: Topher snap right off the whistle, then another and has Gulibon in a front headlock, looked cowcatcher, but Gulibon up to his feet. Now Gulibon in on a single brings it up to his feet, trying to finish, brings Topher to the mat, Topher spins out of the hold and around the back for a takedown with 1:45 to go. Gulibon to his feet on the edge, but they go out. Gulibon gets to his feet, mat return by Topher and he has a leg in and now working a powerhalf. Has Gulibon completely bellied out. Carton trying to roll a wrist under now, Gulibon trying to come around for a reversal, Topher keeps his hips and manages to stay on top for the rideout. 2-0 Carton

3rd: Gulibon starts neutral. Comes in on a high crotch, comes around and scores a takedown on Topher. Stalemated. Gulibon puts him on his feet on the restart, 4-2 lead for Topher. Front headlock, Topher comes up and Gulibon gets a leg and takedown. Gulibon releases Carton. Gulibon in again and gets another takedown. Gulibon now leads 6-5 with :37 to go. Gulibon cuts Topher 6-6, goes for the takedown and gets the lead, 8-6.

2nd: Sorensen defers, Zain picks down. Caution on Zain. Up to his feet, Sorensen cuts him has :08 RT, 4-3 for Zain now. Shot by Zain, Sorensen sprawls out of it. Single attempt by Zain, now switches to the other leg and Sorensen fights out of it. Period ends 4-3 Zain

3rd: Sorensen takes down, sitout up to his feet and is run out of bounds. Zain tries to put a leg in and has a power half, Sorensen up to his feet with Zain on his back and they stalemate it. Sorensen up and out this time, RT will not be a factor at the moment. 4-4 score Single by Sorensen he finishes for a takedown, Zain gets out and is in on on a single and catches the ankle. Zain warned for stalling hanging on the leg. Sorensen starts down with :17 to go, and gets out to tie it up 7-7

SV: Nothing headed to TBs.

TB Sorensen down: Sorensen gets to a sitout, trying to dig Zains leg out and gets the escape. RT in favor of Zain :09

SV2: Sorensen comes with a shot, go behind attempt Zain not there. Another shot by Sorensen.

TB Sorensen down: Sitsout, back to his base, bellied out gets the rideout.

TB Zain down: Sorensen has to cut Zain get the TD for the win. Zain. Zain blocks off all of Sorensen’s attempts

1st:  Nolf in on a single, brings it p to his feet trips, splits by Kemerer, Nolf tries to bring it up again, leg pass situation for Kemerer and they end up ruling potentially dangerous. Nolf in on the leg again, Kemerer has a whizzer, now grabs an ankle looking to go leg pass, Nolf trying to come around behind, stalemated. Miday through the period. Straight on shot by Nolf and he’s trying to come out the back door, stalemated. Nolf in on another shot, Kemerer warned for stalling. Stalemate. Shot Kemerer, reshot Nolf, Kemerer gets back to his feet nothing doing. Scoreless.

2nd: Nolf starts down, to his feet, granby roll and Kemerer follows Nolf has Kemerer’s leg now trying to pull him off the top. Now Nolf gets his feet and Kemerer cuts him. Nolf in on a single and finally finishes one. Minute left in the period. Nolf cuts Kemerer. Ankle pick by Nolf, Kemerer in the splits to fight it off, but Nolf gets around the back sticks the leg in and gets the takedown. 5-1 Nolf

3rd: Kemerer takes down, up to his feet, returned by Nolf. Blood time for Kemerer. Nolf cuts Kemerer on the restart, Kemerer in on a single, Nolf flattens him out. Now Kemerer works up to his knees, stalemated. Nolf on a single, coming out the back door and gets the takedown. Cuts Kemerer.  Ankle pick takedown Nolf, cuts Kemerer. Kemerer tries a shot, reshot Nolf trying to step over  for a takedown, Kemerer hangs on to the leg to prevent the score.

1st: Joseph in on a single and switches off to the double for a takedown. Joseph cuts Gunther, double by Joseph trying to finish and does on the edge. 2:08 to go Gunther back to his feet, gets warned for stalling for backing away. Joseph finishes a single leg takedown with just under a minute to go. Escape for Gunther. Period ends 6-3

2nd: Gunther starts down, Joseph trying to chop the near arm, now looking to lock a cradle up, Gunther gets out and hooks and ankle almost got around for a reversal but they go out of bounds. Gunther gets an escape, Joseph in a on a single on the edge and its stalemated. Gunther fighting hard in the front headlock position, both guys up to their feet. Period ends 6-4 Joseph

3rd: Joseph starts down, comes to his feet and tries to granby and Gunther follows. Joseph back to his feet turns in to Gunther for the escape. Joseph warned for stalling. High crotch attempt by Gunther. Joseph wins

1st: Hall in on a leg and gets the far ankle for a takedown. Meyer on his seat, works up to a tripod, Hall spins him back to his seat. Meyer bellied out, working up to his base, tripod, sitout by Meyer. Meyer comes up and Hall releases. Hall has Meyer in a front headlock. Hall in a leg, Meyer looking to drop to grab a leg and go leg pass, Hall takedown, Meyer gets the leg and trying to come around.  Now they are signalling no takedown. So it’s 2-1 after the first.

2nd: Hall starts down and gets an escape. Duck under attempt by Hall. Now Hall in on a single, Meyer, trying to break the hands to come around for a takedown and gets it! Meyer finishes the rideout 3-3 score. RT is 0:00 even

1st: Sammy Brooks gets pinned by Bo Nickal. I am going to level with you. It happened so fast I’m not sure what even happened

1st: Nothing doing after 1:30. McCutheon drops to a leg and comes behind and grabs the other ankle for a TD with :45 remaining. Wilcke up to his feet, kicks away on a return attempt. Period ends 2-1 McCutcheon

2nd: McCutcheon takes down and is up to his feet and out in :06. 3-1 lead for McCutcheon. Cash warned for stalling. McCutcheon in on a single attempt, Cash with a whizzer and fights off the score attempt, back to their feet. Period ends.

3rd: Cash starts down ang gets out. RT not a factor. 3-2 lead for McCutcheon. Cash tries a low ankle shot, McCutcheon fights int a front headlock and now both back on their feet. Duck under by Wilcke and he scores with :32 to go. McCutcheon gets the escape and they are tied 4-4

SV: Wilcke drops in for a single, reshot McCutcheon and Wilcke spins out of it back to their feet.

TB Wilcke down: Wilcke to his feet gets the escape. McCutcheon RT :33

TB McCutcheon down: Wilcke riding, McCutcheon to his feet, and has to cut him before getting hit with stalling. McCutcheon wins on RT criteria.

1st: Nevills coming in on some shot attempts, Holloway defending. Nevills now grabs a single and finishes for the takedown. Holloway having a hard time work up to his base. Nevills doing a good job breaking him down every time he does. Holloway warned for stalling. Nevills cuts after riding for 1:16. Holloway comes in on a shot, Nevills blocks it off and gets the takedown with short time. 4-1 lead for Nevills.

2nd: Nevills starts down and gets his escape. Holloway drops down and locks aorund the leg, Nevills breaks it and comes around for his third takedown. Holloway warned for stalling again, Nevills gets a point. 8-1 Nevills lead