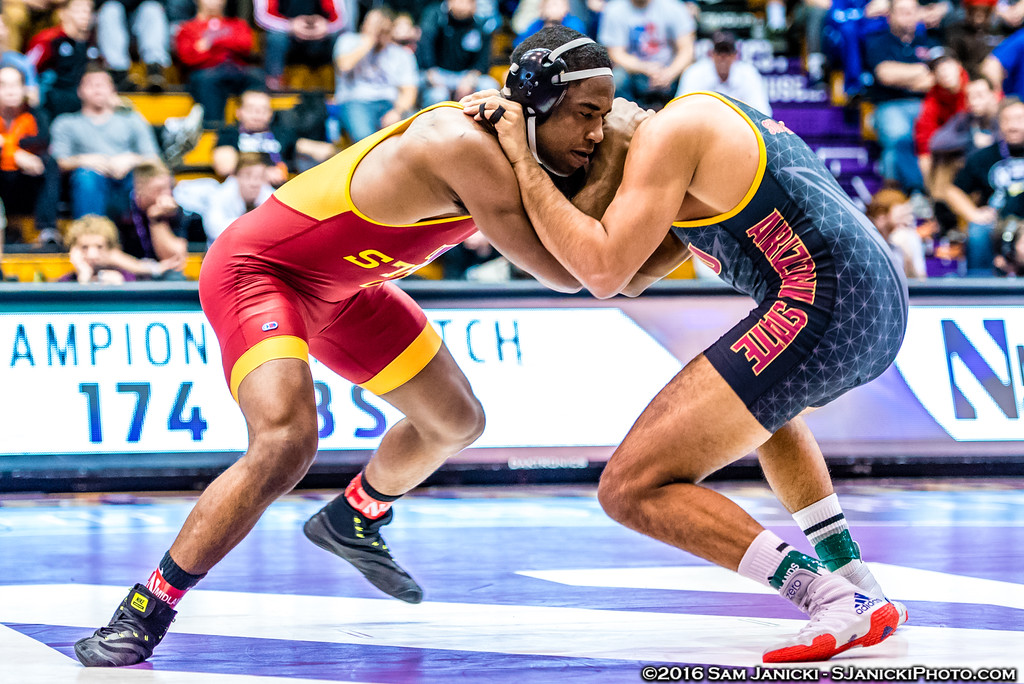 Dual is Scheduled for 6:30 PM in Ames. Refresh often for updates! I will do my best and hopefully Wi-Fi cooperates. For specific questions, try tagging me on twitter @IAWrestle or @Swallamerican.

NO Kramer here tonight for ASU. Michael Nguyen for them.Simmons gets in deep on a shot and a scramble ensures resulting in FALL! FALL for Simmons at the 1:30 mark!

Hall in deep early. Stalemated he cant finish.Not Naser out there. Will get an update on the ASU wrestler. 1:30 left not much action.Hall takedown in a scramble after an ASU shot.Escape for ASU. Hall with BIG double at the end of the 1st. Hall leads 4-1 going into 2nd.ASU down, quick escape. ASU wrestler is Ted Rico. BIGGG double for hall for 4. HE leads 8-2 now early in the 2nd.Escape Rico. :50 left. Rico takes a shot, stuffed by Hall but no points. Hall starts the 3rd down. Hall leads 8-3.Hall quick escape from the crab ride. 9-3 Hall.Hall single leg and finish! leads 11-3 and will have RT soon.Hall gets RT at 1:01 then Rico escapes. He leads 11-4 w RT and 40 left.Hall big double with 4 seconds left and wins 14-4.

Up next here is indeed John Meeks vs. Nikko Villareal. Villareal pinned ISUs Gabe Moreno earlier this year. Lot of tough handfighting early.Meeks takes Villareal way off the mat. 1:30 left.No shots either wrestler so far, no warnings for stalling. 45 left.Just as i say that, stall warning on Villareal. Villareal with a big brace on his left knee. Stall warning on meeks after a Villareal shot.  Meeks dives at the end of the period and 1st ends scoreless. Meeks chooses down to begin 2nd.2 cautions in a row for Meeks. Hopefully doesnt burn him later. Stalling on Villareal for not attempting a return, Meeks takes a 1-0 lead.Villareal still riding tough here. Villareal w 41 seconds RT.Villareal finally breaks Meeks down has a bar and a wrist. Stalling on Meeks, tied at 1-1 and Villareal w 1:30 RT.Villareal rides out and has 2:00 RT. Villareal goes down to begin3rd, tied at 1. Meeks kicks him early, trails 2-1.Wow, another stall on ASU, match is now tied at 2, but Villareal with RT. Ref is really hard on stalling. 1 minute left…Villareal w a few half effort shots, and meeks in deep ona single! Villareal squares his hips up, stuffs Meeks and wins the match 3-2 with RT.

Straw in early with an elbow pass to shot and finishes quickly for a 2-0 lead.Straw kicks him and gets 24 RT. 2-1 lead with 140 left.Straw shoots a double, switches to a single and finishes shortly after! He leads now 4-1. Straw riding tough and returning often, now approaches 1 minute RT. Straw gets to 1:04 RT and lets him go. Straw in again quickly ona single, but Maruca able to whizzer out of it. Maruca gets an ankle pick in the last 3 seconds and ties it at 4.Straw down to start second, holds 101 in RT. Dangerous position here as Maruca is trying to crab ride Straw and nearly pins himself. Maruca now with a 4 count, and goes up 8-4.Maruca working a bar hard here now but cant turn him.Maruca working real hard here, has a wrist and gets a tilt. Straw also picked up a stall warning there. Maruca chooses down to start the 3rd.Maruca out quickly, leads 11-4. Maruca has 51 RT now. Maruca quick overcollar shrug, now leads 13-4.Maruca now gets a tilt and is up 17-4, has RT locked. Maruca gets another 2 on 1 tilt and wins 19-4. Straw looked good early but got in trouble on the bottom.

Diblasi up now.Shields is very tough on top and both wrestlers are funky.Not much action here early. Shields in deep on a single on the mat and finishes.Escape Diblasi, Shields gets 26 RT. Shields digging alot of underhooks. He throws it by to a single and Diblasi whizzers hard. Diblasi dives underneath and the period will end. Diblasi chooses down to start 2nd.Shields riding crab ride here and is close to backs.Shields briefly has  a bottom leg cradle but Diblasi weasels his way out. Shields now has 141 RT w 45 seconds and a restart.Shields gets a roll through 2 on 1 tilt and gets a 2 count. He now leads 4-1 w 2:11 RT. Shields rides out the period and leads 4-1.Shields down to start the 3rd. Diblasi immediatly goes side headlock.Shields nearly has Diblasi reversed and Diblasi pulls a turn i have never seen before and gets 2 backs.4-3 now for Shields, and Diblasi almost has RT erased. Diblasi gets rid of RT but falls 4-3. Diblasi one of the strangest wrestlers I have ever seen on top.

Logan Breitenbach in for the Cyclones instead of Dane Pestano. Sidelines early this year due to knee injury. Breitenbach in early on a single, but Valenca pulls the far ankle. Stalemate ensures. Big blast double by Valencia and finishes. 2-0 lead for him. Now riding hard. Valencia getting some RT and nearly turns. Breitenbach out now. Valencia 118 RT. Valencia another blast double, stopped. Valencia double overs Logan to his back, cant get any back though. Period ends Valencia 4-1. Logan down to start 2nd.uh oh big trouble here Valencia does a suicide cradle and getting swipes. Logan fights off his back, now trails 8-1 after a 4 count.Valencia continues to ride hard and picks up a 4 count on a tightwaist tilt. Period ends and Valencia will go down. Valencia goes from a tripod and hops over Logans hips, and cant quite get the fall. He wins 18-1.

Big matchup here, rematch of the Midlands finals. Valencia is a freshman but is excellent, has majored Weatherspoon twice now this season. Lots of shot attempts by Valencia but cant get to a leg. Valencia high crotch attempt followed by a stall warning on Valencia. tons of attempts from Valencia but cant get through. Second stall warning on Weatherspoon, now trails 1-0.Valencia down to start 2nd.Out right away.Single to duck for Zahid at the 110 mark, and leads 4-0. Valencia is just relentless.Valencia riding hard now, and gives up the escape after 35 RT. 4-1 score. No action to close the period. Weatherspoon chooses down to start 3rd.Valencia with Lelund broken down now, trying to work a tilt. Valencia has 103 RT.Valencia gets 138 RT and kicks him. Valencia leads 4-2 w RT. Valencia in on a single to end the match. Valencia really impressive in a 5-2 win.

Pat Downey is indeed in for the cyclones and nearly finishes a shot but gets thrown by. Small leads 2-1. Downey bullies ASU off the mat and gets a stall warning.Downey with an elbow pass to shot, comes up to the body and gets a takedown. He leads 3-2. Downey kicks him after riding for 1 minute, and gets another quick takedown. Downey leads after 1 5-3 and has 127 RT.Downey goes down to start 2nd, and immediately gets out.Downey head hunting upper body now.Downey gets another takedown on an elbow pass to body and kicks him. Downey has 1:56 Rt, and hits a beautiful blast double. He leads 10-4 heading into 3. Small will choose down to begin the period. Downey tries a cradle, cant get it and kicks him. Downey gets 2 takedowns about as fast as i can type and now leads 15-7. Another go behind TD and leads 17-7.  I think i got that all. Another stalling on Small. Downey now leads 18-7. Thatll end it, Downey wins by 19-7 major decision. Dont know much about Small but Downey looks big at 84 and good.

Harrington and Harris now. Early upper body attempt, but no scoring. Lots of handfighting now. Harrington double attempt late, but Harris nearly scoots behind. No points.Harris starts the 2nd down. Not a ton of action in the 1st.Harrington has a couple of returns and rides for 29 ticks before he is warned for stalling and kicks Harris. Not a whole lot of action, a lot of handfighting and no shots. Harrington gets in deep on a high crotch with :15 left but Harris is able to get out. Another stall warning on Harrington, and Harrington chooses neutral to begin the 3rd. Harrington goes double and switches off to a single and finishes! kicks him immediately and trails 3-2.Harrington trying a few shots but had no gas. Harrington tries a headlock at the end and gets it! Referee calls no takedown on the mat and this one will be reviewed. I have a feeling the call will stand but we will see. Call stands, Harris wins 3-2.

Lots of handfighting here early. Hall is a big tall heavyweight and Smith a short stockier heavyweight. Hall nearly gets an arm drag but not much action. Hall down to start the 2nd and is out in 2 seconds. Neither wrestler opening up much at all. Smith tries a high crotch and misses. handfighting continues on here. Smith will go down to begin the 3rd trailing 1-0. Smith out right away! Match now tied at 1. Hall tries a snatch single again and Smith get hits with his 2nd stalling. I mustve missed the 1st. Score is now 2-1 in favor of Hall.Smith has a couple late attempts that Hall is able to stuff. Hall wins 2-1 and ASU wins the dual 2-1.

Thanks for all those who followed along! Surely an interesting environment with gymnastics going on at the same time.