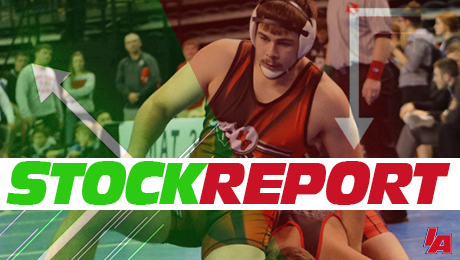 Drew Bennett (Fort Dodge)- Bennett has racked up a perfect 18-0 record on the young season including tournament titles at the Independence tournament and the Council Bluffs Classic. All the Dodger did to claim first place this past weekend was knock off defending state champ Kyle Biscoglia of Waukee in the finals by a 3-2 decision. Throw in a decisive 14-7 victory over one of the top 1A wrestlers in Cael Happel and Bennett finds himself off to a red hot start.

Taylor Lujan (Northern Iowa)- To be fair to Lujan, he should have make the stock report long before week 6. The Panthers 174lber has built a 12-1 record on the young season with his marquee win coming against Illinois #8 ranked Zac Brunson. His only loss came to #2 ranked Zach Epperly of Virginia Tech by a score of 9-7. Lujan has earned this spot not just from one good match but a solid first month of the season where he finds himself ranked #11 by the Intermat.

Iowa/Iowa State Rivalry- The definition of “Rivalry” is: competition for the same objective or for superiority in the same field. The series has been anything but competitive with Iowa winning the last 13 meetings now. The Cyclones last win came back in 2004. Paul Bradley was on Iowa’s team back then to put that into perspective. Wrestling needs this meet to be competitive especially in a series that holds the majority of the spots on the list of all-time most attended duals.

Michael Kemerer- This isn’t a death sentence for Kemerer, its merely pointing out he had one uncharacteristically bad match. If he rights the ship next time out then no harm done, but it does make you wonder what was going on with Michael Kemerer on Saturday night. He ended up winning his match 8-7 over Iowa State’s Colston DiBlasi, but he was also one more stall call away from being DQed. Is there a good chance Kemerer just wasn’t feeling well and this was just a one time deal? Of course. It just makes you hesitate a little bit from just penciling him in as a high All-American this year though until we see a bigger sample size.