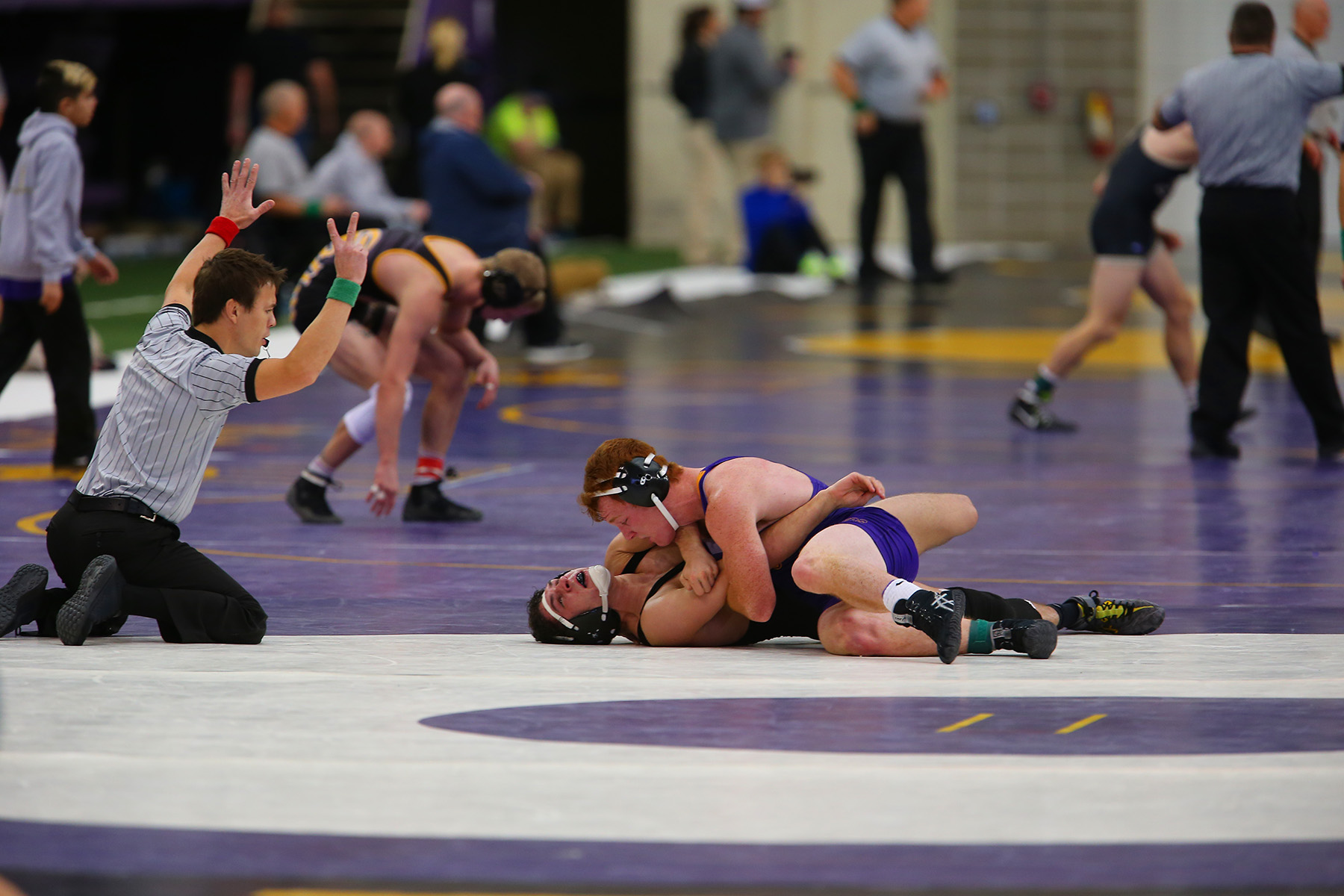 The University of Northern Iowa hosted their annual open tournament today and came away with two championships. The Panthers were led by freshman Max Thomsen, who posted two major decisions on his way to the 149 pound championship. Thomsen won 3-1 over Brock Ervin from Illinois in the final. Taylor Lujan won the championship match in an exciting battle with Illinois’ Zach Brunson, 13-10. Lujan recorded two pinfall wins right out of the gate, then defeated back to back Illinois wrestlers to take home first.

UNI had another finalist in Tyler Hoffman, who wrestled unattached in the tournament. Hoffman had a nice showing despite only wrestling three matches on the day. He started out with a tech fall win over Nolan Funk from SDSU, and then had a 7-5 decision over Joe Teague from ISU. Hoffman would then face the two-time NCAA Champion and Olympic Bronze Medal winner J’Den Cox in the final, and while he held Cox off for a little while, cox would win by pinfall in 5:19.

Drew Foster also took home second for UNI. The Panther was leading in the final against another Illinois wrestler, Emory Parker, before giving up the pinfall in 5:41. Foster had one pinfall win and two wins by decision on the day, including a nice 4-2 win over Chris Pfarr from Minnesota in the semifinal.

There were a number of wrestlers who wrestled for third as well, including Jacob Holschlag, Paden Moore, and Carter Isley. Holschlag was the only one of the bunch to take home the consolation championship, joining Foster in defeating Pfarr, 6-4. Holschlag lost on the frontside of the bracket to the eventual champ, Emory Parker. Moore dropped his 3rd place match to Evan Wick, 14-9, and Carter Isley lost to Austin Myers 6-0.

In non-Panther related results, Isaiah Martinez made his debut at 165 pounds, claiming first place. Martinez, who looked to be in trouble in the first period, defeated Missouri’s number three ranked Daniel Lewis, 7-4. Lewis nearly had Martinez down for a defensive fall, but the official stopped action before Lewis could really settle back to get Martinez on the mat.

J’Den Cox dominated his bracket the way you would expect him to do. Cox beat all three of his opponents by pinfall on way to the championship.

The University of Iowa sent their redshirt freshman and non-starters to the tournament as well. They were led by Carter Happle, who took home third place at 141 pounds, defeating Missouri’s Zach Synon 5-2. Synon is a two-time NCAA qualifier (at 133 pounds) and a MAC Champ, so that’s a solid win for Happle. The Hawks only had one other placewinner, Kaleb young at 165 pounds, and he took 4th.

The Hawkeyes and Cyclones face off next Saturday night at Carver-Hawkeye Arena in Iowa City. The Panthers are next in action next Sunday afternoon in Madison, Wisconsin. We’ll have previews up for both duals later in the week.