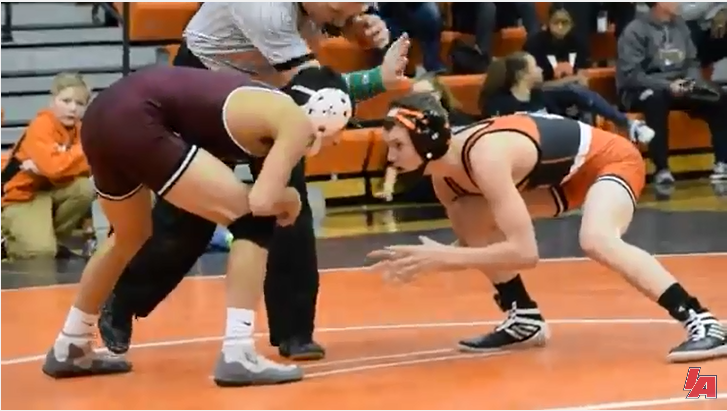 Refresh often for updates. Will be doing live play-by-play for the finals.

106: Nick Oldham (WDM Valley) vs. Cullan Schriever (Mason City)
1st: Here we go. No score 45 seconds in. Schriever in for the takedown and Oldham gets the escape 1:00 left. 2-1 Schriever with 50 seconds left. Oldham not able to get through Schrievers head hands defense 20 seconds left. Slick duck under Schriever and leads 4-1 to end 1st.

2nd: Schriever wants neutral. Schriever really working Oldhams head. 1:27 left still 4-1. Schriever almost gets around for the 2 but Oldham fights it off. Schriever controlling the match so far. Oldham shoots with 10 seconds left, Schriever almost around behind for the two, gets high and Oldham almost comes out behind but time runs out. Still 4-1 Schriever.

113: Jacob Schipper (North Scott) vs. Jakey Penrith (Cedar Falls)
1st: Underway at 113. Both wrestlers with some shots from space but not able to covert. Schipper in now has Penrith on his butt and gets the TD. Right into a tilt for 2 NF. Schipper leads 4-0. Schipper riding tough getting another tilt and leads 6-0 now with 20 seconds left. End of 1st 6-0 Schipper.

3rd: Schipper goes down to start 3rd. Stands up and out 12-0 now. Schipper in again for the TD leads 14-0 looking for another tilt. Theres the tilt for 2 more NF.

120: Riley Thomas (North Scott) vs. Dylan Albrecht (Waverly-Shell Rock)
1st: Thomas in on a single, cuts to a double but Albrecht fights it off and they go OB no score. 1:00 left. Stall warning on Albrecht. A lot of half shots by Thomas. We will end the 1st 0-0

126: Spencer Hutchinson (WDM Valley) vs. Gable Fox (Don Bosco)
1st: Here we go at 126. Hutch with a snap to a single for the TD he leads Fox 2-0. Fox out for the escape 2-1 Hutch. Hutchinson with an ankle pick but both wrestlers are scrambling now Fox gets the legs and locks up an inside cradle but they go OB. Fox leads 3-2 and is riding 45 seconds left. Fox riding tough has Hutch broken down working crossface. Period ends.

2nd: Hutch goes neutral to start second. Fox leads 3-2. Lots of hand fighting going on both wrestlers trying to move each other around. Russian tie for Hutchinson and drags the arm down for a TD Hutchinson leads 4-3. Fox with the stand up for an escape now tied 4-4 with 30 seconds left. Hutch hits a throw by to a single but we end the period in a scramble.

3rd: Fox chooses down. Hutchinson says lets go neutral. So Fox gets the escape and leads 5-4. Hutchinson in again on the leg. Fox almost locks up the tilt with his leg trapped but we have a stalemate with no change. Injury time for Hutch but appears to be ok. 1:15 left. Fox leads 5-4. Hutch in again but we have aother scramble. Hutch gets the TD and leads 6-5. Fox trying to come out behind for the reversal and he gets it. Fox holds on to Hutchinsons leg and time runs out.

132: Jake Watters (WDM Dowling) vs. Will Jefferson (Bettendorf)
1st: 1:10 left still no score. Watters gets the TD and leads 2-0. Watters has the arm trapped between the leg looking for a ball and chain. Nice switch for Jefferson but doesnt get the reversal still able to escape tho as period ends. 2-1 Watters

2nd: Jefferson Chooses down. Watters gets Jeffersons arm on his back trying to work the other arm underneath. Now back to the ball and chain for Watters. Got a 1 count but nothing more. Period ends 2-1 Watters.

3rd: Watters chooses down. Jefferson puts the leg in and rides tough. They go OB. Jefferson says he wants to go neutral. 3-1 Watters now. Jefferson in on a double Watters hips in and they go OB. Watters gets the TD and leads 5-1 with 50 seconds left. Jefferson to his feet but but Watters returns him. 12 seconds left on the restart. Thats how it will end.

2nd: Holschlag chooses down. Holschlag with the switch and we have another scramble. Wilson ends up having Holschlags leg elevated and he pushes him OB. Wilson gets hit for stalling in the process. Holschlag up and out on the restart. He leads 1-0. 1:00 left. Holschlag with a sweet outside single for the TD. 36 seconds left as they go OB. Holschlag rides out Wilson and get go to the 3rd 3-0 Holschlag.

2nd: Stotts will choose down to start 2nd. Hes up to his feet but Woodyard has him in a front headlock. Stotts backs out for his escape. 5-2 Stotts. Nice single leg by Stotts and he gets another TD then immediately cuts Woodyard. 7-3 Stotts. Blood time Woodyard. Back at it. Stotts snaps down Woodyard for the TD then cuts him but Stotts is back in for the TD again 11-4 as the 2nd ends.

3rd: Woodyard chooses down. Stotts rides for 20 seconds then cuts Woodyard. 11-5 Stotts with 1:20 left. Stotts almost has the leg cradle but just goes back behind for the TD. 13-5. Stotts cuts him again. and gets another TD. 15-6 final.

152: Austin Yant (Waverly-Shell Rock) vs. Joe Kelly (West Liberty)
1st: Yant shots from a distance and almost gets Kellys legs but they go OB. Nice slide by for Yant but they are in a whizzer scrambling. Yant gets the TD on the edge. Yant almost gets the power half but Kelly able to slip out and gets to his feet somehow for the escape. 2-1 Yant leads

2nd: Kelly chooses down to start 2nd. Yant tries to put a leg in the goes to a trap arm tilt. Gets a 1 count but Kelly able to belly out. Kelly almost out on the edge trying to hip down and break Yants lock on his leg but we have a stallmate. 2-1 Yant with 1:07 left. Yant riding tough with the leg in, has Kelly broke down flat. Kelly works his way up and almost gets out on the granby as time expires. 2-1 Yant.

3rd: Yant chooses down and Kelly cuts him after 15 seconds. Yant in on a single, gets the TD, and has Kelly turked getting a count. Yant switches to an inside cradle, its tight and theres the fall.

2nd: Shapiro chooses down to start 2nd. Gets to his feet, Wagenhoffer has the leg elevated. Shapiro funks him and gets a reversal. Shapiro leads 2-0 with 1:13 left. OB again with 1:02 left. Shapiro almost gets a suck back but Wagenhoffer rolls out. Shapiro with the legs in now and has Wagenhoffer flat. Stalling on Wagenhoffer.

170: Ben Sarasin (Cedar Rapids Kennedy) vs. Bryce Pilcher (Cedar Falls)
1st: Sarasin in on the legs and gets the TD. Trying to work that two on one and get it on Pilchers back. Now Sarasin snakes a leg in. Pilcher to his feet and Sarasin lets him go. 2-1 Sarasin.

2nd: Sarasin defers. Pilcher chooses down. Looking for a trap arm tilt but cant get it. Pilcher to his feet and Sarasin lets him got again score tied 2-2. Sarasin almost gets to the leg but Pilcher fights it off.

3rd: Sarasin chooses down. Up to his feet and theres the escape right to a double leg, hes trying to come around behind for his 2 and now he gets it. 5-2 Sarasin leads. Pilcher tries a granby but Sarasin almost stops him for nearfall. Pilcher able to get an escape to get within 2 but time runs out.

182: Tavian Rashed (Cedar Rapids Jefferson) vs. Beau Lombardi (WDM Valley)
1st: Lombardi has a single but gets off balance and Rashed grabs Lombardis leg now for the TD. Rashed has the legs in with Lombardi flat on his stomach. Stalemate with 20 left. End of period. 2-0 Rashed.

2nd: Rashed Chooses down. Rashed gets the reversal and trying to work a turk. Rashed gets both legs in again and has Lombardi flatten out on his stomach.

3rd: Lombardi chooses top and Rashed gets a reversal immediately. Rashed will draw a stall call. Lombardi gets to his feet and Rashed cuts him. 6-1 Rashed. Anther TD for Rashed and he cuts Lombardi again. He wants the major and he will get a TD as time runs out for the major.

195: Connor Corbin (WDM Valley) vs. Kaden Sauer (WDM Dowling)
1st: Not much doing 1:00 in. Stall warning on Sauer. Not much action in the 1st just mostly half shots.

2nd: Sauer chooses down to start the 2nd. Sauer is to his feet and out to take a 1-0 lead. Corbin taking the majority of the shots but not getting to Sauers legs. Throw by attempt from Sauer he gets the Hi-C, lifts Corbin and gets the TD. Sauer up 3-0 now. Corbin hits a stand up for the escape 30 seconds left. 3-1 Sauer end of 2nd.

3rd: Corbin chooses down to start the 3rd and he is out in 5 seconds. 3-2 now Sauer with 1:30 left. Sauer has been hit for stalling once remember. Sauer hit for stalling again so we are tied. Looks like we will have OT.

OT: A lot of collar ties in OT. 15 seconds left. Sauer gets a leg but cant finish. We go to the TB

TB #2: Corbin chooses down. Corbin up to his feet Sauer trying to stay behind but Corbin gets the 1 and we are tied again. Corbin gets to a leg and gets the TD as time runs out!

220: Wyatt Wriedt (North Scott) vs. Rocky Lombardi (WDM Valley)
1st: Wriedt in on the leg, Lombardi sprawls out and almost gets behind but we are neutral and thats how the period will end. 0-0

2nd: Lombardi chooses down. Up to his feet right away and out in 5 seconds. Lombardi leads 1-0. Lots of collar ties in these up weights working the throw bys and slide bys. End of 2nd 1-0 Lombardi

3rd: Wriedt chooses down. Lombardi lets Wriedt go right away. We are tied. We will have OT again.

OT: No score. We go to the tiebreakers

TB#2: Wriedt gets out and Lombardi is unable to get in and Wriedt takes it.

3rd: Hillegas chooses down. 1:30 left still 1-0 Bonner. Bonner gets hit for a stall warning 18 seconds left. Bonner rides him out.