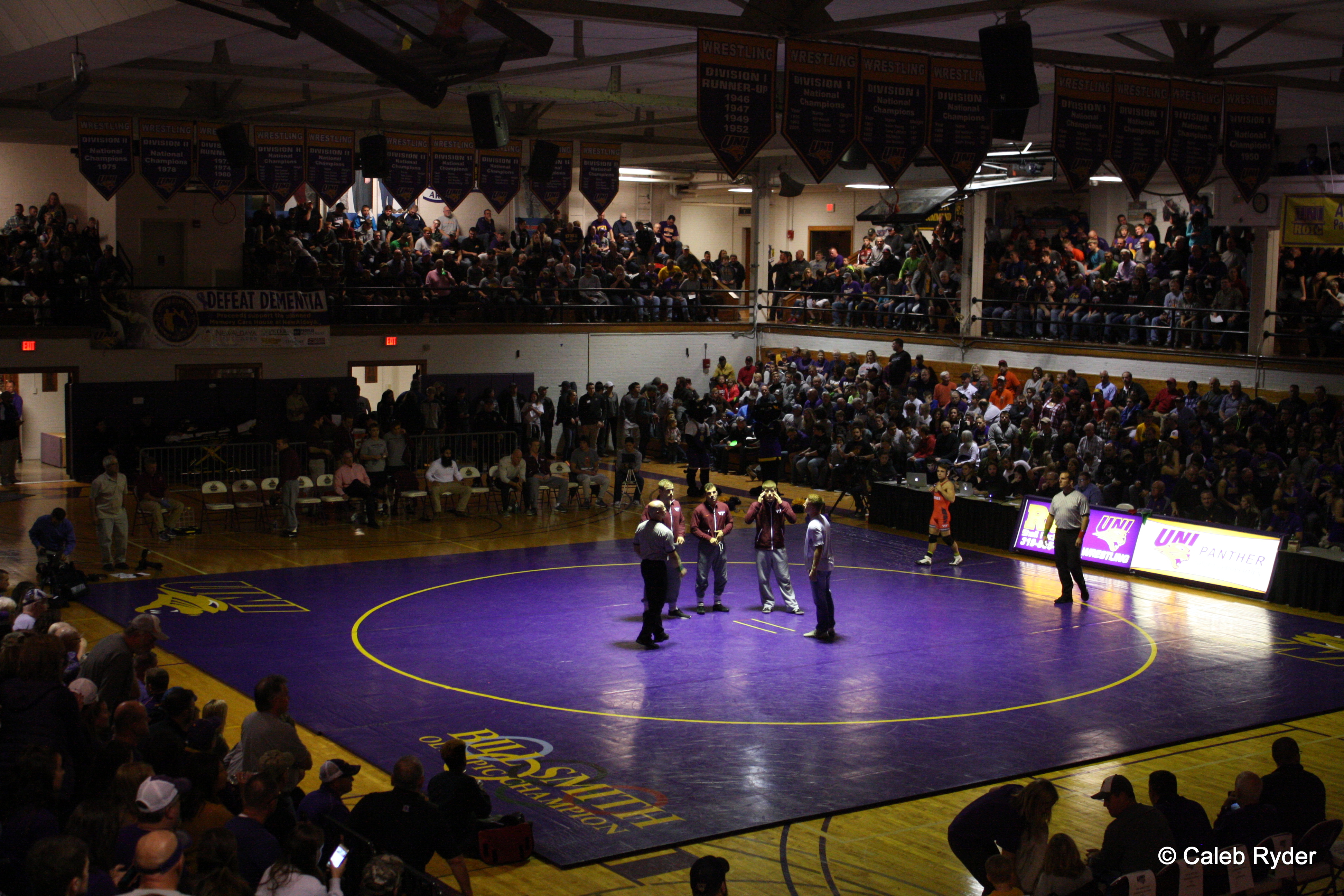 The Northern Iowa Panthers secured their first MAC Conference dual win of the season on Sunday afternoon, 29-9, over Old Dominion University. The dual was never in doubt, with the Monarchs only securing three takedowns total in the dual, and only one through the first seven matches.

Their were a couple of big upsets for the Panthers, with two unranked wrestlers taking down top-13 ranked men. At 165 pounds Bryce Steiert took the mat for the second time in his young career. Steiert looked like a bigger Dylan Peters against #13 Seldon Wright, going to one knee and darting in low when the opportunity presented itself. He had some great defensive stops too; at one point in the first he fought off a blast double by Wright that would have put the Monarch up early but instead really deterred him from taking many other shots the entire match. Steiert would hold on to a 3-2 lead to get his first win over a ranked opponent at 165 pounds.

The next upset came at 184, where Drew Foster took to the mat to take on #12 Jack Dechow, who seems like he’s been at ODU for 15 years now. Foster took to his offense right out of the gate, scoring a takedown early and never letting go of the lead. He had another T2 off of a single leg in the first period that was a really nice attack, and tough riding in the second led to a 6-1 upset win for Foster.

There were some Panther wins that were business as usual. Dylan Peters kicked the dual off win a pinfall win in 1:30 over ODU’s Steven Simpson. Peters nearly had the fall locked up about 30 seconds earlier, but the official said that both wrestlers were out of bounds. The Panther shook it off and hit a double leg for a takedown and worked Simpson over for the fall.

Josh Alber won 11-2 after some really tough riding wore out Alex Madrigal. Alber had over a minute of riding time in the first period, and then attacked Madrigal in the second period before putting two more takedowns on him in the third to get the major decision.

The Panther that I thought needed to win the most was Jake Hodges, especially after falling last week to Virginia Tech’s unranked Dennis Gustafson. He was in a battle though, as ODU’s Milio Saavedra wasn’t giving up anything, and after an early 2nd period escape by Hodges he led 1-0 going to the third.

That’s when the Panther put on a devastating ride. Saavedra tried to get up off the first whistle, but Hodges sucked him back and nearly got back points, but wasn’t quite there. Then on another restart Hodges did get the four point near fall, and that really broke the defending Midlands Champion. Saavedra couldn’t do anything else on bottom, and Hodges took home the 6-0 victory.

Max Thomsen won his match against Michael Hayes 11-3, Paden Moore won against Austin Eads 8-2, and and Taylor Lujan against Antonio Agee 10-5 to round out things for the Panthers. Only Jared Bartel lost, dropping a 6-0 decision to #7 Kevin Beazley. UNI forfeited at heavyweight, as JJ Everard is nursing an ankle injury.

The Panthers will next be in action next Saturday at the UNI Open, and rumor has it that Illinois and Missouri are both bringing their full squads. We’ll have a preview of that later in the week.