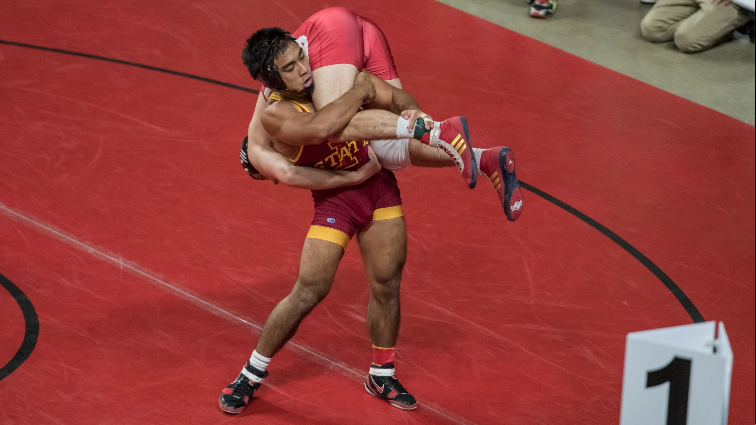 The dual is starting at 197 today.

1st: Grant working some front headlocks in the early going, Teague fights out of a couple. Minute left in the first. Grant with a  double attempt, but Teague able to avoid the shot, but gets backed out toward the edge. Able to stay in bounds and the period ends scoreless.

2nd: Teague is up and out for an early 1-0 lead in the period. Another shot from Grant and Teague able to block it off. Grant working a good pace and still no offensive attempts for Teague. Teague needs blood time. Second period ends with Teague up 1-0.

3rd: Grant got up to his feet right away, but Teague able to mat return, they go out to the edge of the mat and restart. Grant up to his feet again but Teague with a nice return. Teague gets over a minute, Grant with a late reversal, but Teague is able to escape, takes a lead with RT and wins.

1st: Smith makes his debut and is getting after it early with a single attempt, but Kuck able to fight out of it. Kuck does a leg slap, but no real offense attempt. Period is going to end scoreless with neither guy going to their offense.

2nd: Smith starts down and is up and out in a couple of seconds to take a 1-0 lead. Not very much action once Smith got to his feet. Lots of collar tying up. Smith takes a single leg attempt and scores a takedown and Kuck with a quick escape after giving up a takedown. Kuck takes a late attempt in the period, but not able to score.

3rd: Kuck starts down, tries to crawl away, but Smith follows and breaks him down to his belly and goes to work on the wrists of Kuck. Smith out on the side working to pull the wrist out. Kuck has been on his belly most of the period and is warned for stalling. Kuck crawls out and we get a restart. Smith breaks Kuck down right off the whistle. He has RT in his favor.

1st: The marquee match of the dual, both guys looking for angles early. Montoya looking for a two on one, Hall drops to a knee to take a shot, can’t clear the hands so no score. Hall having a hard time clearing the hands to get off a shot, Montoya not really generating a whole lot of offensive attempts on his end. Period ends scoreless.

2nd: Hall defers the choice, Montoya starts down. Montoya to his feet, tries to hit a roll and Hall is able to follow. Montoya looks like he has an escape, but the ref calls them out. Montoya to his feet on the restart and Hall with a good mat return to keep him down. Hall doing a good job of keeping Montoya down on the mat, Montoya warned for stalling. Another mat return for Hall on the edge, Hall has RT in his favor currently. Hall finishes the rideout. Match is still scoreless.

3rd: Hall with 2:00 RT and picks neutral to start the final period. Shot by Montoya, reshot by Hall no score. Montoya changing levels, but no attempt. Stall warning on Hall, but Hall able to get a takedown by pancaking Montoya and gets the win.

1st: Moreno working underhooks early. Moreno looking for some attempts but can’t clear the hands. Box takes a shot from space, but Moreno fends it off easily.  Moreno looking to change levels and for a single, but Box fights it off. Moreno is back in those underhooks and moving Box around. Box hits a knee pick and catches Moreno flat footed for a takedown. Morneo was able to get an escape with short time to cut it to 2-1.

2nd: Moreno able to get out early to tie the match, Box high crotch takedown against Moreno and traps the wrist for a 4NF count, Box up 8-2. Box has an arm bar and runs it taking Moreno over to his back, he’s tightening it up, gets his 4NF count, but Moreno able to belly out. 12-2 lead for Box.

3rd: Box chooses neutral. Moreno with double underhooks looking to go for a inside trip, but Box able to back out of bounds. Moreno back in with double unders on the restart, Box backs out of the hold and gets warned for stalling. Match ends.

1st: Straw makes his dual debut for the Cyclones. High crotch attempt for Straw and finishes for a takedown. Straw tough on top Polkowske unable to get out from him and they go out of bounds. Off the restart, Polkowske comes up to his hands and feet and able to get hand control and the escape. Straw with 1:16 of RT currently. Not a good shot by Polkowske, reshot by Straw. Now Polkowske starting to pick up the pace, Straw looked like he was going to get takedown on a slide by, Straw recovers and able to keep it no score as they go out, but it’s going to an official review. After the review no score. Nickerson warned after the refs video review.

2nd: Straw starts down, and hits a switch to pick up a reversal, Polkowske able to get out quickly and it’s a 4-2 lead for Straw. Polkowske has taken Straw’s RTing down under a minute. Polkowske tries the slide by again, but Straw able to keep it on his feet. period ends.

3rd: Polkowske takes neutral, double attempt by Straw for no score, Polkowske puts in double overhooks, but Straw fights out of it. Low single attempt that Straw finishes for his second takedown, gets RTing back in his favor and lets Polkowske up. Straw back in on the single and gets the takedown locks up a cradle, but they are stalemated on the edge of the mat. Reversal off a granby by Polkowske, Straw comes up to his feet but Polkowske returns him. Match ends

1st: Fate in on a single leg attempt, DiBlasi on his seat trying to work break the hold. DiBlasi now overtop of Fate, trying to break that hold and its stalemated. Fate with a snap, and is really controlling DiBlasi’s head and moving him around. DiBlasi warned for stalling, Fate with a couple attempts here trying to create action. Period ends scoreless.

2nd: DiBlasi starts down, trying to come up to his feet, Fate trying to put the leg in. Granby by DiBlasi and he gets a reversal out of it and is now riding Fate. DiBlasi, puts his leg in, DiBlasi working a powerhalf to try and get a cheap tilt, but Fate able to belly out. DiBlasi working a cradle and gives up his leg and is reversed, DiBlasi able to get back on top with another reversal, and it’s 4-2 lead for the Cyclone. Period ends.

3rd: Fate chooses neutral to start the final period, comes in  on a single attempt, DiBlasi trying to do a crotch left and its stalemated. Ankle shot for Fate, but is bellied out DiBlasi hit for stalling so point to Fate. The shot gets stalemated. Fate in on a shot and trying to split the legs for a takedown, DiBlasi able to hang on for the win.

1st: Torres in on a single right away and Dane working to fight out, Torres brings it up to his feet, Dane trying to break the hands, Torres now dragging Pestano back to the center, tries to trip and finish out of bounds and does not score. Both guys trading half shots, but neither able to get any penetration. Period ends scoreless.

2nd: Torres takes down up to his feet quickly and Pestano had to release him, 1-0 lead for Torres. Pestano takes another shot, but can’t clear the hands, no score. Torres with a shot attempt, Pestano looking to hit a go behind, but Torres fights to his feet for no score. Period ends 1-0 for Torres.

3rd: Pestano takes down, Torres puts in a half and is riding tough. Pestano tries a granby, but Torres bellies him out. Pestano works up and able to get a reversal off another roll, takes the lead, 2-1. Torres up to his feet, Pestano unable to mat return. Torrest trying to go for a body lock and throw Pestano and lands on his back, Pestano gets a takedown, but no back points. Pestano leads 4-2. Looks like KJ asking for a review on the back points. After the review, they still don’t award any back points. Off the restart, Torres able to get to his feet for an escape.  Torres coming and pushing the pace, Pestano trying to block off, but Torres able to trip Pestano up for a takedown and the win.

1st: Lelund in right away on a single and finishes for a takedown, releases Roberston. Roberston comes with a shot of his own and they are stalemated. Roberston takes a shot and Weatherspoon able to go behind for his score, up 4-1. Bellies Roberston out, buts the leg in and working for near fall. Lelund gets the turk and has the four count, looking for a fall, Roberston able to belly out. 4NF count for Lelund. 8-1 lead after one.

2nd: Lelund starts on top, sinks in a half, now he is trying to roll Roberston’s wrists. Lelund gets Roberston bellied out and now trying a leg turk, getting NF count. 4 NF for Lelund. Roberston now warned for stalling, Lelund trying to stick the leg back in. Lelund cuts Roberston, now Roberston in on a shot, Lelund able to sprawl back and the period ends.

3rd: Lelund starts the period down, Roberston puts his leg in. Roberston bellies Lelund out and has both legs in. Lelund warned for stalling. Stalemate is called, UNC coaches not happy with it, but we’ll get a fresh start. Lelund up to his feet, Roberston drops to a leg, Lelund trying to come around and gets a reversal. Match ends

1st: Attempt by Gabel, but unable to pass Powell’s leg, they are stalemated. Back on their feet, Gabel taking some shorts and Powell fighting them off, now Powell warned for stalling. Gabel coming with an attack and backs out of bounds and gives up a stall call. Powell now comes with a shot attempt, Gabel going for a crotch left, but able to come around the back for a takedown late in the period. 3-0 lead for Gabel.

2nd: Gabel starts the period down, gets to his feet, Powell switches to a double to return Gabel, They go out of bounds. Gabel up to his feet on the restart and gets his escape to lead 4-0 now. Not a lot of action to end the period.

3rd: Powell takes neutral in the final period. Shot Powell, reshot Gabel, no score. Gabel gets a single and gets a takedown with Powell bellied out. Gabel trying to work a leg turk. Powell shutting down, Gabel switching off looking to turn, but unable to.