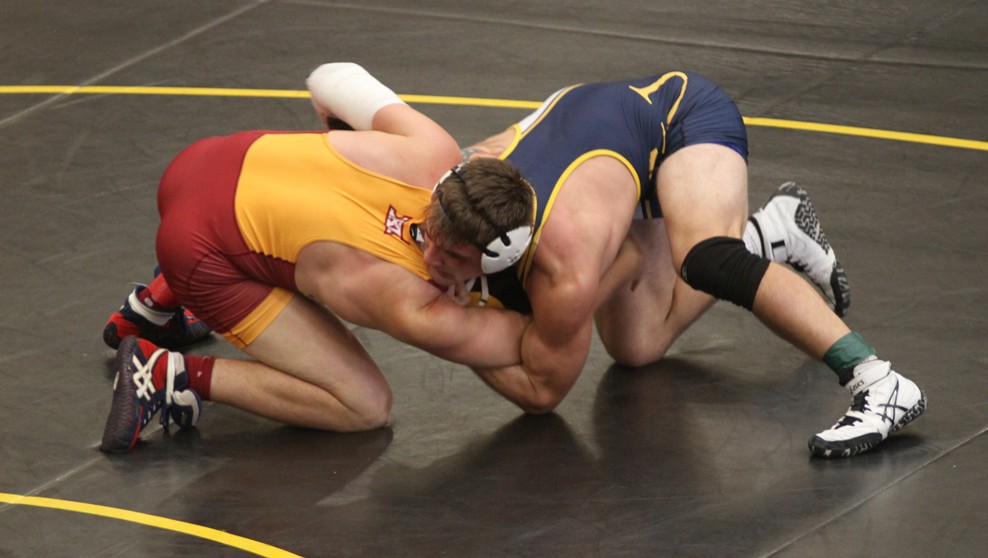 FOREST CITY, IA – The Graceland University wrestling team improved to 1-1 on the year, as the Yellowjackets defeated Waldorf College on the road, 30-19.

“I’m proud of these guys and their resiliency when matches weren’t necessarily going in their favor,” stated Zack Mullins, head coach. “Several guys stepped up when it mattered and it shows that this group has some fight in them. Hat off to Waldorf and the fight they displayed as well. We have some improvements to make moving forward, but I’m confident these guys will continue to work hard towards our goals this season.”

Kruz Adamson got the Yellowjackets off on the right foot as he won by decision (8-4) over Daniel Lin at 125 lbs. In the next two weight classes (133 and 142 lbs.), Dashiell Mann and Shea Swafford would be taken down by Fall (3:27 and 4:22, respectively). Waldorf took the lead 12-3 after three wrestlers.

Brandon Seward then picked up a win by forfeit as GU brought the score to 12-9 in favor of WU. Graceland battled throughout the next two weight classes (157 and 165 lbs.), but ultimately were edged out by their competitors. Coulter Allen (157) was defeated by Dario Gamino by a major decision (14-6) and Dakota Britt (165) fell to Austin Roys (Dec 9-5).

With the Warriors ahead 19-9, the Jackets sent Zach Kraus to compete against Dominick Fadden to compete in the 174 lb. weight class. Kraus took the match by Fall (1:23). Matthew Victor then picked up a victory by forfeit for GU at 184lbs., as Graceland moved ahead 21-19.

In the final two matches of the night, Ryan Paige (197) and Will Samuels earned victories to give Graceland the 30-19 win. Paige won over Joel Deere (Fall 4:44) and Will Samuels took down Dallas Knoop (Dec 10-8).