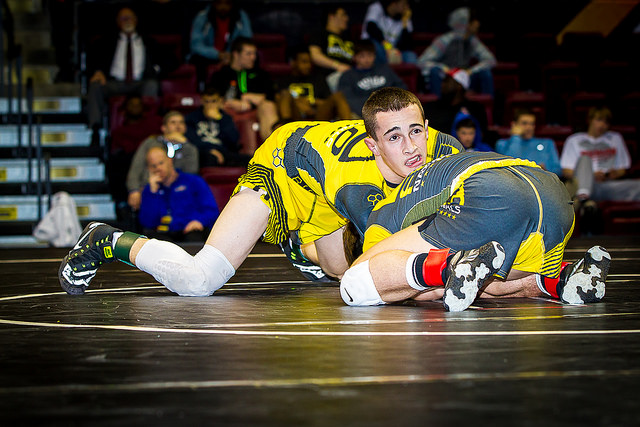 This week Akron, Ohio will play host to two very significant UWW events with the Cadet and University Nationals for both freestyle and Greco-Romam being contested. This year every wrestler that wins their bracket will earn their way onto a World team, with the Cadet World Championships this September in Georgia and the University World Championships competing in Turkey. The wrestlers will have to battle their way through their respective brackets, and then win a best-of-three finals to claim the spot.

Iowa has had it’s share of success at this tournament. In the 2014 year (then referred to as FILA Cadets) Iowa managed to place three wrestlers on to the Cadet World team, and had a fourth wrestler win a national title. That year Carter Happel made the freestyle team at 58 kg, while Drew West and Ethan Andersen represented the USA at 50 kg and 100 kg respectively in the Greco style.

While three world team members is a tall task to match, especially in a day and age where the international style of wrestling seems to be gaining more and more popularity, this year’s Iowa squad features enough talent to challenge that 2014 team.

Starting off in freestyle, the lightest weight features middle school sensation Cullan Schriever, who has won just about every major tournament in his young career and was a triple crown winner for USA wrestling in 2015. He will be joined by Elite Takedown wrestler Daniel Kimball at 42 kg who was the fifth place finisher at this weight last year.

Moving up to 46 kg, Eric Faught of the Sebolt Wrestling Academy, will have a tall task in front of him needing to go through 2015 World team member Malik Heinselman. Faught finished his freshman seasons for Clear Lake making the state finals while still being slightly undersized for the 106-pound weight. Faught has wrestled a majority of his freestyle season at 100 pounds, and will be a contender to win a Fargo title at that weight later this summer.

At 50 kg the biggest name from Iowa is the current #4 ranked 106-pound wrestler, Kyle Biscoglia. After missing the post season as a freshman, Biscoglia had a dominant sophomore season that saw him finish on the top of the 3A bracket. Biscoglia should be a force at this weight, taking sixth at 46 kg a year ago. This weight also features Elite Takedown’s Gable Fox and Trojan Wrestling’s Hans von Rabenau both of which have already put in solid off-seasons to this point. Nationally this weight features Dylan D’Emilio (a wrestler Biscoglia beat at Fargo last summer) who was the USA representative at 46 kg a year ago.

Michael Millage is the lone 54 kg wrestler from the state of Iowa and the two-time state finalist is slowly starting to build his national resume. After having his bid for four state titles ended last February, Millage shook that off and wound up putting in a second place finish at the prestigious FloNationals tournament a month later.

When talking about the top talent the state of Iowa has to offer, more often than not the name Alex Thomsen (58 kg) will come up and it’s not that hard to see why. Thomsen currently sports an undefeated high school career for Underwood high school, but has also seen plenty of success outside of Iowa. Prior to his sophomore season he added Fargo national runner-up and Super 32 medalist to his resume and is quickly ascending the weight class rankings.

The other two names from Iowa to watch at 58 kg are Nathan Lendt of Southeast Polk and Keaton Geerts of New Hampton/Elite Takedown. Both wrestlers placed top three earlier this off-season at Freestyle state, with Geerts claiming the 132-pound title over Triston Lara. Geerts has seen a bit of a meteoric rise over the last year, starting with his round of 12 finish at Fargo in 2015. Geerts also won the 2A state title at 132 pounds in February and finished fifth at FloNationals in March.

58 kg also features Hawkeye commit Jason Renteria, who has garnered many top finishes at various national tournaments. A double Fargo All-American a year ago, Renteria will technically be favored over Thomsen at this weight. Also entered at this weight are nationally ranked contenders Joseph Silva, Beau Bartlett (the nation’s top ranked incoming freshman), and Jack Davis.

At 69 kg we see the most famous name among Iowa entries, Nelson Brands from Eastern Iowa Wrestling Club. After a somewhat slow start to his high school career, Brands is starting to settle into his weight and his rode his single leg attacks to a state title, a regional freestyle title, etc and now he will try his hand for trying to make a World team. The biggest ranked name registered at this weight is Indiana prep Joe Lee. Last year’s runner-up and presumed favorite David Carr has not registered yet.

The next heavy hitters from the state of Iowa come at 76 kg, where a pair of Cadet Fargo All-Americans will try and make a World team. The top guy will be Marcus Coleman, who showed off his freestyle prowess last summer by taking second at Fargo. Coleman wasn’t the only Iowa middle-weight to All-America last summer, as Ben Sarasin was also able to bring home a top eight finish. This weight is considered to be “wide open” with most of the top performers from 2015 not returning .

The last big contender from the state of Iowa will be 85 kg wrestler Anthony Sherry, who has already placed four different times at the Fargo national tournament in his first two trips. Sherry has struggled to perform at the same level nationally in folkstyle that he has in freestyle or Greco, but he will be a legitimate dual threat this weekend.

Over the past few years Iowa has been fairly successful at producing Cadet upper-weights and Guy Snow is riding a lot of momentum coming into this weekend. Snow was able to finish second in both freestyle and Greco-Roman at the Southeast Regional tournament last weekend. His weight features returning World Champion Gable Steveson.

The Greco side of things get a little more challenging to preview, mainly due to the fact of a lack of coverage/knowledge with freestyle results factored into rankings more heavily. As noted above, Sherry should be a dual threat and its possible to say that he has probably been more successful in Greco than he has been in freestyle out at Fargo. A lot of that is based on his runner-up performance as a freshman, but Sherry looks to be in his element when he switches over to FRECO.

Alex Thomsen will be another big gun to watch at in this style, and he too is coming off a double AA Fargo performance in 2015. Thomsen even spent two weeks out in Colorado getting in some work with the Junior Greco-Roman team camp, which may translate into him being a true contender for World spots in both styles.

Nelson Brands should be interesting to watch, and not due to his family history. So far this off-season Brands was able to place at the Junior U.S. Open and the Western and Southeast Regional tournaments in Greco. Brands has plenty of potential, and it seems that more and more he has been able to string together several good matches in a row, which in turn creates great performances.