Every Second Matters on Day Two 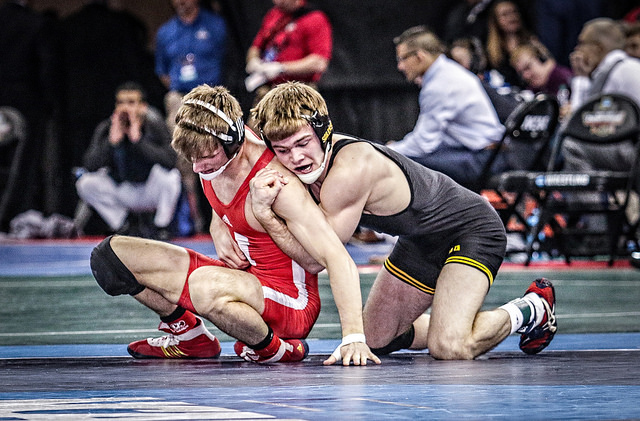 University of Iowa wrestlers would need all the time they could get on Friday at the NCAA national tournament in New York City.

Four Iowa wrestlers won their quarterfinal bouts and advanced to the semifinals, earning All-American status and a guaranteed spot on the podium Saturday night.

Tomasello would slow Gilman down sending the match to overtime, tied 1-1. In overtime, Gilman caught Tomasello on his back in a scramble for near fall points and an eventual fall, knocking off the former 125 pound national champion.

Peters would record two falls Friday night including a pin over Josh Rodriguez of North Dakota St in the blood round to earn his second medal in his collegiate career at UNI. Peters is the Panthers only All-American.

It was a Big 10 finals rematch at 133 pounds between Clark and Illinois No. 3 Zane Richards, who Clark defeated to claim the Big 10 title.

Trailing 2-3 with 10 seconds remaining, Clark pushed the pace and took down Richards on the edge of the match to win the semifinal bout, 4-3. For the second straight year, Clark will wrestle in the 133 pound national final.

At 149 pounds, Sorensen wrestled Oklahoma State’s Anthony Collica, who upset No.3 Lavion Mayes of Missouri to reach the semifinals. Sorenson defeated Collica at Grapple on the Gridiron in November.

Sorensen would once again defeat Collica, 4-2, thanks to a takedown and over two minutes of riding time.

McIntosh would spoil the Hawkeyes perfect semifinal round, defeating Burak, 4-2.

Sammy Brooks was the lone Hawkeye to lose his quarterfinals bout. Nebraska’s Tim Dudley would get revenge from the Big 10 tournament, defeating Brooks, 9-6 at 184 pounds.

Brooks would battle back on the consolation side, winning 13-7 in the blood round to become Iowa’s sixth All-American. Brooks however would lose his following match and will wrestle for seventh place at 184 pounds.

Despite losing his first match of the tournament, 174-pounder Alex Meyer battled all the way back to become an All-American. Meyer was beat in the consolation round five. He will wrestle tomorrow for seventh place at 174 pounds.

The Hawkeyes 157-pounder Edwin Cooper was pinned in his first match Friday, knocking him out of the tournament.

Lelund Weatherspoon entered the national tournament unseeded but will is guaranteed to leave with a medal after defeating Ohio’s Cody Walters, 5-3. Weatherspoon was the only unseeded wrestler in the entire tournament to reach the semifinals.

The clock would strike midnight for the Weatherspoon in his semifinal match against Ohio States No.11 Miles Martin. Martin defeated Weatherspoon, 8-2.

Iowa State’s three other wrestlers (Earl Hall-133, Tanner Weatherman-165, and Pat Downey-197) were all defeated in their quarterfinal bouts.

Hall and Downey won their blood round matches. Weatherman was defeated by Virginia Tech’s David McFadden, 6-2. The Cyclones have three All-Americans.

Iowa’s six All-Americans and three finalist puts them in third place with 77.5 points. Iowa State is currently fourteenth place thanks to their four All-Americans.

Dylan Peters two falls moved the Panthers to 23rd. Peters is responsible for 13 of the UNI’s 17.5 points.