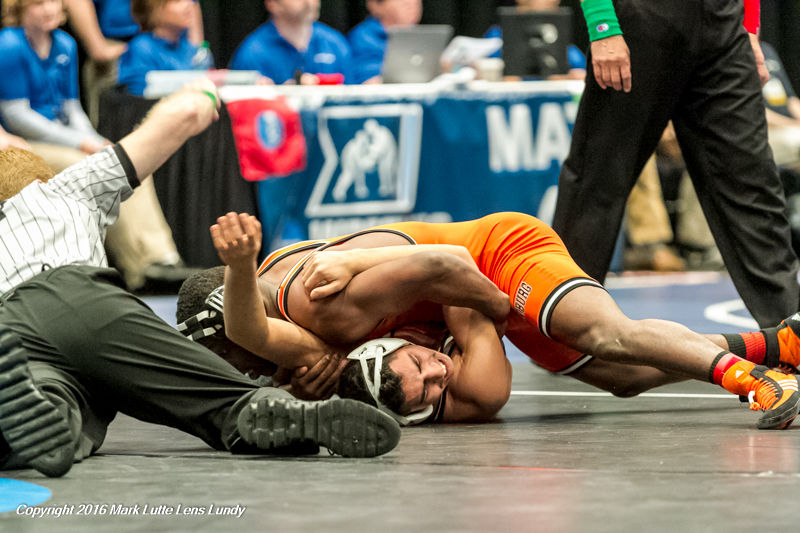 Wartburg takes a commanding lead into the semifinals

The Wartburg Knights came in to the NCAA tournament the favorite to win the title, but I’m not sure anybody expected it to be as lopsided as it was going into the third session.

The Knights hold a 37 point lead over the second place team, Messiah College, and placed seven of seven possible wrestlers in the semifinals. They also have two men still alive on the backside of their brackets (one through the bloodround, one through his first consolation match).

Wartburg was led by just about everybody, but defending National Champion Kenneth Martin scored a big 6-3 win over Augsburg’s Rashad Kennedy to get one step closer to defending his title at 149 pounds

In addition to the heavyweights 133 pounder Connor Campo won his bloodround match 3-2 to advance, and 184 pounder Bryan Levsen won his first consolation match 13-0.

Luther leads the rest of the Iowa schools, with 28.5 points and two semifinalists. 141 pounder Drew Van Anrooy won his match with Jeremy Broder from Mt. Union 7-5, and 157 pounder Tristan Zurfluh won 4-3 in the first tiebreaker to advance. The Norse saw 149 pounder Dakota Gray and 184 pounder Justin Kreiter fall in their semifinal matches. Gray came back with a 6-3 win in the bloodhound to become an All-American.

Coe is the next-highest Iowa school, placing two in the quarterfinals and advancing 174 pounder Ryan Harrington to the semifinals. 125 pounder Jan Rosenberg lost by pinfall in his quarterfinal match. Last year’s NCAA champion Farai Sewera won both his consolation matches to advance on his quest for third place.

Central College placed one in the semifinal at 125 pounds, where CJ Pestano won in sudden victory over Bobby Jordan. The Dutch have three wrestlers still alive.

Cornell College also put one man in the semifinals, where Trevor Engle won 10-0 at 149 pounds.

Below are the team scores through the second round of the 165 pound wrestle backs. We’ll get the final session team scores updated as soon as possible.