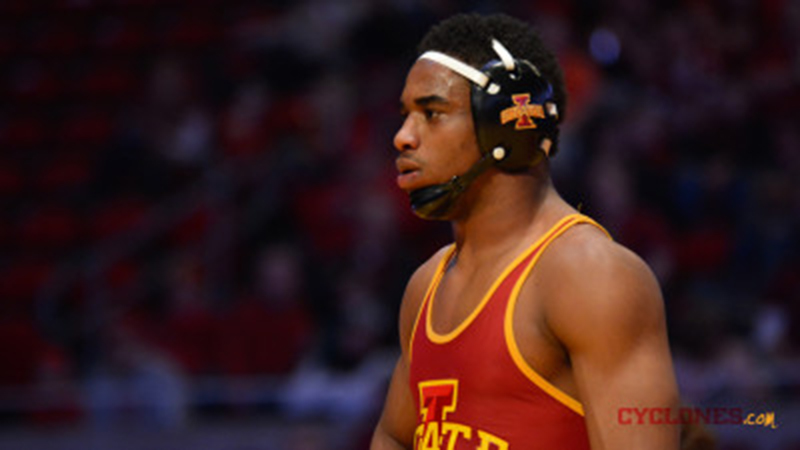 It was a new feel to the Big 12 Championships as the conference not only added an additional six teams with the Western Wrestling conference merger, but the tournament was also moved to a neutral location, with this year’s championships held in Kanas City, Missouri.

It was there that the Cyclones earned one Big 12 champion, and an additional seven medalists on the way to their third place team finish, garnering 87 points. Oklahoma State set a Big 12 record with 161 team points, and Oklahoma took second with an even 100 points.

The man of the hour was none other than Lelund Weatherspoon, who captured his second career Big 12 title, and first at 174 pounds. Weatherspoon needed two big wins on the weekend to claim his title, with the junior first knocking off the bracket’s only ranked wrestler #19 Matt Reed (Oklahoma), 3-1 SV in the semifinals. Weatherspoon would go on to win an exciting finals match with Oklahoma State’s Chandler Rodgers, 8-5.

The Cyclones had two more finalists on the day, as both Earl Hall (133) and Tanner Weatherman (165) faced the task of going up against returning NCAA champions at their respective weights. Hall fell to Oklahoma’s Cody Brewer 12-7 after scoring the match’s opening takedown, and Weatherman fell to Oklahoma State’s Alex Dieringer in a tight 4-2 battle.

The three finalist assured their status as NCAA qualifiers with each wrestler earning an automatic bid to New York City on March 17-19. Joining them will be Kyle Larson, who took fifth at 125, and Patrick Downey, who took third at 197.

Sophomore Dane Pestano finished one win short of earning an automatic berth to the NCAA championships, taking fourth at 184 pounds. With only the top three advancing, Pestano will need to receive an at-large bid to wrestle in New York.

Also finishing sixth for the Cyclones was Logan Breitenbach and Joe Scanlan who wrestled at 157 and 285 respectively.