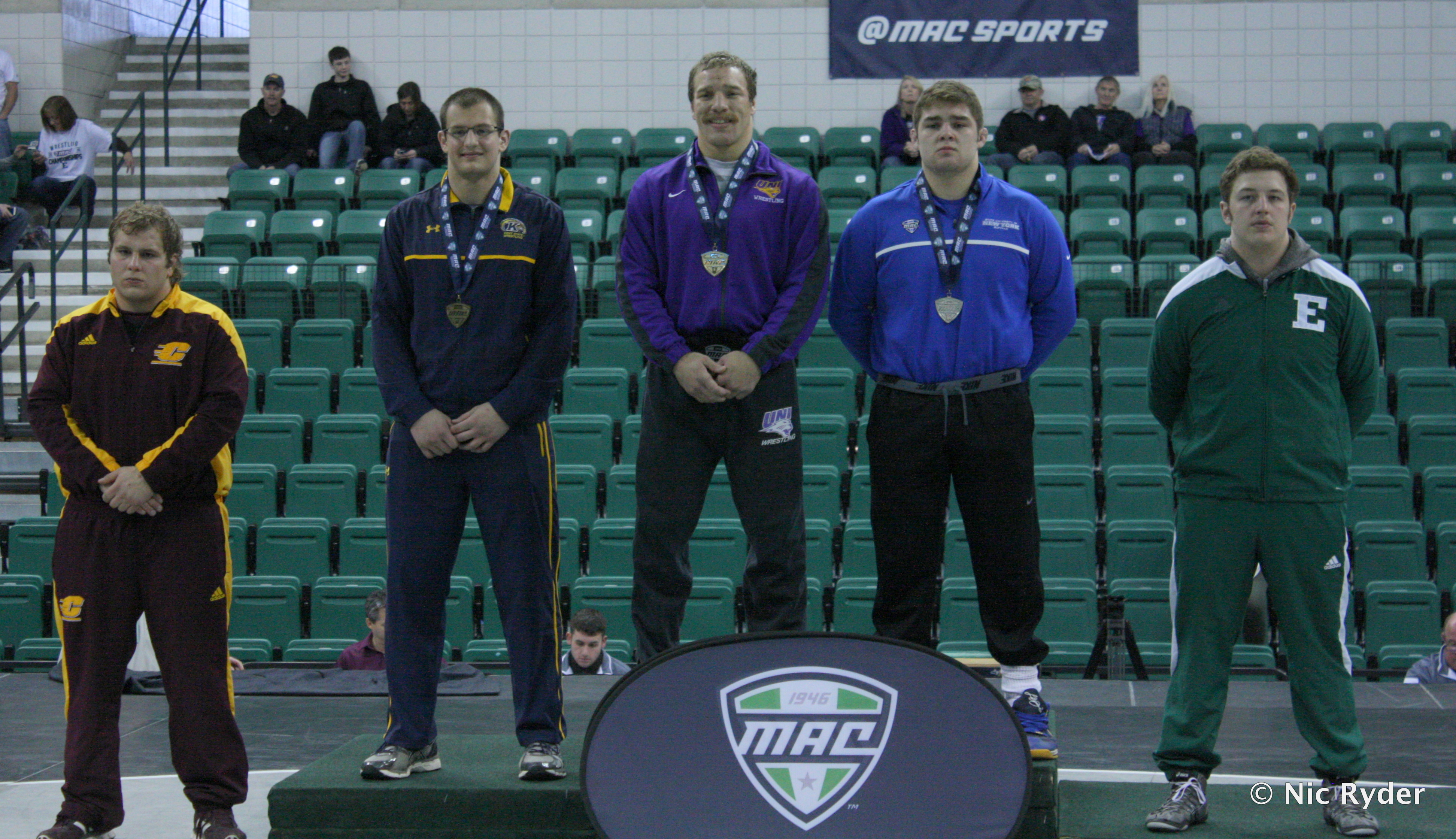 The Panthers had six wrestlers in the medal matches at the MAC Tournament Sunday and walked away with one championship and two runners-up. They were led by their heavyweight, who took first for the first time in his career, wrapping up an undefeated MAC Conference regular season and tournament. Dylan Peters and Bryce Steiert were the 2nd place finishers, while Cooper Moore took home third.

Blaize Cabell took home first place at the tournament for the first time in his career against Buffalo’s Jake Gunning. After a scoreless first period Cabell was able to push the pace and score a takedown on Gunning about halfway through the period, tying the match after the escape by Gunning.

Cabell kept his pace up and forced a stall warning against Gunning. In the third period Cabell chose to go underneath the Buffalo and eventually scored the escape point going ahead in the match. Cabell actually fell behind 4-3 after Gunning was able to score a takedown of his own, but as soon as Cabell got out he was in on the attack and then got a takedown of his own three seconds later to secure the win. Cabell won the match 6-5 after Gunning’s final escape point.

The number one seed at 125 pounds in Dylan Peters took on the number two seed from Missouri in Barlow McGhee. McGhee was able to hit four blast doubles for takedowns, and Peters was unable to get a shot off the entire match. McGhee took the championship 9-5.

Bryce Steiert made the championship for the first time in his young career against Missouri’s LeRoy Barnes. The true freshman was hit for a penalty point early in the match for an illegal headlock, and then was taken down later in the first period. He would make a comeback though, scoring a takedown midway through the second, then seemingly another at the end of the period, but it was disallowed after video review. Steiert took the bottom position to start the third period, but was ridden for most of the period and he gave up a four point nearfall. The Panther dropped the match 10-2 to take second in the conference, and secure his place at the NCAA tournament.

Trevor Jauch was the first of two Panthers to wrestle back for 5th place, taking on Ohio University’s Noah Forrider. Jauch hit a go-by in the early second, then ran an arm over to take Forrider to his back for the pinfall win in just 40 seconds. Jauch did not have a true 4th place match because he had already lost to both NIU’s Steve Bleise (3rd place) and CMU’s Zach Horan (4th place) earlier in the tournament.

At 165 pounds Cooper Moore took the mat for the consolation finals against Ohio’s Austin Resse. After a scoreless first period, Moore used a takedown in the second and a great rideout to end the second period up 2-1. Moore would score a reversal in the third period after starting down to win the match 4-1. The two-time MAC champion took 3rd place and will wrestle in the NCAA tournament later this month.

Drew Foster had a really nice match for 5th, winning 5-2 over Andrew Romanchik. Foster used some great single-leg defense against some first period shots by Romanchik, and scored a takedown on a go-by in the second period to take a 2-1 lead. After going down in the third he got up and out and scored another takedown with 30 seconds left to secure the win. Because ODU’s Joe Ariola lost to Missouri’s WIllie Miklus in the third place match, Foster would wrestle Ariola for a true 4th place and a spot at the NCAA tournament.

That match went to sudden victory tied 1-1 after the first three periods. Both men were a little nervous to commit to a shot, and Ariola would ride Foster out, and then scored an escape point when he was on bottom. Foster couldn’t finish on a final single leg attempt, and would lose 2-1.

Team-wise Missouri ran away with the team title, with 127.5 points to Central Michigan’s 93.5. The Tigers won five championships, and had one runner-up in Matt Manley, who forfeited at 141 pounds due to injury. The Panthers finished the tournament in 5th, just 1.5 points away from Kent State. The complete team standings can be found below, as well as a link for the Trackwrestling results.