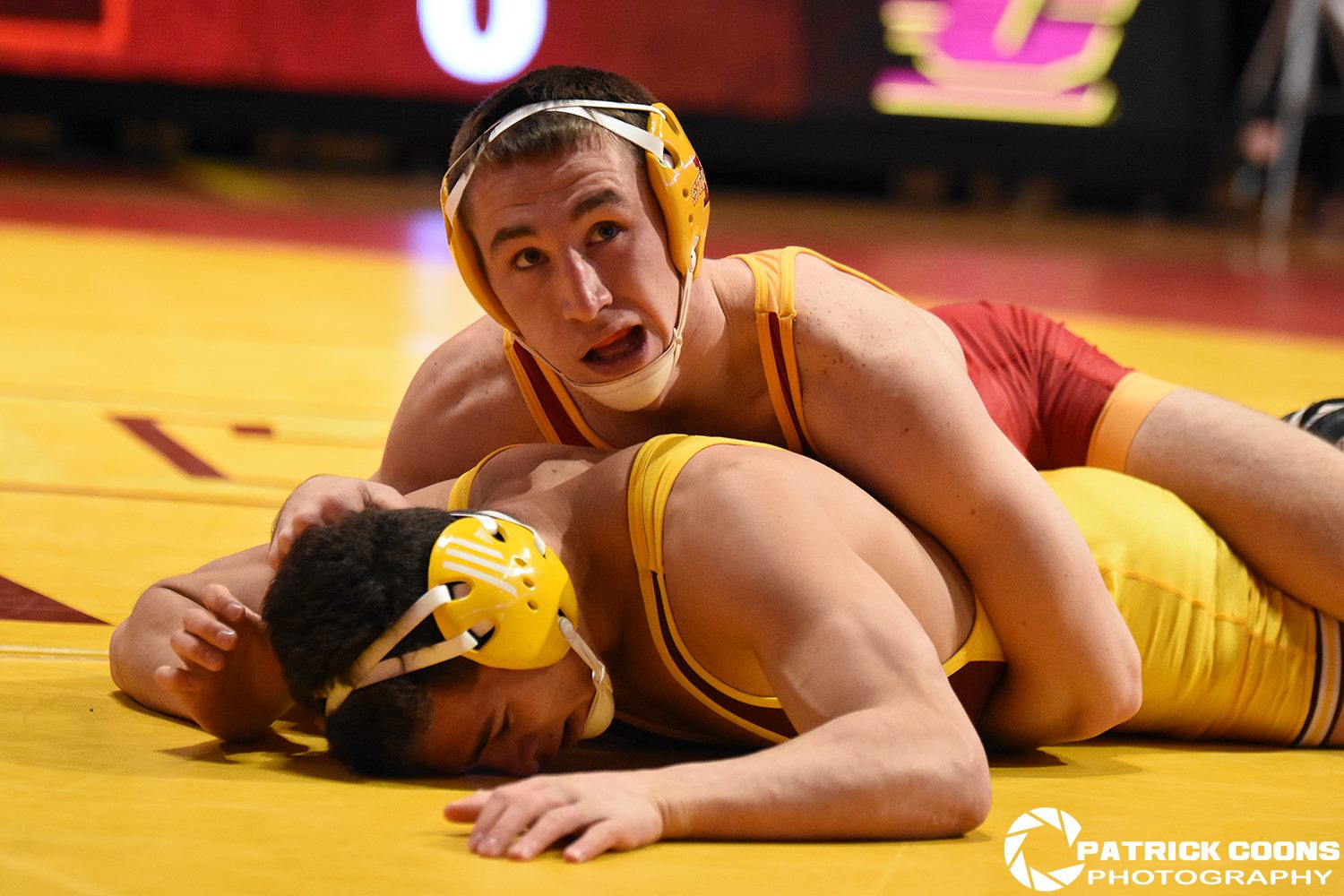 The 2016 Big 12 tournament marks the 1st year with a 10 team big 12 tournament with the addition of Wyoming, Utah Valley, North Dakota State, Air Force, Wyoming, South Dakota State and Northern Colorado. The addition of the teams should give the tournament a better NCAA simulation with a 2 day weigh in and help wrestling at smaller schools become more established. The Big 12 Conference has already established 37 established automatic qualifiers for the NCAA tournament based on RPI, coaches ranking and winning percentage over D1 competition. Iowa State earned 4 of those spots behind the likes of Earl Hall, Tanner Weatherman, Lelund Weatherspoon and Dane Pestano. The 4 wrestlers are likely to qualify for nationals regardless of their Big 12 placement; pending any major conference upsets at the weight across the board. Kyle Larson and Quean Smith were just on the fray of earning auto qualifying spots and would be likely candidates for an at large selection pending that they did not “steal” a spot at the Big 12 tournament. At 141, 149, 157 and 197 pounds; Cyclone Grapplers would likely have to “steal” a spot to nationals. For instance at 197 pounds the Big 12 has 4 automatic qualifier spots; thus a wrestler placing in the top 4 there would guarantee his spot at nationals.

125: Kyle Larson comes into the tournament needing to steal a spot to likely garner his way to the national tournament. Larson will likely grab the 6 or 7 seed; and will need to place in the top 6 to steal an automatic qualifier spot. Larson was on the bubble of earning an automatic qualifier. Rumors are that Zeke Moisey will weigh in and not wrestle; thus giving Larson a good opportunity. Moisey appeared to dislocate his elbow in the dual with Larson earlier in February. The Big 12 will preview 5 ranked wrestlers; including returning All Americans Eddie Klimara and Zeke Moisey. Ryan Milhof is a serious contender and has been red hot as of late; defeating Klimara for the first time and defeating multiple ranked wrestlers.

133: Earl Hall earned an automatic qualifier position for the Big 12 and comes into the tournament coming off an undefeated February. Hall hasn’t been defeated since he placed 7th at the Midlands championships back in December. He garners a 7th ranking and will look for his 2nd All-American finish this March. Hall placed 2nd at last seasons Big 12 championship and will have his work cut out with returning national champion Cody Brewer. Brewer’s only losses this season came at the hands of #1 ranked Nashon Garrett and to true freshman redshirt Kaid Brock of Oklahoma State. On paper it should be a Hall- Brewer part 5 matchup. Oklahoma States Gary Wayne Harding has consistently been a threat; losing a narrow 7-6 decision to Hall earlier in their dual. He and returning NCAA qualifier Jade Rauser, Josh Martinez and Twin River Valley (Iowa native) Brance Simms will likely be in a dogfight for 3rd.

141: Iowa State will send out redshirt freshman Nathan Boston. Boston is up 2 weight classes from his spot for much of the season at 125 pounds. Dean Heil will be the heavy favorite here; who has been rock solid with only one loss on the season. Chasing him will be Wyoming’s Bryce Meredith; who offers a funky and unorthodox style with lots of ankle rolls. Boston has been a hammer on top against all competition but struggles underneath giving up such a vast size difference. Boston will more than likely need to place in the top 3 to earn a spot into the NCAA championships.

149: It is uncertain whether the Cyclones will throw out former 141-pound starter Dante Rodriguez or Blayne Briceno. Both have seen considerable time this year at the weight class after Gabe Moreno’s season ending injury. Both will have their work out for them, as there are only 3 estimated spots in the automatic qualifier. Returning Ncaa round of 12 wrestlers Anthony Collica leads the field; followed by Alex Kocer of SDSU and Davion Jeffries of Oklahoma. Collica will be the heavy favorite.

157: Iowa State will send out Logan Breitenbach or Renaldo Rodriguez-Spencer at the weight class. Both have flip flopped the position back and forth with neither wrestler claiming the spot. The weight class will feature 3 automatic qualifier spots in Joe Smith of Oklahoma State, Cody Pack of South Dakota State and Dylan Cottrell of West Virginia. Smith and Pack should be set for a super final bout. Smith has been outstanding in his true freshman break out season; only giving up 3 defeats at the hands of top 5 wrestlers.

165: The Cyclones enter their other starting senior in Tanner Weatherman. Weatherman will have his work cut out for him with 2x NCAA champion and 3x Big 12 champion Alex Dieringer. Weatherman has placed 2nd at the Big 12 tournament twice and 3rd behind the epic Chris Perry vs. Andrew Howe bout. Also in the field will be NCAA qualifier Clark Glass. The 3 should all earn auto qualifiers and are heavy favorites in the weight class.

174: The big news coming out of Stillwater this week was that returning All American Kyle Crutchmer would be lost for the season with a foot injury suffered in the Bedlam dual. Fortunately for the Cowboys; they have another candidate for 174 who is not much of a step down at all. Chandler Rogers has stepped in multiple times for the Cowboys; with huge wins over his teammate Crutchmer and #2 Ethan Ramos. Rodgers is extremely dangerous and goes for broke from all positions. Rodgers will more than likely gather the #1 still despite missing much of the season; and should still earn an automatic qualifier position. This weight class should be one of the more interesting weight classes on the day; as 5 spots should be up for grabs. Ben Stroh (Wyoming), Matt Reed (Oklahoma), David Kocer (SDSU), and Iowa State junior Lelund Weatherspoon should all fight for seeds 2-5. All 4 wrestlers have bounced around in the 10-20 range. Weatherspoon defeated Stroh back in December and owns a victory over Kocer. Reed likely grabs the 2 seed here with head to head victories over Weatherspoon, Stroh and Kocer. Kocer and Stroh have not met but have significant victories over ranked opponents throughout the season.

*#8 Kyle Crutchmer is not wrestling; Chandler Rogers would most certainly be ranked

184: Big news came out of Ames when the Cyclones announced that Dane Pestano would maintain his spot at 184 pounds for the Cyclones. Pat Downey had won wrestle offs at 184 pounds but elected to move up to 197 pounds after winning wrestle offs up a weight additionally. The move makes sense for the Cyclones as Pestano would be an automatic qualifier and is more than likely going to nationals regardless of his big 12 placement; where as Downey and Harrington aren’t sure things. The weight class will be featured by returning AA Hayden Zilmer and Nolan Boyd of Oklahoma State. Boyd has been on fire as of late with dominating wins over last years national champion Gabe Dean and returning All American Willie Miklus. Zilmer and Boyd should be set for an electric finals match; with Cyclone Dane Pestano and Andrew Dixon of Oklahoma fighting it out for 3rd.

197: The 197 pound weight class is one that should be interesting for a multitude of reasons. #8 Jake Smith of West Virginia has quietly put together a dominant season; and the weight class should have 4 automatic qualifiers. That opens the door wide open for Iowa States Patrick Downey. Downey is just 2-1 in competitions this season for the Cyclones; but the Cyclone is a freestyle expert who owns victories over the likes of Quentin Wright and Tyler Caldwell. Downey should have a good shot at stealing an Auto-Spot from the Big 12 wrestlers who earned automatic qualifications (Jake Smith WVU, Trent Noon NCU, Preston Weigel OSU, Nate Rotert SDSU). Downey has phenomenal upper body skills that have yet to be put on display; and this weekend should be a good gage for things to come.

285: Questions remain over the health of Quean Smith after he was unable to wrestle at Minnesota last Friday after suffering a concussion warming up. That leaves the option of 197 pounder Marcus Harrington moving up; or backups Tyler Swope and Joe Scanlan. Hopefully for Smiths sake he will be able to wrestle as he was not far away from earning an auto qualifier for the conference. The heavyweight weight class will feature 3 automatic qualifiers in OSU’s Austin Marsden, OU (and Ballard Bomber) Ross Larson and Tanner Harms of Wyoming. Marsden will be the heavy favorite this weekend; but Larson owns a victory over Marsden in his career. Smith dropped a tight 3-1 decision to Harms earlier in December and will likely need to turn around that match to qualify for nationals.