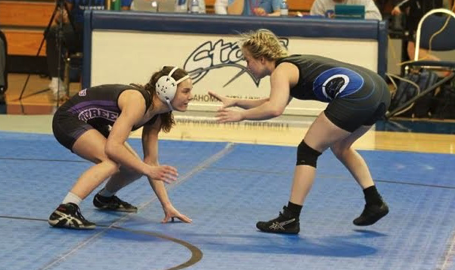 It has been a phenomenal wrestling season for our Iowa women with many great accomplishments to be proud of. We saw a record number of female participants at the high school level. There were history making performances in the regular season and sectionals, and several of our collegiate athletes earned and held top 10 national rankings for the entire year. Our wrestlers had a great year and we can be proud of what our state is able to generate in talent, work ethic, and success.

There were five wrestlers in collegiate programs from Iowa, as well as Iowa’s own Waldorf College (Forest City) who traveled to Oklahoma City to compete in the WCWA Nationals Friday and Saturday. The WCWA Nationals determines National Champions and All-Americans at the collegiate level and a top 3 finish in each weight class qualifies the wrestlers to participate in the U.S. Olympic Team Trials, April 8-10 in Iowa City.

Megan Black of Batavia, ranked #5 at 123 pounds in the WCWA rankings (February 8th), went 4-1 wrestling for McKendree University (Lebanon, IL). Black opened the tournament with a 1:36 pin over Lacey Henderson of Ottawa University (Ottawa, KS), followed by a pair of 10-0 tech falls over Joselyn Pacheco of Jamestown University (Jamestown, ND), and De ‘Anna Prince of Wayland Baptist (Plainview, TX). In the semifinals, Black picked up a 12-2 tech fall over #8 ranked Cassidy Jasperson of Oklahoma City University (OCU), but lost a 2-10 decision in the finals to #1 ranked Becka Leathers of OCU. Black ended the weekend as a runner-up National Champion, an All-American, and a qualifier for the U.S. Olympic Team Trials in April. Black is now a 2-time All-American with two remaining years of eligibility. Black ends the 2015-2016 regular season with a 17-5 record.

Anna Poyner of New Hartford, went 0-2 for the weekend at 123 pounds wrestling for Missouri Valley College (Marshall, MO). Poyner started with a 0-10 tech fall loss to Marizza Birruetta of OCU followed by a loss by fall to Caitlyn Kaz of Jamestown University. Poyner ends the 2015-2016 regular season with a 21-18 record and has two years of eligibility remaining.

Jasmine Bailey of Iowa City, ranked #6 at 136 pounds in the WCWA rankings (February 8th), went 2-2 for the weekend wrestling for McKendree University. Bailey opened the tournament with a 10-0 tech fall over Rebecca Johnson of Midland University (Fremont, NE), followed by a 7-5 win over #10 ranked Alyssa Batiste of Lyon College (Batesville, AR). Bailey faced #1 ranked Hannah Jewell of King University (Bristol, TN) in the quarterfinals where she lost by 2-12 tech fall followed by a 5-8 loss to #8 ranked Sarah Bollinger of Missouri Baptist University (St. Louis, MO). Bailey was a 2015 All-American and ends the 2015-2016 regular season with an 18-7 record and two years of remaining eligibility.

Cassy Herkelman of Cedar Falls, ranked #7 at 136 pounds in the WCWA rankings (February 8th), went 4-2 for the weekend. Herkelman picked up a forfeit over Melanie Cordero of Menlo College (Atherton, CA) followed by a 12-2 tech fall over Katie Bridge of Life University (Marietta, GA). Herkelman faced #1 ranked 130-pounder, Kayla Miracle of Campbellsville University (Campbellsville, KY) in the quarterfinals and lost by 0-10 tech fall. On the consolation side, Herkelman picked up a 17-6 tech fall over Addie Lanning of Ottawa University followed by a loss by pin to #3 ranked Jessi Kee of King University. In her final match of the day, Herkelman won by 15-4 tech fall over Rachel Young of OCU to place 7th overall and pick up her second consecutive All-American honor. Herkelman ends the 2015-2016 regular season with a 23-9 record and has two years of eligibility remaining.

Justice Losee of St. Ansgar at 143 pounds went 2-2 for the weekend. Losee faced Ilania Keju of OCU in the opening round and lost 5-12 followed by an 11-0 win by tech fall over Samantha Edwinson of Ottawa University. Lossee then pinned teammate Cherydan James, but lost by 0-10 tech fall to Carla Garcia of Missouri Valley. Losee ends the 2015-2016 regular season with an 8-12 record and as a Junior, has one year of eligibility remaining.

As we focus on the growth in the number of females wrestling at the high school level it is important to note that not only was there record participation this year, but participation included varsity competition in the regular season, sectionals, districts, and regional team duals.

There were 8 female wrestlers who competed at the varsity level in either the regional team duals or districts.

Class 1A, 2A & 3A REGIONAL DUAL TEAM PARTICIPANTS

Shelby Blake (113) a freshman from Osage-Class 2A.

Morgan Lawson (113) a sophomore from Ottumwa-Class 3A.

McKinna Faulkenberry (132) a sophomore from OA-BCIG-Class 1A.

Ciana Sonberg (145) a sophomore from Charles City-Class 2A.

None of the regional dual teams represented above qualified for state.

Rachel Watters, a senior from Ballard-Class 2A. Watters lost by fall to #9 ranked (IAwrestle rankings-February 1st) Xavier Miller of PCM followed by at 2-3 loss to Caleb Button of ADM to end her season.

Here are the complete high school results to end the 2015-2016 season:

-Please note that several of our records are slightly different from the record shown at Trackwrestling.com. On occasion, Trackwrestling will inaccurately count byes as wins in an athlete’s record. We only tally wins, losses and forfeits when counting an official record.

It has been a record-setting season and we are proud of what our wrestlers have accomplished. We will provide updates throughout the spring and summer on the upcoming tournaments:

Iowa has the opportunity to field a solid dual team at the USA Wrestling Junior Girls Folkstyle National Duals in Oklahoma City, Sunday March 30th as well as the USA Wrestling Lady Lincoln Women’s National Freestyle Duals in Tinley Park, April 15th. Historically the larger states with higher participation such as Michigan, California and Texas have swept these tournaments. We have started building Team Iowa and will be extremely competitive if we can get the participation we need to field a complete team. We are asking for our high school wrestlers to touch base with Charlotte at coach@femaleelitewrestling.com and let her know that you are interested in representing Team Iowa at these events.