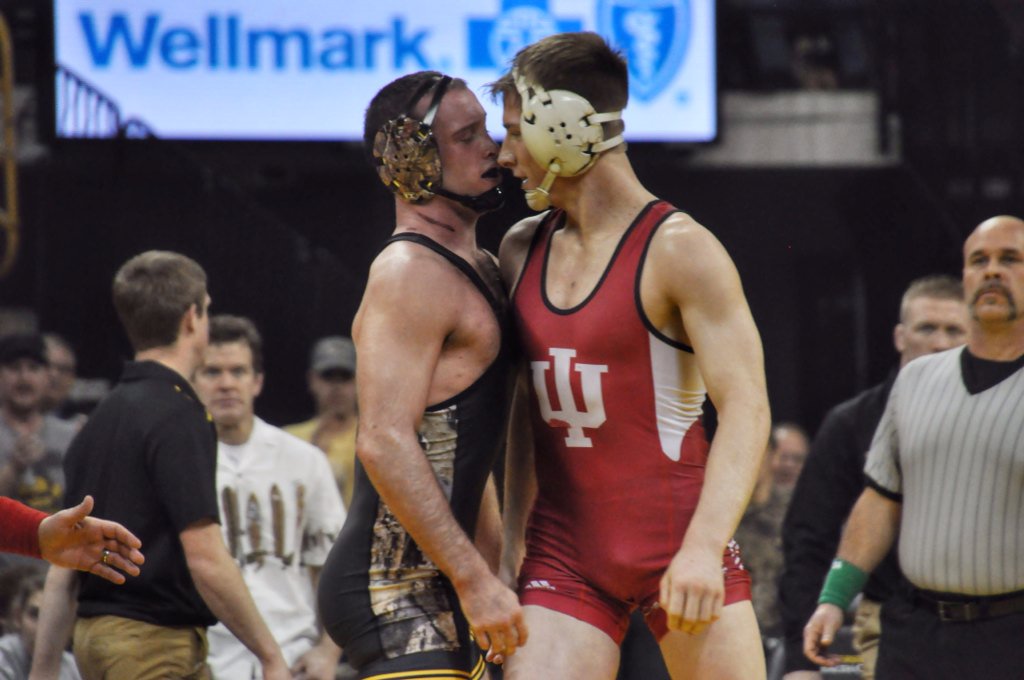 The Iowa Hawkeyes have officially clinched at least a share of the Big Ten conference dual title, with their 45-0 win over Indiana inside Carver-Hawkeye Arena. In addition to being senior night it was also camo night, with the Hawkeyes celebrating their ROTC program hitting the 100 years milestone.

For the first time this season Thomas Gilman was not the first Hawkeye out on the mat, that honor belonged to junior Cory Clark, who gave his team a 6-0 lead after receiving a forfeit at 133.

Brody Grothus was given the nod on senior night and after suffering a close defeat the last time out, Grothus came out and got his first Carver pin over Indiana true freshman Tommy Cash. Cash was making his first official start on the season.

Remaining undefeated on the season was sophomore Brandon Sorensen, who picked up a 4-1 win over Luke Blanton at 149. Sorensen’s offense started slow, and really never got going.

Iowa’s second senior Edwin Cooper Jr, took the mat at 157 pounds and after failing to pull the trigger last week, he certainly made an adjustment for this week, racking up a 13-1 major decision to put Iowa up 19-0.

Making it back-to-back seniors in the lineup for the Hawks was Patrick Rhoads, who got the nod at 165 over freshman Burke Paddock (Brands noted Paddock was dealing with an illness this week). Rhoads needed a late score, but was able to come out 4-2 in his bout.

In the night’s feature bout Alex Meyer faced off with #11 ranked Nate Jackson. It was a high stakes match, as a win by Meyer would most likely secure the #1 seed in the Big Ten conference over the #1 ranked Bo Nickal, with Jackson handing Nickal a loss in their dual earlier in the season.

And in being the night’s feature bout it certainly lived up to the hype, with Jackson taking an early 6-3 first period lead off three takedowns. Meyer was able to pick up an escape and takedown in the second period to knot things up at six. In the final period Jackson got an escape, but Meyer’s third period takedown and rideout sealed the come from behind win.

Brooks won 23-8 over his opponent setting up the last senior of the night, Nathan Burak at 197. Burak was able to show off his offense, winning by a technical fall, 23-6.

Sam Stoll was in a bit of unfamiliar territory with this match being the first dual in his Hawkeye career in which he was not the last match. Stoll was able to come out on top with a fall against Fletcher Miller (which re-took the team lead for the freshman).

Closing things out was Thomas Gilman, who dispatched Indiana’s only other ranked wrestler, Elijah Oliver at 125 with his 12-4 major. Gilman was able to overcome a slow start on the way to his win, and in the process capping off the shutout.

The win by the Hawkeyes gives them a perfect mark on the season in conference duals, which gives them their share of the Big Ten conference dual title. Penn State’s win over Ohio State tonight leaves the Nittany Lions as the only other undefeated Big Ten dual team, though they have Michigan State remaining on the schedule to finish the year.

Iowa will head west this next week for a dual with NAIA powerhouse Montana State-Northern.