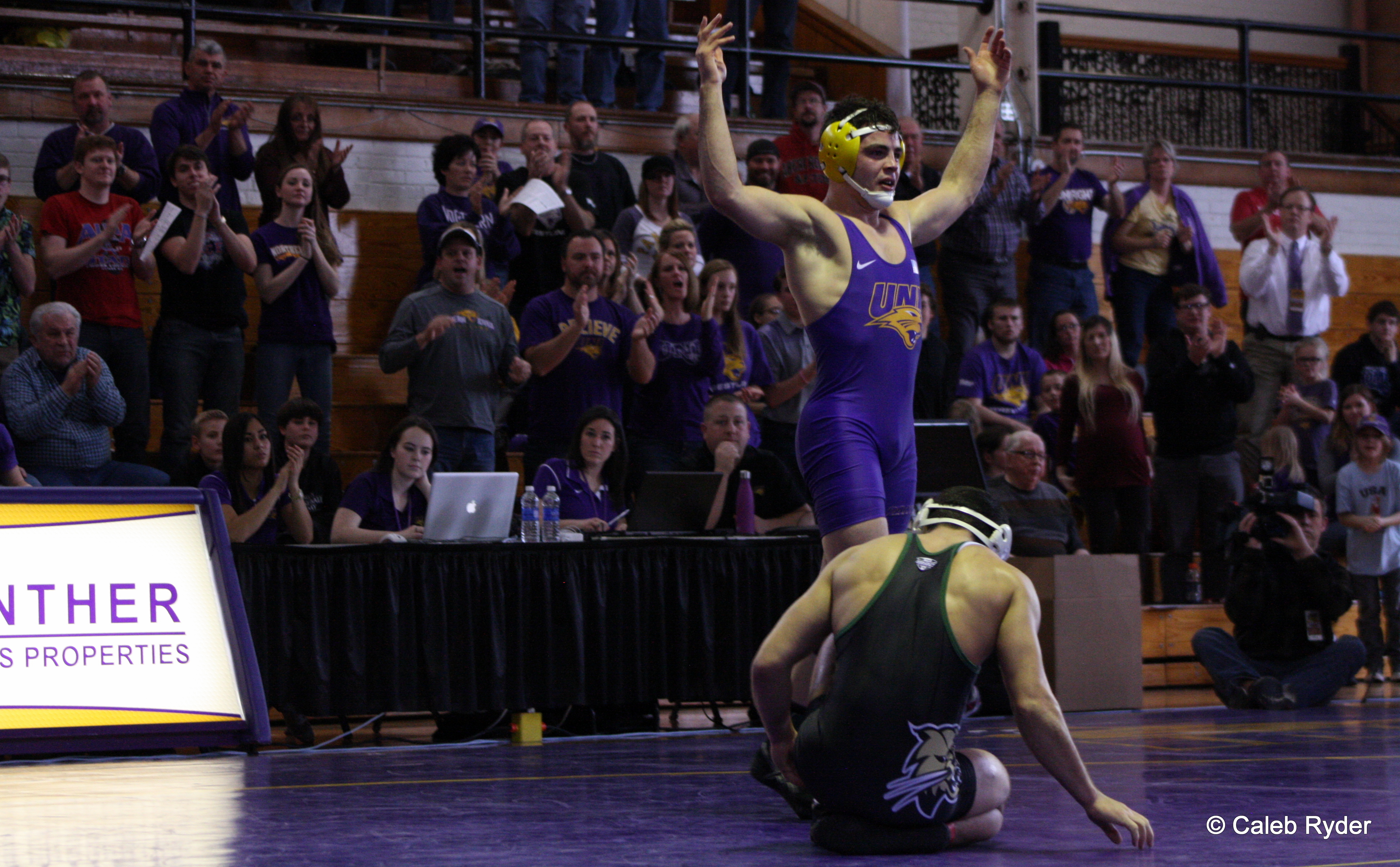 *Note before the preview: Both squads are really banged up with injuries, so I’ll do my best to preview potential matches, but don’t be surprised if we see a new face or two for either squad.

The University of Northern Iowa plays host to the last intrastate rivalry dual of the year for the division one wrestling squads in the state as #14 Iowa State comes to the West Gym on Friday night. Both squads are limping in to the dual a bit, with at least six potential starters on Friday night not expected to be seeing action this deep into the season. Iowa State comes into the West Gym ranked 14th in the country by Intermat, but before their dual with Central Michigan on Sunday they had lost three straight duals. UNI comes in on two dual losing streak, last winning at ODU in mid-January.

“I know our guys are excited to wrestle against Iowa State, it is a big rivalry, and I know our guys look forward to it,” UNI Head Coach Doug Schwab said Monday. “It doesn’t really matter what our record is right now, our guys are going to go

“We’ll push into Cedar Falls ready to take on UNI. Guys are excited about the opportunity, excited about wrestling that team,” ISU Head Coach Kevin Jackson said. “I think Coach Schwab has brought a lot of attention, a lot of excitement to that program.”

While ISU brings in two ranked wrestlers, UNI brings in four, but ISU will be favored in both matches between ranked foes. #8 Earl Hall has defeated #15 Josh Alber twice this season, both at the Cliff Keen Invitational in Las Vegas in December. #9 Tanner Weatherman won by pinfall against #13 Cooper Moore at that tournament as well. Both Panthers will look to turn those losses around in front of the home crowd.

UNI will be favored at 125 and 285 pounds. The lightweight, #7 Dylan Peters, won by pinfall against Kyle Larson the last time they wrestled, last year in Ames. At heavyweight Quean Smith hasn’t come out on the winning side against Cabell in two matches, but he has been one of the few to stifle Cabell’s offensive attacks. Cabell has defeated smith 5-2 in both their matchups.

The remaining six matches are all mostly toss-ups, and at a lot of the weights you have guys going that weren’t expected to start this year. At 141 pounds UNI was cautious about bringing Trevor Jauch back into action on Sunday after experiencing an injury during his match last Friday with CMU’s Zach Horan. Tyler Willers got the nod Sunday and lost a close match 10-4 with Noah Forrider.

Kevin Jackson’s squad last came to Cedar Falls two seasons ago, and he talked a little bit about the West Gym during his press conference on Monday.

“It wasn’t good [the last time ISU went to Cedar Falls]. They [UNI] probably had their best team that they’ve had in a long time. I just remember it being hot, and sticky, and the fans get pretty excited so we’re really, really excited about the opportunity to go back up there. It’s just an exciting, energetic, fun environment to compete in, it’s what you should look for as an athlete.”

We’ll be in the West Gym again on Friday night as the Cyclones take on the Panthers, action is scheduled to start at 7PM and we’ll have a live play-by-play thread going so you won’t miss any of the action!