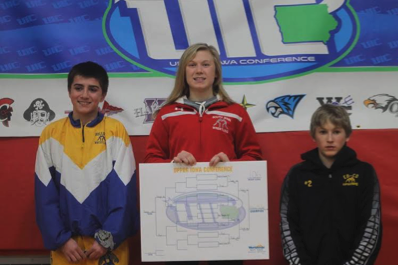 It is an exciting time of year for wrestling in Iowa and we are coming down to the final weeks of the college and high-school seasons. The college women are done with the regular season competition and are preparing for nationals. At the high school level, conference finals are complete and we look forward to districts, sectionals, and the state championships at Wells Fargo Arena.

The Women’s Collegiate Wrestling Association (WCWA) is the national governing body for women’s wrestling at the college level and oversees the sport regardless of NCAA, NJCAA or NAIA division. The WCWA College Nationals will be held in Oklahoma City, February 12-13 and will determine the National Champions and All-Americans. The top 3 finishers in each weight class will also qualify for the Olympic Team Trials to be held April 8-10 in Iowa City.

At the collegiate level, the only Iowan competing this week was Anna Poyner of New Hartford who wrestled at 130 pounds Wednesday night for Missouri Valley College (Marshall, MO). Poyner pinned Marissol Arrendndo to help propel MoVal to a 31-16 dual victory over Ottawa University (Ottawa, KS). There will be no additional collegiate-level competition until the upcoming WCWA College Nationals.

With the record-setting number of girls wrestling in Iowa we are starting to see some exciting firsts. This week we saw what is believed to be the first-ever varsity dual in Iowa that had two sisters wrestling two brothers. The dual took place at Ballard High School in Huxley and featured Nicole Watters, a 138 pound sophomore from Ballard wrestling Jaden Kampen, a junior from Humboldt. The next match included 145 pound senior, Rachel Watters taking on junior, Jaxen Kampen (Jaden and Jaxen are twin brothers). The Watters-Kampen rivalry ended with a Kampen victory by pin at 138 pounds and a Watters victory by decision at 145 pounds.

High school highlights since our last update include the following varsity performances:

Felicity Taylor, a sophomore from South Winneshiek picked up 2 pins, a 9-7 decision and a forfeit to go 4-0 for the week. This improved her overall varsity record to 27-17 and her JV record of 1-1 remained the same. Taylor placed first in the Upper Iowa Conference.

Shelby Blake, a freshman from Osage picked up 2 pins to go 2-2 for the week bringing her varsity record to 9-29 for the season.

Athena Moad, a junior from West Burlington/Notre Dame/Danville is a newcomer to the featured varsity performances. Moad worked a first period pin to go 1-2 for the week bringing her varsity record to 7-20 while her JV record remained the same at 1-2.

Rachel Watters, a senior from Ballard picked up a pin, an 18-3 tech fall, a 4-2 OT decision, and her first forfeit of the season to go 4-3 for the week. This improved her varsity record this season to 17-16. Watters placed 5th in the Raccoon River Conference.